It was a nice day on Saturday, and I had gone to downtown Minneapolis at the invitation of my friend, Lynn Elling, who gave a brief talk to Business students at St. Thomas University’s downtown campus.
(click to enlarge all photos) 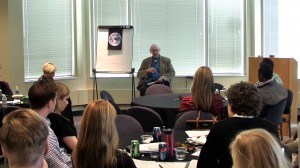 His is a near life-long passion for peace, for survival of the human family. This was born of his experiences as a WWII and Korean Navy officer; later viewing Hiroshima in the 1950s.
He walks the talk. His is a story with many chapters, and hidden pieces continue to be revealed as he goes through the archives of his 93 years.
This particular day he had along a recently re-found Declaration of INTERdependence, authored by Henry Steele Commager in 1975, and co-signed in support by the bi-partisan political and civic establishment of Minnesota May 1, 1976: Decl of INTERdependence001. (Click on the document to enlarge it; a link with some of the history of Interdependence can be seen here. Scroll down for the Commager declaration, the one affirmed in the Twin Cities in 1976.)
This was not the first Declaration signed by these leaders or others. The first one he showed me back in 2007 was a Minnesota Declaration of World Citizenship (1971) 1971 film produced by Lynn Elling is here). In 2012 it was a Declaration of World Citizenship for Minneapolis and Hennepin County (1968). And the most recent earlier discovery was President Lyndon Johnson Declaration of the U.S. as a World Citizen (1965), also affirmed by Minnesota leaders of the time. All of these were largely the doing of Lynn Elling and another Minneapolis businessman, Stanley Platt. In the case of the Hennepin County, Minneapolis and Minnesota Declarations, the United Nations was given special recognition, accompanied by the flying of the UN flag at the Hennepin County Plaza (1968-2012) and also over the State Capitol in St. Paul. 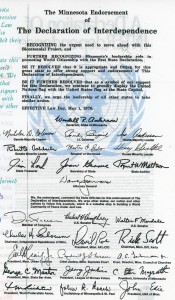 Supporting signatures on May 1, 1976 Declaration of Interdependence

What has struck me about each of these new (to me) discoveries, is that they happened at all, all coming during the era that we call “Vietnam”.
While the focus then was on making war (or anti-war); there was more than lip-service given to peace by political leaders, in this case, through acknowledging and building upon our InterDependence with the rest of the planet.
Today we remain mired in the era of presumed self-reliance, freedom from other than personal responsibility, victory by the strong, the vestiges of American “exceptionalism”. It is no accident that I publish this on the day of the NCAA Basketball Championship – celebrating the best of the best; only one in a series of such celebrations in our society, where individual or group excellence is rewarded, and national strength and dominance is hi-lited for a single winning team for one moment in time.
Commager and others back in a very difficult time in our national history set about to hi-lite another course; find another way for planetary survival.
We need to re-energize this ethic, for our survival as a planet. 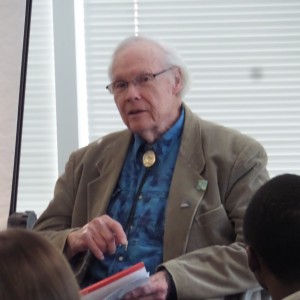 After Saturdays meeting, I crossed the street from St. Thomas to Target Corporations World Headquarters, I paused to take a quick snapshot of downtown Minneapolis. Many of the conversations which led to those older declarations took place in downtown Minneapolis amongst business, political and civic leaders.
Back in that St. Thomas classroom, Mr. Elling reported later, many students wanted to meet him, having photographs taken with him.
Such conversations need to happen over and over again….
We have no choice. The survival of more than simply the human family is at stake. 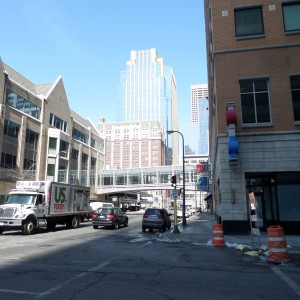 A final thought: we are a country basically run by what is called the “business model”, primarily of, by and for the benefit of business.
There are many aspects to this “business model”. Ascendant, especially today, is power through competition – “winning”. Money is the primary value.
Between 1965 and 1976, in the Twin Cities and Minnesota in particular, a very large group of businesspeople and others apparently embraced the intent of the declarations cited above. For a moment in time there seems to have been more highlighting of the power of positive relationships, local, national, international
There remain, doubtless, very large numbers of businesspeople and others who would still embrace this, but a much harder edged individualistic winner take all ethic seems to have taken control, at least for the moment.
Here’s to a new Declaration Generation, where action goes beyond simply declaring intent.
I think the base is available for getting back to this idea….
POSTNOTE: the model which took substantial root in the Twin Cities and elsewhere back in the 1960s and 1970s was inspired by a national group called United World Federalists – not a political party, rather a philosophy of national cooperation. You can read the history of this national organization here (see WFA 1947-97 History). GlobalSolutionsMN.org is the local successor of WFA.
https://thoughtstowardsabetterworld.org/wp-content/uploads/2022/04/thoughts-300x138-1.jpg 0 0 dickbernard https://thoughtstowardsabetterworld.org/wp-content/uploads/2022/04/thoughts-300x138-1.jpg dickbernard2014-04-07 04:25:012014-04-07 04:25:01#868 – Dick Bernard: A Declaration of INTERdependence
0 replies