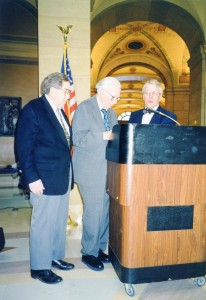 Saturday was a day for Politics in my community in Minnesota.
Four hours at midday was spent at the local Senate District Convention (DFL – Democratic Farmer Labor party), at which we listened to and endorsed candidates for state representatives; where we approved the resolutions to be passed on to the next level; and where a succession of candidates for assorted state or national office dropped by in the semi-annual whirlwind of seeking election in the fall.
Those who were there as delegates, yesterday, had participated in the Precinct Caucuses in February.
Running for office is a daunting task; Election to, and serving in, office is very, very hard work.
Many like to kick around “politicians” and “politics”, but even the most negative cynics would regret it very quickly if their fantasies were realized: that politicians and taxes and government just went away, slowly drowned in a bathtub, as a premier government hater has declared publicly, and successfully, for many years.
In my district, I’m thankful that JoAnn Ward is running for reelection for State Legislature, and Kay Hendrikson is running for the seat in the other area legislative district in my town.
Saturday March 29 is when the 2014 election officially began for the DFL. Citizens play a huge role in party politics, whether they show up, or not. Individual votes (or non-votes, as the case might be), will make all the difference in the world in November. Yesterday we citizens in attendance elected our representatives to the Congressional District and State Convention levels.
Now the hard, daily work begins.
Saturday night, along with what appeared to be well over 2000 people, we attended the Third Annual Humphrey-Mondale dinner of the Minnesota DFL party. The program is here: Humphrey Mondale Mar 14001 It was extraordinarily well organized and very interesting.
I’m Democrat – that’s no secret. Since the beginning of this blog in 2009, I’ve declared that affiliation at right on this page.
But it’s no secret that the politician I interacted most with was Republican Governor and legislator and businessman Elmer L. Andersen. We had a rich relationship by letters for the past dozen years of his life. From him came 55 letters of varying length and topic, which means he received an equal number of letters from me.
We were friends. We agreed much more than we disagreed. Our aim was to communicate, not change each others minds. But simply talking with persons with other views is helpful to clarify and perhaps even change personal views. Elmer L knew that, and so did I.
Elmer L. was an old-school conservative but progressive Republican in the best tradition of Minnesota and national politics, and at the beginning of this post is a photo of him receiving an Environmental award from his friend and legislative state government colleague DFLer Willard Munger, of Duluth.
Last night, at the DFL program, Paul Austin received the Willard Munger Award.
Unfortunately, we’re not back in the good old days, where politicians of both parties engaged in the tussle of partisan politics, but in the end found ways to respect each other and to compromise. I cherish the memory of Mr. Andersen and Mr. Munger together that April day in 1998. One photo doesn’t catch their friendship as it showed that day.
Some day, perhaps, we’ll relearn the lesson that politics is less about take-no-prisoners war, with winners and losers, as it is a process of fairly representing the interests of all, to work with, not against, the other.
There is a long road to recover any semblance of “the old days”, which really existed up to the 1990s, state and nation. Today’s college age kids have lived their entire lives in a deliberately cynical political environment, where government is portrayed as near-evil by its enemies. It will take lots of work to recover.
Finally there’s that quote that is the subject of this post: “We all do better when we all do better”.
This quote is attributed to then-Sen. Paul Wellstone, at a 1999 meeting in St. Paul. It is true. If the least among us do better, so do the high and mighty. But the high and mighty are doing so obscenely well these days, that it is easy for far too many of them to forget that fact; that pay-back will come in some form, some day, in a most unpleasant way.
Here’s the oldest photo I have of Paul Wellstone, sometime before he ran for statewide office, probably in the early 1980s, perhaps in the 1970s. He was a great man. 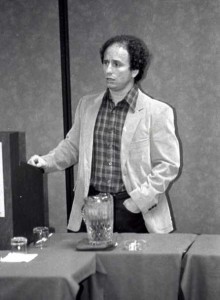 Paul Wellstone in his early days.

And here’s a couple of photos from the 1998 DFL dinner, at which Al Franken, long before he was Sen. Franken, was dinner speaker. Many DFLers will recognize the persons in the photos. 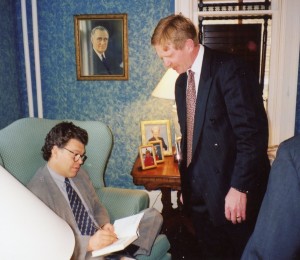 Al Franken, at left, April, 1998, before the DFL dinner. At right is Darrell Schmidt. 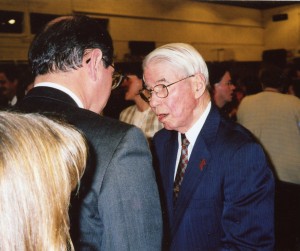 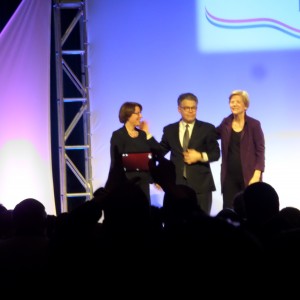 The 2014 election is about seven months away. Whatever your party, and whatever your attitude about contemporary political conversation, get engaged in all of the ways available to you.
Individual voters are the ones who in the end make the biggest difference.
You, yes YOU, will make the crucial difference this November.
UPDATE March 31, 2014: Overnight came a post about the influence of big money in politics, specifically focusing on casino magnate Sheldon Adelson. The post is worth a read. (“Just Above Sunset” is always worth reading, 6 days a week.)
2014 more than any other year in my lifetime, will be BIG MONEY against INDIVIDUAL VOTES. Sheldon Adelson can cast only a single vote on election day, as can I, so his strategy, and that of his fellows, has to be a focus on how to get ordinary people to work (vote) against their own interests.
It is richly ironic that Sheldon Adelson, among the biggest players in American conservative politics solely by virtue of his wealth, apparently made and makes most of his money off of gambling interests. Casinos never lose, though always attracting people who are sure that this time they’ll win.
Casinos are built on losers losses….
It all comes down to VOTES on election day in November.
https://thoughtstowardsabetterworld.org/wp-content/uploads/2022/04/thoughts-300x138-1.jpg 0 0 dickbernard https://thoughtstowardsabetterworld.org/wp-content/uploads/2022/04/thoughts-300x138-1.jpg dickbernard2014-03-30 20:59:052014-03-30 20:59:05#864 – Dick Bernard: "We all do better when we all do better"
0 replies