Dates for the 2015 Nobel Peace Prize Forum: March 6-8, 2015
Posts for previous days accessible here.
Today’s short and final session of the 2014 Forum was very interesting, beginning with a debate about the success or failure of the 113-year Nobel Peace Prize Forum, and ending with a very stimulating talk by 2011 Nobel Laureate Laymah Gbowee of Liberia.
In between was the final series of breakouts. My choice from among seven options was a well attended session, “Nonviolent Resistance: Still Relevant?” with Dr. Mary Elizabeth King of the University for Peace. Dr. King’s website is here. Her activism began in the Civil Rights days of the late 1950s and early 1960s.
As with previous days, today’s debate about the relevance of the Peace Prize as well as Ms Gbowee’s Laureate address are accessible on line. You can view them here. 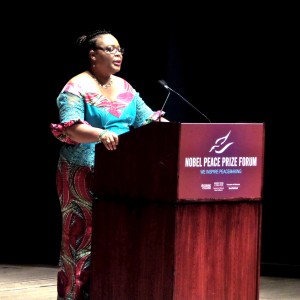 Ms Gbowee’s talk, and her answers in the following question and answer session, were particularly powerful and revealing, much different than I recall the focus of presentation of F.W. deKlerk on the same stage two years ago. The difference, perhaps, is more due to the fact that deKlerk, when he won his award with Nelson Mandela, was a career political actor in South Africa, representing, in effect, the ideology of the international political establishment in the years of Apartheid; while Ms Gbowee rose from common citizen to grassroots activist to one who helped change her nation, Liberia.
Both spoke powerfully from their personal framework of reference remembering their time in history.
And, of course, gender difference and traditional role differentiation between men and women plays a major part in the different ways of speaking, and differing priorities in prepared remarks.
Ms Gbowee had some powerful insights. I highly recommend watching and listening to her presentation.
She chose as her theme “how to reclaim our boundaries for peace”, a variation on the Conference theme: “Crossing Boundaries to Create Common Ground”.
The debate between Geir Lundestad, Director of the Norwegian Nobel Institute, and Jay Nordlinger, Senior Editor of the National Review, was more predictable. Likely the choice of who you felt won or lost the debate depended on your bias going in. 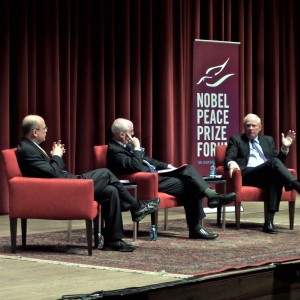 I happen to think that the Nobel Peace Prize has had a remarkably effective history, given how people organizations work and the fact of its 113 year history.
The Norwegian Nobel Peace Prize is easily the most well known of many variations on the Peace Prize, and, indeed, more well known than the companion prizes awarded by the Swedish Nobel Institute.
Prior to the event I printed out and read a March, 2001, essay by Dr. Lundestad about the first 100 years of the Nobel Peace Prize. It prints out at 25 pages, and can be accessed here.
Jay Nordlingers book about the Nobel Peace Prize can be ordered here.
Of course, Dr. Lundestad’s summary stops at the year 2000.
The Peace Prize recipients since 2000 are as follows:
2001 – United Nations and Kofi Annan
2002 – President Jimmy Carter
2003 – Shirin Ebadi
2004 – Wangari Muta Maathai
2005 – International Atomic Energy Agency and Mohamed elBaradei
2006 – Muhammad Yunus and Grameen Bank
2007 – Intergovernmental Panel on Climate Change and Al Gore
2008 – Martti Ahtisari
2009 – President Barack Obama
2010 – Liu Xiaobo
2011 – Ellen Johnson Sirleaf, Laymah Gbowee, Tawakkol Karman
2012 – European Union
2013 – Organisation for the Prohibition of Chemical Weapons 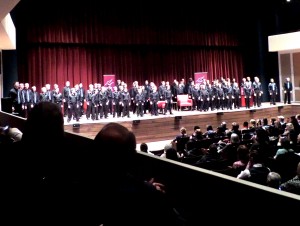 SOME RANDOM PERSONAL THOUGHTS ABOUT THE NOBEL PEACE PRIZE:
It is an honor for the Nobel Peace Prize to be criticized. This means they are doing something worthy of notice.
My own life work was public education, and since at least 1950 the National Education Association (NEA) has annually recognized a National Teacher of the Year, chosen from among nominees from state affiliates across the country, who in turn are nominated by millions of their peers at the school building levels.
Teacher of the Year is a grassroots up award.
The Teacher of the Year program has never purported to select the “best” teacher in the U.S.; rather, to honor a teacher who especially well represents the ideals to which all teachers aspire. “Teacher of the Year” is criticized too. But it has been and remains a wonderful program.
So, too, is this the case in the annual selection of the Nobel Peace Prize winner: someone/some agency spotlighted for his/her/their efforts for Peace, consistent with what likely was Alfred Nobels wish as imperfectly expressed in his Will.
To me, personally, it seems that “peace” and “war” are antonyms, not synonyms.
I am not aware of any “War Prize” (except for the t-shirt I occasionally see which declares the U.S. as “World Champion” for “winning” World War I and World War II.
In its imperfect way, the Nobel Committee, in its many incarnations over 113 years, has attempted to select a candidate or candidates who fit the written criteria established by Alfred Nobel himself, in his Will in the 1890s.
We are now a world of near 7 billion population, with near endless variations of increasingly sophisticated ways to destroy ourselves.
A Peace Prize is ever more important, every year, not just once in awhile. Seemingly increased emphasis on grassroots nominees like Ms Gbowee is as wonderful as it is essential.
When Alfred Nobel died (10 Dec 1896), the population of the world was less than one-fourth of what it is today, and humans were infinitely less sophisticated in their ways of destroying each other.
The carnage of war has increasingly been innocent citizens rather than formal military, and we see examples of this in each and every conflict.
In a profound way, someone like Laymah Gbowee exemplifies in effect the “World Citizen of the Year”, doing something noteworthy to make the world a better place, one community, one person, at a time. In many ways she symbolizes a “changing of the guard”, ethnic, nationality, position in society, which threatens the age-old status quo of white male domination. Of course, this increases push-back from those who ran things, but doesn’t change the result.
I have long treasured two timeless quotations which summarize my own feelings on this matter, and which have long began and ended my own website (currently being updated) to two citizens I admire, Lynn Elling and Joe Schwartzberg:
“Never doubt that a small group of thoughtful, committed citizens can change the world, indeed it is the only thing that ever has.”
Margaret Mead
“We must be the change we wish to see in the world.”
Gandhi
Neither Gandhi nor Margaret Mead ever won the Nobel Peace Prize but they, like every one of us, was fully capable of making a difference….
https://thoughtstowardsabetterworld.org/wp-content/uploads/2022/04/thoughts-300x138-1.jpg 0 0 dickbernard https://thoughtstowardsabetterworld.org/wp-content/uploads/2022/04/thoughts-300x138-1.jpg dickbernard2014-03-09 21:46:532014-03-09 21:46:53#857 – Dick Bernard: Final Day of 2014 Nobel Peace Prize Forum at Augsburg College.
0 replies