One previous post about the Minneapolis Metrodome is here. It was written on the occasion when the weight of snow tore a hole in the roof, and the cover collapsed.
Yesterdays news in the Twin Cities seemed to be dominated by the deflation of the Metrodome, home since 1980 of the Minnesota Vikings and the Minnesota Twins, as well as a long history of other major and not so major events. It was a soft beginning of the structures demolition: no explosives here; they simply turned off the engines that kept the dome inflated and it slowly settled to its death.
It was too cold, I suppose, to be much of a tourist destination, but the advice was to stay away and watch the event on TV: you can watch a time lapse here,all of 26 seconds. Here’s a one-minute intro to the future of the Metrodome area. (Both pieces are preceded by 15 second ads: the cost of watching….)
Yesterday afternoon, enroute to a meeting in northeast Minneapolis, a crash in the Hennepin-Lyndale area tunnel was causing traffic delays so I took an alternate route which led past the newly deflated Dome. There was almost no traffic, and I stopped in a vacant parking lot and took a photo for posterity.
(click to enlarge) 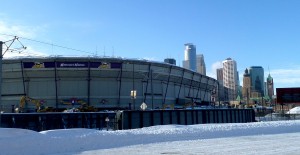 The Metrodome, occupied in 1982, was a perfectly functional facility. A main claim to fame I recall is that it was completed earlier than expected and built under budget.
I am not a pro football fan. I recall attending only two events at the Met, both Minnesota Twins (baseball) games, the first with my now-son-in-law the year it opened; the second some years later with my Dad. One time only, in the early 70s, I attended a Vikings game at Met Stadium (now Mall of America). This was before the days of jumbo screens above the action, and I was in the cheap seats, three rows or so up along the third base line, which was the back side of the end zone.
Those of us sitting there couldn’t see anything. We could watch the ball in the air when a pass was thrown; and watch the yard markers move. And we paid money for the privilege. It was enough for me.
That was then, one stadium ago.
Soon there will only be a hole-in-the-ground and a new palatial structure will take its place in downtown Minneapolis a year or two down the road.
The side show events, like the Monster Trucks, etc., will have to find another home. The Vikings will play their home games next year a couple of miles away at the University of Minnesota, outdoors.
As it happened, perhaps not so coincidentally, the day previous to the demolition the Vikings announced a new coach for next year. This new coach, like all new coaches before him, will bring refreshing and needed change, it is said, and the possibility of a Super Bowl victory, or so goes the hope-springs-eternal narrative.
But along with the new coach, the Vikings need a new Quarterback, too. That is the second leg of the Sacred Stool.
The third leg, of course, is the Owner, who oozes charm and money, but is loyal only to Profit – a shark.
Pro football is an ultimate capitalist prize, and the new stadium is mostly a perk for those who can occupy the most expensive boxes, not even required to associate with the rabble in the seats below.
Next year is the 54th for the Minnesota Vikings. Two new stadiums and a succession of New Coaches over the years has never led to a Super Bowl Championship….
Maybe the 55th year will be the charm, or the 56th….
Back in the fantasy world:
Today is the semi-final day where four teams vie for the 48th Super Bowl two weeks from now.
One thing is certain: love it or hate it, the U.S. comes to a halt on Super Bowl Sunday. It would take a nuclear conflagration at home to divert public attention.
Computer traffic will drop off to next to nothing here at home, nobody either sending or reading e-mails. The nations attention riveted on the Super Bowl of advertising!
It is as it is.
The earth movers are about the process of constructing a new Arena for the Gladiators of the North, the Minnesota Vikings.
https://thoughtstowardsabetterworld.org/wp-content/uploads/2022/04/thoughts-300x138-1.jpg 0 0 dickbernard https://thoughtstowardsabetterworld.org/wp-content/uploads/2022/04/thoughts-300x138-1.jpg dickbernard2014-01-19 09:31:582014-01-19 09:31:58#831 – Dick Bernard: The Metrodome Deflates….
2 replies