Directly related posts to Christmas 2013 are linked here.
Each year my spouse, Cathy, enjoys decorating our Christmas tree, and every year one of the first decorations up is one of the most plain, made by myself, some years before she and I even met.
Here’s both sides of the decoration:
(click to enlarge) 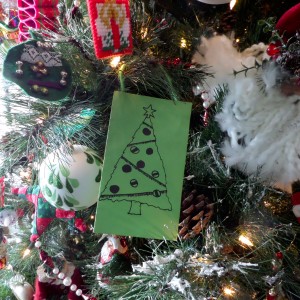 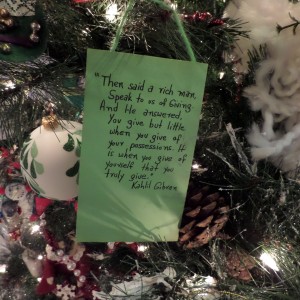 I remember all of the details surrounding this small card. It came to be during a difficult period in my life.
Back then, I had a printer do about 50 of these cards, and I used the U.S. mail to send them to a select group of family and friends.
The homemade card became a tradition for me, continuing in one way or another for, now, 36 years.
But it is a difficult tradition to continue.
At the beginning, the process was very simple and straightforward: you did something, and either hand-delivered or U.S. mailed it using addresses in your address book.
By the 1990s e-mail became common; and then came the present day explosion of means of communicating with the frustrating outcome that most of us have experienced in one form or another:
Fewer and fewer use U.S. mail and traditional cards exclusively. Each year there are fewer of these arriving in our mail box.
There’s e-mail, and assorted internet options, such as this delivery means, or others like Facebook, Twitter, and on and on and on.
Most people come to have their own personal preference for receiving/sending messages…and (probably) dislike other means.
I’m one who still likes letters, but most of my letters, this year, will happen after Christmas responding to others who sent cards, notes and Christmas letters.
Then there’s the Facebook crowd – I have lots of “friends” there, but I have never gotten comfortable with how best to use the medium, and as a consequence rarely even visit my Facebook page.
It’s my loss, I know, but I have only so much time.
Then there’s Twitter, Linkup, and all the rest. Great tools (I hear) if used.
Years ago I seem to have coined a phrase that remains true today: “there are more ways to communicate less”. This is enshrined on the internet going back to Nov. 2008, but it actually has its origin for me several years before that.
Christmas Day is now about over in my part of the world, so once more to everyone who might possibly be in reading distance, I hope you had a Merry Christmas, and that you have a great New Year.
POST THOUGHTS ABOUT THE ALLEGED “WAR ON CHRISTMAS”:
When I did my card in 1977, there was no thought of including or excluding the Christian idea of Christs birth as the origin of Christmas. I was and remain an active Catholic; I noted just now that Kahlil Gibran was a Maronite Christian from Lebanon.
The Christmas tree apparently has Christian origins. Initially, the personal tradition was to cut a genuine tree, and suffer through the latter days of needles on the carpet, etc.
For the last many years, the tradition here has been an artificial tree, fancily decorated by Cathy, who will continue looking for new and unusual ornaments. She does good work: 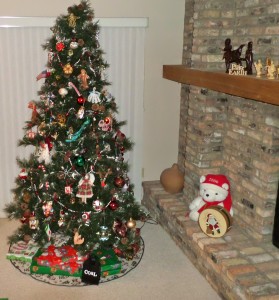 2013 Christmas Tree at the Bernard home.

We accompany the tree with a traditional nativity scene, carved olive wood, which I purchased in Israel, from a Palestinian merchant, in 1996. It is accompanied by Mary and Joseph carved by a Haitian ca 2003. 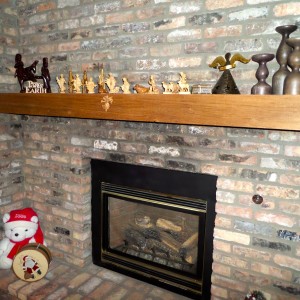 Some years ago my Uncle allowed me to borrow a collection of several hundred post cards sent to the North Dakota farm in the very early 1900s. This was a very Catholic family. I looked through the cards, and discovered the topic of Christmas, and other, greetings back in that period in time. You can read the entire article here. Of the 111 “Christmas cards” in the collection, less than 10% had a religious theme to them. This contrasted with Easter cards, which were about 40% religious.
We are and we have always been a diverse country in terms of religious beliefs.
“War” is a relatively recent construct, at least as it is played out in the media.
May there be Peace on Earth, and Good Will towards ALL.
https://thoughtstowardsabetterworld.org/wp-content/uploads/2022/04/thoughts-300x138-1.jpg 0 0 dickbernard https://thoughtstowardsabetterworld.org/wp-content/uploads/2022/04/thoughts-300x138-1.jpg dickbernard2013-12-25 20:51:582013-12-25 20:51:58#818 – Dick Bernard: A Christmas Tree Decoration. Some thoughts about Christmas time.
0 replies