NOTE: Permanent “file cabinet” on the Orchestra issue is here.
Twenty-four hours before I found my seat at the Ted Mann Concert Hall Saturday evening October 5, I was at the closing reception at the Will Steger Exhibit at the Minnesota College of Art and Design.
I was fascinated by the artifacts, and at 7:20 p.m. (so says my camera clock), I lingered at Will Stegers map of his Transarctic Expedition route in 1989-90.
(click to enlarge) 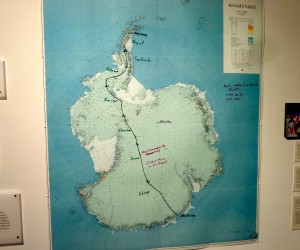 Will Stegers map of the Trans-Antarctic Expedition crossing 1989-90.

What an accomplishment that was.
I had never met Steger in person, and this evening, October 4, I briefly met him, and gave him two dozen snapshots I had taken at his welcome home at the Minnesota State Capitol March 25, 1990. He seemed genuinely interested in the photos, and lingered especially at my photos of two of the sled dogs from the expedition, which he remembered by name. To Steger, they were not dogs, they were team members with great value. Here they are: 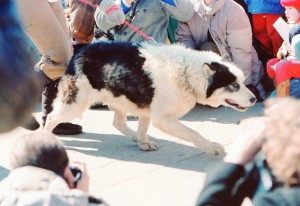 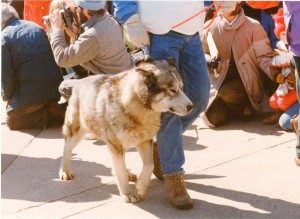 One of the multi-national support team for the Trans-Antarctic Expedition, Christine Loys of Paris, was at the reception. She’s here making a movie about the French in Minnesota and has known Will Steger for many years.
After the reception I gave her a ride to her temporary home in south Minneapolis. She was reminiscing about events now 23 years in the past.
The 1989-90 expedition was a very big international accomplishment involving the cooperation of many countries and people…and dogs.
Christine remembered a particular event: the homecoming of the Expedition to Paris. Everyone including the dogs had flown from New Zealand to England, and their next stop enroute home was Paris. The human members were cleared, but the dogs were held in quarantine.
But those dogs were members of the team, and late at night it was Christine’s assignment to call French President Francois Mitterand at home and deal with the matter. Here she was an ordinary French citizen, rousting the President out of bed and, of course, the dogs were cleared instantly.
Without the dogs, there would not been a successful expedition. Nor would there have been a successful expedition without all of the team members, most of whom were not trudging across Antarctica. Nor would there have been an expedition at all, were it not for Will Steger and, likely, Jean-Louis Etienne, a French physician and adventurer who had, quite by coincidence, met up with Will Steger at the North Pole during Stegers Polar Expedition in 1986.
But what does this have to do with the Minnesota Orchestra, Maestro Vanska, and we the audience?
Everything, I maintain.
Saturday night, I would contend, the Minnesota Orchestra made it to the South Pole, sacrificing everything to get there. It was important to Maestro Vanska to be there in support, and he was there, and it was a glorious evening to be celebrated with we audience members, and tens of thousands more listening on Minnesota Public Radio.
But as with the Will Steger team, the Orchestra’s South Pole is only half way home.
When Steger and his teammates reached the South Pole, they still had a long way to go.
Everybody celebrated reaching the goal of reaching the South Pole.
But then the hard work continued, all doing their parts.
So it has to be for everyone of us who are confused, angry and concerned about what has happened to our Orchestra.
There are no greater or lesser team members.
We’re all in this together.
En Avant! (the motto of Minneapolis MN, “Forward”).
NOTES:
Friday 5:30-6:30 p.m. at the Ritz Theater in northeast Minneapolis, Christine Loys will have a program about En Evant!, her upcoming film about the French presence in Minnesota. The public is welcome. Will Steger will be one of the speakers. Here is the flier for the event: En Avant_Invite at the Ritz6. You can read/see more about Ms Loys project here, scroll to #4.
Will Steger’s website is here.
https://thoughtstowardsabetterworld.org/wp-content/uploads/2022/04/thoughts-300x138-1.jpg 0 0 dickbernard https://thoughtstowardsabetterworld.org/wp-content/uploads/2022/04/thoughts-300x138-1.jpg dickbernard2013-10-08 09:12:542013-10-08 09:12:54#786 – Dick Bernard: Now the really hard work begins: To the Musicians of the Minnesota Orchestra, Maestro Osmo Vanska and the Audience.
0 replies