Bizarre has become the normal in Washington D.C. politics, so it is easy to pretend “there they go again” – that it will all work out. One can only hope. But what if, this time, it’s the time for bizarre to become reality?
Do you favor the Shutdown of the U.S. Government if Tea Party terms are not met?
Yes or No.
I think the connection of Tea Party and Government Shutdown is appropriate, and I think there are only two choices: Yes or No. This is a very unusual position for me to take, since my entire career was in an environment of constant negotiation/mediation between people and groups of people with an intention to resolve disagreements.
My answer on the current Government Shutdown threat is NO.
Joni Mitchell catches best the reason for my answer.
Back in 1970, Joni Mitchell caught a wave with her wildly popular song, “Big Yellow Taxi”. You can listen to it here.
The refrain, adapted to todays Tea Party theme about wrecking government might be “Don’t it always seem to go, you don’t know what you’ve got till it’s gone, you [wreck] paradise and put up a parking lot.”
The current shutdown issue is dead serious. It is not a Republican/Democrat issue (though the Republicans embraced and indeed nurtured the anarchist fringe of free agents which calls itself (and is called) the Tea Party.)
Very recently I read a commentary in Atlantic magazine suggesting that we haven’t seen this dysfunctional a federal government for over 150 years. There has always been political conflict between political parties, but, similarly, there has always been negotiation of differences and in the end, a minimum of game playing.
We’re in a different world. The main conflict right now is within the Republican party. This is no longer a Republican/Democrat thing, and veteran Republicans concede this point. This is a “my way or the highway” Tea Party move. And it is dangerous to our very Democracy.
What’s happening in Washington, now, is a struggle between ME and WE philosophies: are we a nation of individuals accountable only to ourselves; or are we a nation accountable to each other, and together responsible for a decent civil society.
The Tea Party types I know are very heavily into the individual rights wing, with very limited responsibilities, and those responsibilities only if they fit within their rights framework.
They are a minority of the population, but they’ve wiggled their way into a position where they can disrupt our tradition of good government.
We will all lose if they win even a temporary victory.
Their brand of governance, which has been evolving since before the current “Tea Party” craze began, is take no prisoners, win at all costs.
Even for them, such a philosophy will not prevail.
But if your Senator(s) or Representative vote “Yes” to in-effect shut down the government in the next days or weeks, they ought to be history next time they’re up for election.
This country doesn’t need their brand of polarity.
NO on a shutdown.
UPDATE, Sep 30, 2013: A very long summary of where this issue is at this moment can be found in the overnite “Just Above Sunset” here.
*
A BRIEF MUSING ABOUT “WE” VERSUS “ME”
Little over a week ago I was out at the farm where my mother grew up. The farmstead is vacant now, and as happens familiar structures are deteriorating.
I usually take some photos. This trip the long vacant barn drew my attention, particular the old wooden stanchions for the twice daily milking of the family cows, usually by Grandma and Aunt Edith, sitting on three legged stools. I’m old enough to have experienced this before milking machines (which my grandparents never had, to my recollection).
(click to enlarge) 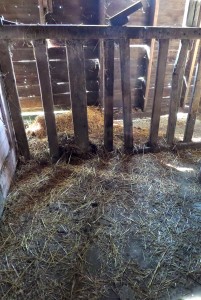 My grandparents were small farmers who, like most everyone else, bore the brunt of the Great Depression and the dry years. There were liberals and conservatives then, too, but living was a community affair back then. Others mattered, whether you liked them or not. It was a matter of survival, often.
Born in 1940, and a visitor to that farm from the beginning till now, I saw the slow progression: things like electricity, decent water, tractors, etc.
The stanchions have not seen milk cows for many years.
Six of the eight kids who grew up on that farm went on to college, possible then, even on low incomes.
Today, bigger has become a synonym for better, but the sense of community has suffered. If you have it, great; if you don’t, tough….
Enroute home, I happened to be in Wahpeton ND at sunrise on Sep. 21. I managed to catch the near full moon, setting, over Main Street. 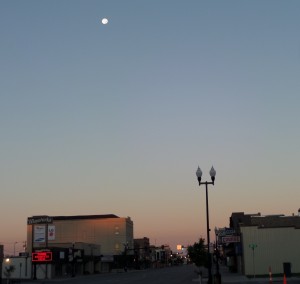 It was in Wahpeton, about 1955, when we all lined up to get the brand new Salk vaccine against the feared Polio.
It was, I guess, an early version of “socialized medicine” whose research was funded by government. There may have not been “Obamacare”, but people noticed communicable diseases, and attended to them as community problems, even then.
There are infinite examples of “WE” in our society.
We will rue the day when “ME” becomes dominant…or maybe it already is?
https://thoughtstowardsabetterworld.org/wp-content/uploads/2022/04/thoughts-300x138-1.jpg 0 0 dickbernard https://thoughtstowardsabetterworld.org/wp-content/uploads/2022/04/thoughts-300x138-1.jpg dickbernard2013-09-29 20:30:462013-09-29 20:30:46#780 – Dick Bernard: The Looming U.S. Government Shutdown/Tea Party. Yes or No.
0 replies