At the end of this post is the link to President Obama’s talk on the importance and implications of the Martin/Zimmerman case, and other links and comments.
*
July 6, enroute from Sykeston to Jamestown ND, I saw a huge American flag to the right, and a sign leading to Historic Ft. Seward just above Jamestown. I decided to stop and take a look.
(click on photos to enlarge) 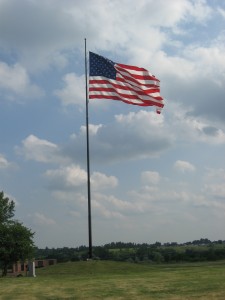 Ft. Seward, it turns out, was a short-lived obscure post Civil War encampment, largely built to secure the westward expansion of settlement through Dakota Territory. A YouTube video claims Gen. Custer was there before Little Big Horn. Maybe so, though he embarked from Ft. Abraham Lincoln in what is now Mandan ND area in 1876.
Nonetheless, the Stars and Stripes very impressively fly over the James River valley, with the substantial help of the constant North Dakota wind.
Much devotion is given our national banner. We pledge allegiance to “the flag of the United States of America“.
These dis-united days in our Republic, I sometimes think a more appropriate description might be the “dis-jointed state of Americans”. Even the term “balkanized” is too tame, since we are a society that has become fragmented almost door-by-door over infinite topics, the most recent highly publicized one being the case of State of Florida vs George Zimmerman.
We are, basically, very good, and very caring people. But we can, and do, these days tend to fragment ourselves by our selection of what information to let in and keep out of our seeing and hearing.
We make our case on what we believe, and associate only with others with similar beliefs, others beliefs be damned.
On a societal level, many can and do “State-shop” to find out where they have the most rights and least responsibilities. More of us have the financial means to personalize our selections than perhaps any society in human history, including our own U.S. society of the not too distant past.
We reverence winning, with little concern for those who lose, and the winners get stronger and more dominant every day….
In the process we have come to possess, in my opinion, a very dangerous luxury which in time will come to destroy us if not monitored and adjusted. We are less and less a “society”, a “United States” than a society of individuals. We don’t have to talk with or listen to anybody who doesn’t agree with us. We can attempt to legislate our personal opinion (called a “win”) in the short window of opportunity available; but the temporary win leads to potential for a later loss.
Earlier today, a friend and I talked a bit about the “olden days” in which we lived, before even television, before telephone converations were private.
People were much the same, then as now, but did not possess the dubious luxury available to too many now: of “winning” their notions of a perfect world, unaccountable to others not as fortunate as themselves.
Where from here? Here’s an alternate view visioned by some unknown person at a past time.
About 20 miles before Ft. Seward on that same July 6, I decided to take a short side trip in tiny Pingree ND, a place where my family had lived for a single year, 1942-43.
On the side of a deserted building, there, was the project of somebody, sometime, expressing an ideal that we might well pay more attention to. It is a stylized American flag – the second flag referred to in the subject of this blog. I took a photo, note the text: 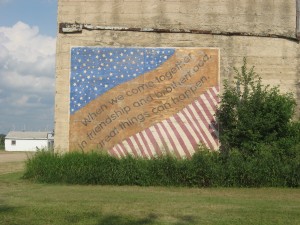 Since its beginning in 2009, I’ve captioned this blog, “Thoughts Towards a Better World”.
The photo of the flag with a message captures the spirit of that thought nicely.
Additional Notes:
In the matter dominating the air in recent weeks, Florida v. Zimmerman, today came a very interesting description of how Abraham Lincoln viewed “stand your ground” in 1838, 175 years ago, long before he even thought of becoming U.S. President. (What he said is in the last couple of paragraphs, but the entire article is well worth reading in context with the present day.)
Also, today, President Obama spoke from the heart about the need for a national conversation on the issue. The video of his remarks is here. An editorial about the Presidents remarks from the New York Times is here. Lots of the comments from anonymous types are as revealing as they are troubling. Racism is alive and well in our society.
My personal thoughts on Martin/Zimmerman filed on July 15, 2013, here.
Comments:
from Shirley, July 20, 2013: Morgan Freeman – I agree! (link here)
from Dick, in response to Shirley: Good one. And it’s even true! http://www.snopes.com/politics/quotes/blackhistory.asp
One of many best lines in the Presidents talk was the reference to his daughters and their generation (which would be my grandkids generation). By and large, the kids get it far better than we ever will.
Unfortunately, I doubt we’ll ever reach the ideal posed by Morgan, who’s an immensely successful black man.
We have an entire history as a country to deal with. We were founded as a state that depended on slavery.
But, we march on, by bits and pieces. Thanks much.
Here’s a very long and excellent column about the President’s Talk, yesterday.
from Jeff, July 20:
The cult of individualism in the large sense (not the one referred to by right wing moral majority types) is a major factor in our nations changes.
You know that sociologists have studied the lack of communal civic engagement, i.e. the decline of bowling leagues, neighborhood groups, organizations like Elks, Kiwanis, etc.
I believe that conservative 1% and the ethos of the supreme court’s conservative majority supports dis-unity and balkanization in its reverence for states rights, and individualism(selective of course).
This is expressed thru the decline in societal spending on public education at all levels. I honestly believe this is if not expressed but implied in the entire Conservative political movement from the 60’s thru to today. (Maybe demography will eventually override it, maybe the current Republican tea party etc is the final “stand your ground” act of this before a different peopled nation overcomes it.)
Basically in the past 20th century there were two places where all people commingled and had to “put up ” with each other. The first was the armed services which thru the draft put everyone together. The second is/was the public school system.
The Draft was done away with more by the left, the public school system is being starved by the right.
from Mike, July 20:
Your comments are often thought provoking and always interesting. I’m not surprised the state’s case was poorly presented. In trying a case, the attorney must believe in the justice of his case. Did the Assistant DA trying the case really believe his cause was just? We can’t read his mind, but we look at how his argument was presented.
The case was in Florida, after all.
From Dick, in response to Mike:
I think the Florida folks did what they could. I spent a career representing people, and a constant was second-guessing oneself, and being second-guessed. It is an imperfect deal, but the best we’ve got.
From Bruce, July 20:
I’ve just finished reading Ann Petry’s, The Street. I’m not sure why I choose to read it, but I was on my way out of town and needed some reading material to distract me from our worldly condition. It was written in 1946 and it’s about racism in America. I wasn’t thinking about the Zimmerman trial or the “Stand your Ground” laws at the time I saw the book on the shelf in our downstairs hallway. I remember buying it several years ago and not having read it, so I decided to try it out. What a surprise. Take all the crap of the Zimmerman trial, “Stand your Ground”, and Obama’s off the cuff, candid talk on race, and forget about it and read this novel.
For those who think racism in America has improved since the time Petry wrote this novel, think again. I think Obama should read this book before he talks about racial progress. What we’ve done as a society is disconnect racism from the over-riding American Values. We’ve separated it from materialism and competition for material wealth which provides power to dominate. We default to the position that in America everyone regardless of race, etc. should have the opportunity to achieve material success. So we create civil right laws, fight wars to make sure the right to opportunity is achievable. We don’t question the underlying cause of racism in America, which is the quest for materialism that is supported by the free market place, and places everyone in competition for material success. I think that should have been the conversation that Obama should have started with his gifted rhetorical skills. To put it bluntly, it’s the economic system of capitalism and the free market place that the president supports that is responsible for how we treat each other.
The Street, along with The Great Gatsby, and Howard Zinn’s, The Peoples history of America, should be on everyone’s reading list. The President’s message was for those who want to feel good. It wasn’t based in truth. It obscured the truth.
https://thoughtstowardsabetterworld.org/wp-content/uploads/2022/04/thoughts-300x138-1.jpg 0 0 dickbernard https://thoughtstowardsabetterworld.org/wp-content/uploads/2022/04/thoughts-300x138-1.jpg dickbernard2013-07-19 19:34:252013-07-19 19:34:25#748 – Dick Bernard: Two American Flags. What does the "United" in United States of America mean?
0 replies