Anne M. Dunn is a long-time and wonderful friend, an Anishinabe-Ojibwe grandmother storyteller and published author. She makes her home in rural Deer River, MN, on the Leech Lake Reservation. She can be reached at twigfigsATyahooDOTcom. She has three previous posts at Outside the Walls. You can read them all here.
If you have an interest in publishing something at this space, contact dick_bernardATmsnDOTcom.
Feed The Dog
It happened during the Fish War*, on April 24, 1993, that I found myself at the East Lake Community Center, Mille Lacs. David Aubid, of Rice Lake, had brought out the drum. Several men joined hands across it as though they sealed a sacred trust.
Slowly… quietly… the circle around the drum enlarged and the heartbeat rhythm called us to unity.
Of course, there was a feast. Of course, walleye was served. Of course, Esther Nahgahnaub prepared an excellent road-kill beaver roast. Of course, I wrapped a piece in fried bread and enjoyed an outstanding sandwich.
Then after a long day of rain, the sky cleared and the stars came out. Later we would see a feather moon rise cardinal.
But first… the caravan formed.
We followed a procession of red lights through the dark night. As we crested the hills we looked back at a hundred headlights strung like beads on a serpentine string.
The first part of this Ride-For-Rights took us to Malmo. I was surprised at the extent of media coverage this event had attracted and I tried to ignore the cameras as the drum quietly called us to gather. The media lights were blistering bright and seemed to lacerate the friendly darkness.
Shoulder to shoulder we stood, engulfed in the sacredness of the moment, encouraged by singers of ancient songs.
But having just attended a non-violence witness training session, I grew a bit uneasy. We had been warned that there could be trouble. So I decided to check out the person standing behind me.
This is when I saw that which is now imprinted on my mind like a favorite photograph from an old album.
The drum, the singers, and ‘the first people’ were surrounded by the Witnesses for Peace. They formed a wide circle around us. Their white arm bands shone like emblems of valor. Their shoulders pressed back like brave defenders. The ring of young, pale, flint-like faces reflected their corporate determination.
Turning back to my own circle… I felt my heart rise into my throat and a comfortable old smile settled into the familiar lines that time had etched upon my aging face.
When I heard the old ones talking, when I heard them telling of the past and wondering what will be. They said, “The young ones must soon take up the battle.” They say, “We are ready to hand the struggle over to the next generation.”
Sometimes they are concerned that the young ones are not prepared to fight, that they have become apathetic. Sometimes they fear that supportive elements of the larger society will grow weary of our efforts to find justice in our own land.
But we have stood within the circle of healing. I have seen a microcosm of all nations standing together. I have seen them gathering under a feather moon rising cardinal over dark waters against a black night. Therefore, I know we are not alone on our journey toward justice, peace, freedom and human dignity.
Many who stood in that circle that night are gone now. But they left us with instructions. “Do not forsake the future. Our children rely on you to continue our good fight for a better world. Not only is it too soon to quit… it is also too late.”
Some of you are thinking, “How can it be too soon and too late at the same time?”
I leave that for you to ponder. But believe me, if you give this question deep consideration you will have secured a universal truth that will serve you well from this day forth.
We are born innocent but over time we may find ourselves entangled in the mesh of social and behavioral disorders. These influence our path and determine our destination. But a timely word in a waiting ear can set us free.
When I was 19 years old a Lakota elder named Charlie Stryker told me something that set me free and changed my life.
“We enter the world with two companions. One urges us to do good, the other to do what is bad. These tendencies are like hungry dogs. Remember this, my girl. The dog you feed is the one that grows strong.”
Charlie gave me a universal truth that day. It continues to influence my path and determine my destination.
I guess all I really did during the Fish War was try to feed the right dog. Today and tomorrow I will continue to perform this small but meaningful ritual. That is how you help change the world. You keep planting seeds, the sky sends the rain and earth gives the increase. You scatter good seeds of worthy ideals on fertile ground and wait for an abundant harvest. Of course, there is the possibility that you will not live to see the results of your efforts.
Several years ago my grandson Brandon and I planted a small community of red cedar. Afterwards I told him I probably would not live to see them grown.
“I’ll come and check on them,” he promised. “I’ll remember how we did this together.”
However, he was murdered when he was 17 so I return alone to appraise their growth. Those trees are already much taller than I and still growing.
Bye-bye now. Don’t forget to feed the dog. 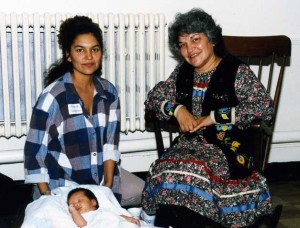