If you don’t know the names in the subject line, this isn’t for you.
If you think this is about legislated gun control, it’s not….
For the last few days the trial has droned on in Sanford FL. About the only time I’ve actually seen it is at the gym, where the silent images pass by on the screen as I exercise, with some closed captioning.
At some early point the trial will go to the Jury, and a decision will be rendered.
I keep thinking of the guy I saw during the heat of the gun control debate at the Minnesota State Legislature on February 21, 2013.
(click to enlarge) 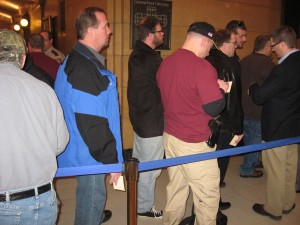 Of course, the guys point was not to pull his weapon and shoot somebody.
His point was, “don’t mess with my right to carry this thing around”.
He wasn’t terribly impressive, or impressing for that matter.
Like all the rest of us, he waited patiently to get into the hearing. I noticed later that his weapon was featured in a newspaper story. The gun became the story.
What I thought about, that day, was what would be the implications for him had somebody hassled him, and he had pulled out the gun and fired, and either hit his target, or missed and hit something else, maybe even just the wall of the Capitol building.
What would that Minnesota State Patrol officer the done – the one you can see perhaps six feet behind the guy with the gun.
Where would his power be then? Or would his gun give him any power at all; rather would it give him grief?
So, in Sanford, Florida, today, George Zimmerman is on trial for killing someone whose only offense, apparently, was that he looked suspicious that evening in February, 2012. Florida
law seems to mitigate in Zimmerman’s defense, but then there is the matter of killing somebody, Martin, who turned out to unarmed, and who would not have been dangerous had not Zimmerman took it upon himself to be the lawman of record in his complex.
The man with the gun won in Sanford that night in 2012; and it is possible that he will in court as well.
But if he prevails, what will he “win”?
Worst case, had he been unarmed, and doing everything identically that night, he would have been beat up, like happens every day in intemperate fights between angry humans.
That gun, whether he wins or loses in court, solved nothing for him.
As a gun solves nothing for the folks who think it is important to have their own private arsenal to defend against whoever it is they think they’ll have to defend themselves against.
Here’s that photo from February 21 again.
What would that guy have won, that day, if he’d found it necessary, by his own definition, to use that weapon?

Full disclosure: I qualified as expert with an M-1 in the Army, I don’t own a gun, never have, never will, I didn’t think gun control (getting rid of guns) was a practical or possible resolution to the gun issue, though I favored stronger regulation of weapons, particularly background checks and registration of all weapons.
https://thoughtstowardsabetterworld.org/wp-content/uploads/2022/04/thoughts-300x138-1.jpg 0 0 dickbernard https://thoughtstowardsabetterworld.org/wp-content/uploads/2022/04/thoughts-300x138-1.jpg dickbernard2013-07-02 13:09:492013-07-02 13:09:49#743 – Dick Bernard: Trayvon Martin and George Zimmerman
0 replies

Establish a Peace Site, promote Peace #743 – Dick Bernard: Remembering Donald Koller, and a kid memory of The...
Scroll to top