Al Gore was in Minneapolis on Thursday, and while I’ve been to lots of speeches, including by Mr. Gore, and didn’t really need to go, there is something that draws me to such events. I got to Westminster Presbyterian Church an hour early, but turned out to be a half-hour late: I got a seat, but in one of two overflow spaces. The house was packed for the longstanding Westminster Town Hall Forum. 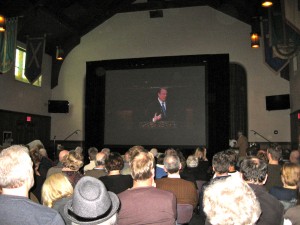 I won’t write a review of the speech: you can listen to it here. (This is the instant video of the speech. Mr. Gore’s portion begins at approximately the 40 minute mark). At about the ten minute mark is a 30 minute musical concert by a twin cities musician, who was also very good.
Neither do I plan to review Mr. Gore’s book, “The Future. Six Drivers of Global Change“, which is readily available everywhere, and is meant for reflection, discussion and personal action.
“The Future” is a book for thinking, not entertainment.
I’ve long liked Al Gore. He is a visionary, not afraid to articulate a realistic vision if we wish to survive as a human species.
Visionaries, especially prominent ones, are often viewed as threats, and are vilified in sundry ways by their enemies.
So it was with Gore’s An Inconvenient Truth which was released in 2006, ridiculed by his enemies. But as current events in our country are showing, the film has been in all relevant particulars true, if anything, even conservative. Yes, there are “yah, buts” in the film, but as an acknowledged climate expert said at a meeting I attended a year or two ago, he said the film was 90% accurate, and this was from wisdom of hindsight.
We saw Mr. Gore speak on An Inconvenient Truth a year before the film was released, in 2005, and it was a memorable, never to be forgotten event. Here’s what I wrote about it then: Al Gore July 2005001. It is remarkable that this was eight years ago, already. Of course, largely, denial continues to be a prevalent reaction to things like Climate Change.
In so many ways we humans live with short-term thinking (“me-now”) and we imperil not only our present, but certainly our future. “An Inconvenient Truths” dust jacket made some suggestions back then that are still relevant today. They are here: Al Gore Inconven Truth001
“The Future” covers numerous topics other than just climate change, and covers them well.
In his talk, Mr.Gore said he got the idea for “The Future” several years ago – 2005 I seem to recall – from a question someone asked at a presentation he was making somewhere in Europe.
From that seed grew extensive research and reflection.
Mr. Gore suggests – that’s all he can is suggest – a wake-up call.
To those who think the cause is hopeless, he asked simply that we remember changes like Civil Rights in this country, which in his growing up days in Tennessee would not have been seen as a possibility either. It is the people that will change the status quo, he said, recalling a particular learning moment in his youth when a friend of his made a racist comment, and another friend told him to cut it out. It is small moments of public witness like these that make the difference, he suggested. He gave other examples as well.
Of course, Gore is a prominent world figure, a former Vice-President, and now a very wealthy man.
But in his appearance, yesterday, he was part of us – he even stopped by the overflow rooms before his speech to give a personal welcome. It was a nice touch, we felt.
By our demeanor – I like to watch how audiences react at events like this – we were very actively listening to him.
It’s past-time to get personally involved, but never too late.
(click on photos to enlarge) 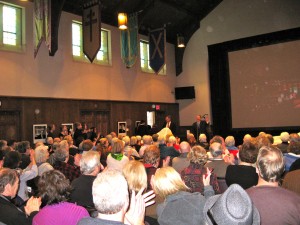 Mr. Gore stops by one of the two overflow rooms prior to his speech.