UPDATE: August 14, 2012: This post was written July 23, 2009. Last month, James Skakoon visited the ND-Manitoba International Peace Garden, had the same general feelings I had, and when he came home searched the internet to see if he could find any opinions which were similar to his. He found my post, we got in correspondence with each other, and as a result, he submitted his own opinion, which was recently published in the Bismarck (ND) Tribune. You can read it here. (The text of this column is included at the end of this post.)
This is yet another reminder that results are possible: sometimes they just take a little while.
The original article follows:
See Updates at end of the original post.  Specific links, including contact information, are at the very end of the post.
A reader requested specific information on the location of the International Peace Garden.  Here is the link: http://www.peacegarden.com/maps.htm 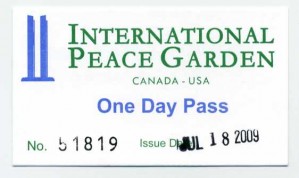 The first 25 years of my life – 1940-65 – I was a resident of North Dakota.  During that time, or since, I had never visited the famed International Peace Garden, which forms part of the boundary between North Dakota and Manitoba.  (The story of the Peace Garden, which was dedicated in 1932,  is at http://www.peacegarden.com .) 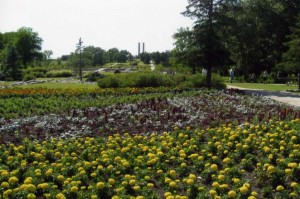 July 17-18 I was at a conference at Belcourt, ND, and noted that the Peace Garden was only 35 miles or so away.  On July 18, a beautiful summer day, I decided to leave my conference early, drive up to the Peace Garden, and then head back to Winnipeg, where we were visiting relatives.
I found a most beautiful, serene and interesting place…with some dissonance.
The Peace Garden essentially consists of two parallel sidewalks, straddling the international border with beautiful gardens in between.  Off to the sides, on both sides of the borders, are scenic drives.  I had time to do the approximately one and one-half mile walk, from end to end.
About half way down the American side, off to my left, I saw a pile of what looked like construction debris.
Coming closer, I saw a plaque with the headline “Let Peace Prevail“ which described the rubble: “The International Peace Garden represents a unique and enduring symbol of the strength of our friendship as nations, our mutual respect and our shared desire for world peace.
“The events of September 11, 2001, failed to shake the foundation of our shared vision of peace and prosperity for all the word’s people.
“This cairn, composed of steel rescued from the devastation of the World Trade Center in New York , ensures the memory of this tragedy will not be lost and reminds us to cherish tolerance, understanding and freedom.
“Officially unveiled by the Honourable Gary Doer, Premier of Manitoba, September 11, 2002.” 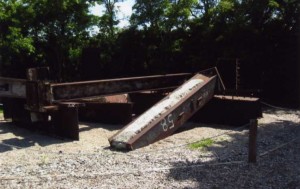 Girders from the Twin Towers at International Peace Garden July 18, 2009

It startled me to see this symbol of what seems to have become justification for Eternal Fear and War occupying this place of Peace, but there it was.  The park brochure, which I looked at later, announced that “in 2010, visitors will see the creation of our 911 Memorial Contemplative Garden sponsored by Rotary Clubs International….”
I continued my walk, reaching the halfway point at the Peace Chapel, near the Peace Tower and straddling the border.  The Chapel was dedicated in 1970 and is sponsored by the General Grand Chapter Order of the Eastern Star.  http://www.ndoes.org.
The walls of this simple and beautiful chapel include 56 quotations all on the most peaceful topics…but in each of the corners were displays of many front pages of international newspapers for September 12, 2001 all, of course, featuring the World Trade Center towers in flames.  To me, it was dissonance. 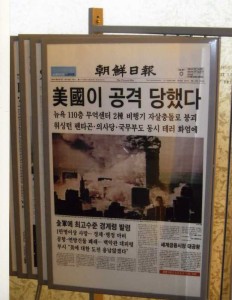 One of many worldwide newspaper front pages on display in the four corners of the Peace Chapel, primarily from September 12, 2001

I am glad I went to the Peace Garden, and I do think that its basic message remains as it was when it was dedicated July 14, 1932: “To God in His Glory.  We two nations dedicate this Garden and pledge ourselves that as long as man shall live; we will not take up arms against one another.”  It is “enobling peace”, but its overemphasis on the 911 tragedy is troubling, especially since that tragedy was used almost immediately to justify a war against Iraq, a country which had nothing to do with 911, and the war left huge moral and financial consequences for ourselves and countless other innocents.  “Peace” and “War” became synonyms, in effect.
All the way back to Winnipeg I kept thinking of those 9-11 displays.  I am still considering the letter I plan to send to the assorted officials connected with the Memorial.  I think I will suggest that it is time for those newspapers to leave the Peace Chapel; and that I hope great care is taken to not let a message of fear and war creep into the 911 Memorial Contemplative Garden which likely will surround the twin towers debris.
The drive from the Memorial back to Winnipeg was long and peaceful.  Entering the Red River Valley west of Cavalier on highway 5 I spied a gigantic concrete structure a mile or two off the road.  I knew it was there – I’d seen it before: a visible symbol of an earlier era of fear and loathing, during the 1950s era of guided missiles aimed at the Soviet Union from numerous places in North Dakota.  I went up and took a look.
Here it is:  The story is at http://en.wikipedia.org/wiki/Safeguard_Program.  Scroll down a bit for more on this particular site. 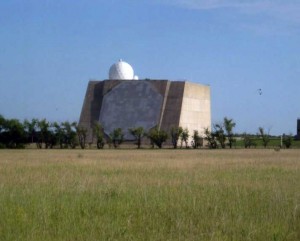 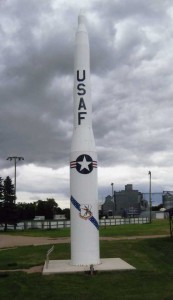 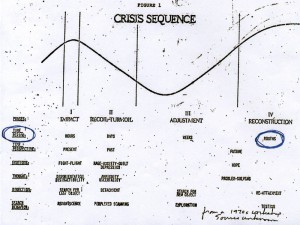 James Skakoon column in August 13, 2012 Bismarck Tribune (direct link is at beginning of this post):
The International Peace Garden lies in the Turtle Mountains between Manitoba and North Dakota. Its long central garden parallels the border, with one half in Canada, one half in the United States.
Approaching the Peace Garden from north or south, one can drive unimpeded into the garden grounds. Returning to either country, however, requires re-entering through Customs at the border crossings. This suggests that the International Peace Garden sits outside any national boundaries and is thus devoid of political and national conflict.
I recently visited the International Peace Garden. Although I had been there many times before, it has been some 40 years since my last visit. My expectations, however, had not changed. I expected a pleasant, beautiful, calming place where I could experience positive thoughts of peace and good will.
My expectations were quickly dashed upon seeing a gruesome memorial to 9/11 within the International Peace Garden. The memorial is centered around a mass of 10 damaged, twisted girders salvaged from the World Trade Center rubble. I was appalled to see something so incongruously out of place in a space dedicated to peace. The sight of these girders is hardly calming and not at all peaceful.
To be fair, the Carillon Bell Tower at the Peace Garden is dedicated to war veterans, perhaps suggesting a precedent for other memorials on the garden grounds. It was erected by the North Dakota Veterans Organization in 1976 as a bicentennial project. Also to be fair, an attempt has been made by the Peace Garden to make something positive, if not quite suggesting peace, out of its 9/11 memorial. For example, the headline on a placard at the display reads, “Let Peace Prevail.”
The winning entry of a student design competition for the area around the girders offered a message of “recall, reflect, remember, understand, forgive, and grow.”
This compassionate entry is the theme for the final display areas around the girders. But neither these elements, nor anything else about the memorial are likely to change our automatic emotional reaction to 9/11, and a memorial to veterans such as the Carillon Bell Tower is unlikely to evoke a similar reaction.
September 11th and its aftermath represent religious zealotry, terrorism, revenge, destruction, political strife, military and civilian casualties, hatred, and war. And yes, heroism, service, bravery, and loss as well. One peace-like word, cooperation, applies to the Western world’s response to 9/11 (although it was largely one nation imposing its political will on others). Then again, this cooperation led most prominently to waging a war.
At a Sept. 10, 2003, ceremony at the Peace Garden remembering the terrorist attacks, Kent Conrad, a U.S. senator from North Dakota, said of 9/11, “It was a day that roused a mighty nation to anger, and to action.“
None of this relates to peace, at least not now or in the foreseeable future.
I have no untoward contempt for memorials to human tragedies, wars, and other catastrophes. In Berlin, I visited the Memorial to the Murdered Jews of Europe (Holocaust Memorial). I cried. I visited the Vietnam Veterans Memorial in Washington D.C. I cried there, too.
I visited Wounded Knee, S.D., the site of an 1890 massacre of Native Americans by U. S. Cavalry. I cried again.
These memorials are either in their original locations or in spaces dedicated to and evoking their purpose. The same is true of every other memorial I have visited or can think of. Removed from its immediate context, the Peace Garden’s 9/11 memorial poignantly accomplishes its mission.
The articles of incorporation for the International Peace Garden, which was dedicated in 1932, state the purpose as “Creation and maintenance of [a] garden or gardens…as a memorial to the peace that has existed between the United States of America and the Dominion of Canada.” The inscription on the stone cairn at the entrance to the Garden pledges eternal peace between Canada and the United States: “…as long as man shall live we shall not take up arms against each other.”
A June 3, 2002, Manitoba government press release quoted then Manitoba Premier Gary Doer as saying, “The International Peace Garden is a magnificent and unique site and I can think of no place more appropriate or fitting for a memorial of this kind.”
Although Doer surely intended a purely positive comment for the 9/11 memorial effort, perhaps he should have examined the garden’s purpose beforehand. Everyone is allowed his or her opinion; some are quite different.
When I explained about the 9/11 memorial on the Peace Garden grounds to a friend, he replied, “9/11 doesn’t have to be everywhere.”
What 9/11 has to do with peace is beyond me. Visitors to the International Peace Garden should not have to be reminded of terrorism, hatred and war. This memorial does not belong there.
(James G. Skakoon is an engineer, inventor, and author. He was born and raised in North Dakota and now lives in St. Paul.)