Forty years ago today my attention was riveted on a man setting foot on the moon.  Six years earlier, November 22, 1963, a television news anchor named Walter Cronkite helped us through the agony of one of the darkest moments in my lifetime: the assassination of John F. Kennedy.  Somehow it seems almost fitting that the anniversary of the moon landing (July 20) and the death of the broadcast icon (July 17) came within days of each other.
Recollection of these separate events brought attention to the past, and to inevitability of time passing, and with it, change.
I was a young school teacher the day President John Fitzgerald Kennedy was shot and killed in Dallas.  My even younger wife had a few weeks earlier left her own teaching position due to what turned out, less than two years later, to be a terminal illness.  November 22, 1963, she was pregnant with our first child.
November 22, 1963, we lived in an upstairs apartment in a house near my school, and a short time before that sad day we had purchased (on credit) a 9″ black and white television.  At $10 a month, the television payment stretched our meager budget, but it was at least a window to the outside world for my wife.
That time in history is well documented and I would not pretend to add to any accounts about the person, Walter Cronkite, or the event on which he reported that day, the assassination of a President.
In those years, long before cable, internet, and hundreds of television channels, most country folks lucky enough to have television, perhaps had access to one or two channels whose signal came from very high transmission towers many miles away.  What we saw, then, would not pass anyones muster for quality in this day and age.  I know we received CBS, and thus heard and saw Walter Cronkite’s reporting  on the unfolding events during that dreadful time in our nation’s history.
Cronkite died last week at 92.  Shortly before November 22, 1963, he had celebrated his 47th birthday.  He seemed like a pretty old guy to me, then.  Our first child, Tom, was born February 26, 1964.  At his last birthday Tom turned 45, nearly Cronkite’s then-age.  Time flies…one notices….
July 20, 1969, is another day vivid in my memory.  I was enroute home from a visit with my parents in Grand Forks, North Dakota, and following the moon landing on the car radio.  Sometime in mid-afternoon, along U.S. Highway 2 between Grand Forks and Bemidji MN, I pulled over along the highway at the exact time the actual drama of the moon landing took place.  It was a powerful moment.  I had only the announcer and my imagination to help me live that moment.
Back home in suburban Minneapolis a few hours later, I watched Neil Armstrong set foot on the moon: “that’s one small step for man, one giant leap for mankind”.  I did my best to take a photograph of the television screen when Armstrong was on the moon.  Somewhere I have a copy of that photograph, in what passed for color in those days.   The image I saw that night has been replayed numerous times this day.
Those events in 1963 and 1969 were only two of the innumerable memorable events of the 1960s.  It was in many ways a tumultuous decade, but even more significantly it was a relatively carefree and simple time.  The seniors in the high school classes of 1964 were the first high school graduates of the post-war “baby boom”.
With all the problems of the decade, people had a sense of optimism about the future.  1984, the year portrayed in George Orwell’s novel of the same name, was 15 years in the distant future when Neil Armstrong set foot on the moon.  Today, that same year is 25 years in the past and we have come too close to experiencing some of the prophesies of that story.
Next year ends the first decade of the 21st century.
How will future generations remember us?  How optimistic about the future can todays youngsters be? 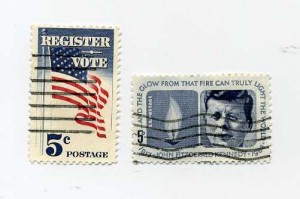