Sometimes, something is just too good to wait.
This morning I had the opportunity to re-union in St. Paul with Marion Brady.
Marion and I were long time members of a quality education e-list maintained by the National Education Association (NEA). We “met” on-line in the mid-1990s, and had only seen each other in person one time, when I stopped by his home literally across the river from Cape Canaveral in January, 2003.
Though it had a long run, the e-list passed on, as such lists do, but we continued to visit from time to time on-line.
Here’s we two today: Marion is the guy on the right (click to enlarge). 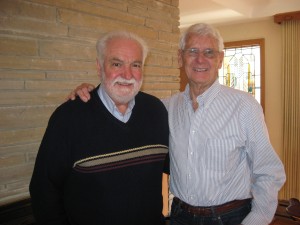 Our hosts, Wayne Jennings and Joan Sorenson, served a great breakfast, and we had a great conversation, one of those that makes time race by. Both Wayne and Joan were long-time innovative educators in Minnesota History of Ed Reform in MN. Wayne founded in 1987, and till 2000 owned, a Minnesota organization, Designs for Learning, long involved in facilitating institutional change in education.
We covered lots of ground in our time together.
Marion had been up to speak to a convention of an organization called MN Association of Alternative Programs. Wayne is ex-officio on the Board of MAAPMN.
I’ve been a fan of Marion’s work for many years. Though he’s retired far longer than I, he really never quit teaching and learning and writing. And his ideas make a great deal of sense. His on-line presence is here. He’s the absolute model of persistence – promoting his philosophy to whoever will listen, and achieving some success. He just keeps going, going and going….
For some years, Marion has written columns for the Washington Post’s Answer Sheet section. Ordinarily, he passes them along to me.
All of his columns for the Post, and many others, are accessible here.
It was a comment about one of those columns that caught my ear near the end of our visit.
I had mentioned the Answer Sheet, and he was telling me about a recent column he had written, December 5, 2011, that had gotten such an unbelievable response that the section editor had requested permission to interview the unnamed source to make sure that she wasn’t defending a piece of creative fiction.
Succinctly, Marion’s topic was what most would consider to be somewhat boring – testing of student proficiency.
This particular column, he was told, had gone viral, and there had been 1.1 million hits in the first 48 hours. Yes, a MILLION.
By now you’re curious, doubtless, so here is the specific column, with a link provided to the editors note about the results of her efforts to verify its contents.
For those of us who toil pretty anonymously in the vineyard of opinion, this column by Marion Brady is an object lesson in the value of persistence. Some day when you least expect it, you get noticed, and noticed, and noticed some more.
Of course, you don’t win the race unless you show up and run in it, but it happens more often than we imagine.
Earlier we had gotten around to talking about a landmark settlement achieved by a largely unknown group of women called the Women’s Equity Action League (WEAL) in the late 1970s.
Joan and I discovered we had both worked with what was called the Minnesota “WEAL Agreement” (WEAL Agree MN Nov 77001 )which has had a long term huge impact on practices to hire women as school administrators and social studies teachers in Minnesota public schools.
The agreement was an attempt to implement Title IX – affirmative action for women – in public education. A shero in common was Margaret Holden, then local president of WEAL.
What is common today was a very, very hard slog back then.
Joan mentioned the famous Margaret Mead quotation about the impact of small numbers of people: “never doubt that a small group of thoughtful, committed individuals can change the world. Indeed, it is the only thing that ever has.”
I had just given them my card, which refers to that quote at the top of my website page, and suggested they take a look there, AMillionCopies.info, where that very quotation has been sitting quietly for the last four years – just waiting for today.
Congratulations, Marion, and Joan, and Wayne, and all who plug along. 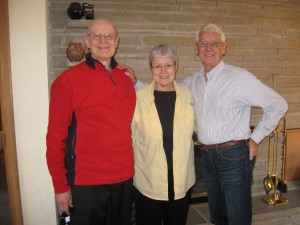