The week just past was  a planned one.
Tuesday afternoon, I was to attend the dedication of a new building and a Peace Pole at St. Paul’s Monastery in suburban Maplewood MN.  The event promised to give inspiration. http://www.stpaulsmonastery.org/
Wednesday through Friday was to be a trip to North Dakota to visit my Uncle and Aunt in the small town of LaMoure.  My cousin, Mary, watching over her niece, Gwen, who was seriously ill in a Minneapolis hospital, planned to go along if Gwen’s medical condition seemed to be relatively stable.
Saturday’s schedule included a three hour meeting in the morning; and an invitation to a combination wedding/birthday dinner celebration at the home of a friend in our city.
That was how the week ahead looked one week ago today.
Monday my good friend, Lynn, an officer on LST 172 in the Pacific in WWII, called and asked if I would represent he and his wife at a funeral in a rural Minnesota town about three hours away.  A friend of his, Melvin, aged 85, an enlisted man on that same LST so many years ago, had died tragically in a farm accident the previous week, and Lynn and Donna could not make the long trip.  It appeared that I could make the funeral and not miss the dedication on Tuesday. I agreed to go.
Tuesday came and went, a sad, tiring, yet very inspiring day.  The funeral was held in a packed church; at the cemetery an American Legion Color Guard, Taps; then lunch, back on the road and on-time to the dedication, which was even more inspiring than I had anticipated.  In both events, one sad, one happy, one saw the best of what our society has to offer, people gathering together in community, in peace.
At the end of Tuesday I called my cousin to see if she was on for North Dakota, and she was.  Gwen, while very sick, had had a good day on Tuesday, and things appeared reasonably stable.
We made the 300 mile trip west on Wednesday, went out to the ancestral family farm with our Uncle and Aunt, did some maintenance chores there, came back to town for hamburgers, and I turned in early, exhausted.
Thursday was more visiting and a little more work.  In the afternoon we came back to Vince and Edith’s apartment, and saw two notes taped to their door, both with my name on the outside.  The first was a message for me to call my wife; the second was more explicit, an e-mail with the stark announcement that Gwen, 36, mother of two youngsters, had died earlier in the day.  It is at such moments that it is important to have people around, and the four of us, at that moment, happened to have each other, outside an apartment door in LaMoure, North Dakota.
We rested for a bit, and came back to the apartment to have supper, and all of us were invited to join a birthday party there, put together by the family of an 89-year old lady who’s also a resident in the apartment community.  The festivities helped take minds off back home.  The three F’s: Food, Fun, Family are simple necessities of life: things we all deserve, but not all have.
Mary and I completed our visit and returned home on Friday.  Tentative plans she had to visit some other relatives enroute back were put on hold.
Today, I went to the meeting, which went well.  Later my wife and I attended the family celebration of a wedding and two birthdays.  It was a festive, happy event.
Tuesday we go to Gwen’s funeral in a nearby town, a week after the earlier funeral.  There will be differences and similarities between the two leave-takings from life, but basically they will be very similar: acknowledging and remembering the contributions Melvin, and now Gwen, each made to their families and their communities.
A few miles from Tuesday’s funeral, at St. Paul’s monastery, a new Peace Pole*, with the words “May Peace Prevail on Earth” in twelve languages, will bear silent witness to the best that resides in humanity.  St. Paul’s is a Benedictine institution; the Benedictines emphasize hospitality.  (My Uncle and Aunt in LaMoure are fortunate to reside in a Benedictine residence.)
John Lennon sings his composition”Beautiful Boy” at  http://www.youtube.com/watch?v=Mrfi8-9JVtE.  This song was composed about 1980 in honor of his son, and includes the oft-quoted words in the title of this essay.
At the Tuesday dedication at the Monastery, a musician closed the program with another John Lennon song, “Imagine”, written in 1971.  It, too, seems appropriate on this day. http://www.youtube.com/watch?v=okd3hLlvvLw 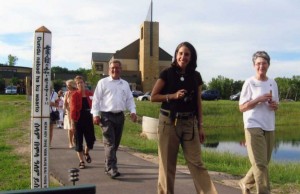