Related posts here and here.
Monday I hoped to see Air Force One approach and land at Twin Cities International Airport. I got a late start, and missed any opportunity I may have had.
About 11:30 I went by the airport enroute to visit a friend of mine in a Twin Cities Nursing Home. When I got to Greg’s room, he was watching the President in Cannon Falls MN, and he and I watched the hour together. It was a special time. 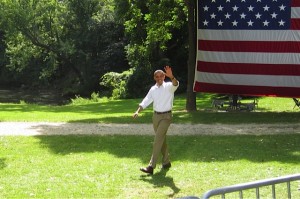 Greg and I watched as the President talked about “Obamacare” (a term the President said he’s proud to own), and dealt effectively with the recent news that an Appeals Court had ruled that a federal requirement for people to pay for insurance they don’t want violates individual constitutional rights.
Greg may have had something to say about that topic, though we didn’t talk about it.
Greg and I volunteer together, so I don’t see him that often. I knew he’d been ill, but I thought he was getting better. He’s five years younger than I.
At church on Sunday I asked Greg’s son how his Dad was doing, and it was then I learned he was in the Nursing Home. It was a shock.
It turned out that Greg had been hospitalized with a treatable illness in May, and one thing led to another, and another, and another. Three months he’d been out of commission, and when I was visiting with him, he was again beginning to feel better, though he’d been bedridden so long that walking was a problem. He’d probably not return to be an usher captain – the position in which I knew him.
He and I didn’t need to talk about ‘opt out’ of mandatory medical insurance. We didn’t have to. He was living the reality that escapes others who think they can plan their illnesses.
As it happened, the last few days I’ve been surrounded by other random acts of disaster: Two days before the President arrived, my sister, properly crossing a street in New York City, was hit by a car which backed into her (it is an odd story). As I write, she’s awaiting surgery in a New York City hospital and in the long run should be okay.
Monday, a friend wrote about his wife, not yet 50, who ended up in emergency intensive care in a Rochester MN hospital due to kidney failure. She didn’t plan that.
And last night came a call from my Uncle that his 91 year old sister, my Aunt, had fallen in their apartment and had an emergency trip by ambulance to a rural North Dakota hospital. Luckily, she only cracked her collar bone. It could have been much worse.
So it goes when you’re in a position like the President of the United States (who I feel is doing an outstanding job under incredible obstacles).
Whether left or right, every opinion seems to be non-negotiable, and often completely opposite.
The House of Representatives (more on them in tomorrows post) is the only government entity that can provide funding to help increase employment, but will do nothing that can be perceived as a victory for the President.
People, including those who voted for him, seem to think their vote gave them the ability to order him around to their point of view.
It is “we, the people” who will make or break this country of ours.
I am not very optimistic that we have the vision and the ability to work together for positive change.
UPDATE August 21: A good friend commented on this yesterday. Comments and response included with his permission.
David Harris: Thanks for your continuing contributions, I enjoyed the recent blogs, even though I disagree that Obama is doing an outstanding job. I think it’s past time that he stopped compromising. I’m hoping he will have something of an epiphany on the fundamental nature of jobs and housing rather than attempting to boost the economy indirectly via programs that support banks and large corporations. I hope his actions are not based on concerns about being reelected. A lot of people pinned their hopes on him, and he is letting them down. In no way am I attempting to blame him for the incredibly obstructionist and short sighted actions of the Republicans, but I think he has been too focused on “top down” changes. Also, I’m very disappointed in his continued support of war as an instrument of policy.
Dick, in response: I doubt you and I will ever reach consensus on this, but here’s my position.
I think Obama has faced huge obstacles that few of us really appreciate. He needs to govern from the center, all the while beating off, in some fashion or other, the jackals that pass for the Republicans in Congress and Senate and State Houses. The politics is worse than I have ever experienced in my life, and I think he needs to be given a great deal of credit for accomplishing the great amount that he has.
https://thoughtstowardsabetterworld.org/wp-content/uploads/2022/04/thoughts-300x138-1.jpg 0 0 dickbernard https://thoughtstowardsabetterworld.org/wp-content/uploads/2022/04/thoughts-300x138-1.jpg dickbernard2011-08-17 11:25:362011-08-17 11:25:36#418 – Dick Bernard: Watching President Obama
0 replies