Since May 3, 1985, National Teacher Day in the United States has been observed on the first Tuesday in May. About 1944 an Arkansas teacher first had the idea of a National Teacher Day, and in 1953 the first such day was observed.
May 3, 1985, I was Minnesota Education Association field staff (some would say “teacher union rep”, which I was), on Minnesota’s Iron Range. Home base was Hibbing; my area was from Ely to Deer River and beyond. I don’t recall the specifics of that Teacher Day, except that it was a time of pride to be a public school teacher. I would work for teachers for the next 14 National Teachers Days. They were always good days….
While international events may have scuttled my (and other) submissions on the value of teachers this date, here’s what I sent to the Minneapolis Star Tribune on Sunday:
“Today [May 3) is National Teacher Day in the United States; and this week is Teacher Appreciation Week.
Take the time today or this week to thank a teacher, or two, or more.
First on my own list are my parents who were public school teachers for a total of 71 years between 1929 and 1971. I was a student in their public school classrooms from 8th grade through high school graduation. Thank you, Mom and Dad.
But my parents were only two among many teachers, remembered and not, who made a huge difference in my life, in small and large ways over many years.
To college Prof. George Kennedy, who finally had it with me when I was being lazy and not doing my best in my college Geography major, thank you for getting angry at me. I remember….
To Mr. H, who was, yes, somewhat odd, but was always there and did his best with we “scholars” in high school: thank you. He taught me a great deal about accepting differences, just by being different, himself.
The list could go on and on.
These are harsh days for our teachers.
Today, more than ever, thank them.”
As noted above, this May 3 is not a very kind and gentle time for America’s teachers (which includes school administrators), and particularly for their and other public unions. One hardly needs a PhD to see the success of a campaign to demonize a great profession and the unions which represent public workers. The architects of the movement to enshrine as symbols of “teaching” the always-anonymous persons called “bad” or “ineffective”, and their unions, have been successful, probably beyond their wildest dreams. This campaign to denigrate began years ago.
There are big long term dangers to labeling groups based on actions of the few, but in the short term negative labeling does work….
The amateur “experts” are legion: from the guy I’d never seen before, who recently and loudly declared that teaching was too lowly an occupation to need a license (he noticed the headline of an editorial I was reading); to a freshman legislator wringing her hands in a public meeting about the problem of “bad” teachers – a topic about which she quite obviously knew nothing, beyond the script she was holding while reading.
Then there’s a good and respected friend who spends much of his time in the company of ‘movers and shakers’ of this major city and has apparently come to think, sincerely, that things like unions, seniority, salary schedules, contracts and due process protections are destroying good education by protecting “bad” teachers who should be replaced by fresh young faces unblemished by union things.
I’ve about heard it all.
(The amateur experts take their cue, of course, from the ‘movers and shakers’ who by and large control information. As stated so well by Connecticut Superintendent Gary Chesley in an Education Week commentary accessible below, there is “a national search for a scapegoat…teachers and the tenure laws present a fertile target for bombast and demagoguery.”)
There are, of course, big gaps in the information provided, like the specific names and circumstances of these supposedly “bad” and “ineffective” people who supposedly represent teaching. Revealing the names is apparently a risk (and responsibility) no one wishes to take. But that’s not relevant. If you can make an anonymous and supposedly defective teacher the symbol of an entire profession, why not? Indeed, creating a caricature – a cartoon – is even better than a fact.
There are other conjured issues: a friend who trusts me asked about teacher pensions, pretty obviously resenting the fact that teachers even receive pensions. Luckily I had an informed answer (which I don’t think he liked): Pensions Public001
But, this is National Teacher Day: If one can get past the negative, there is a huge amount of good out there, not hard to find. I saw it Thursday night at my Kindergarten granddaughters spring music concert for family and friends (click on photo to enlarge). 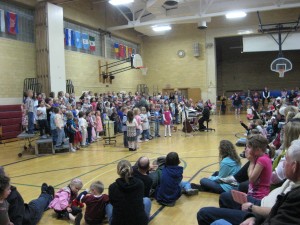 I saw it Sunday morning at Church when a wonderful A Cappella high school choir (directed by a teacher) from a northern Minnesota city performed for us after services.
There was an excellent column in Sunday’s New York Times.
There is infinite room for true dialogue IF people are at all interested. There are ideas out there just begging for conversation. But dialogue and ideas require openness to other points of view; the possibility of other conclusions.
But the overall official mantra I feel this National Teacher Day 2011 is distinctly vicious and negative.
It’s time for teachers and administrators to buck up and go to work where they live, delivering an alternative (and more honest) message about teachers and teaching and public schools. 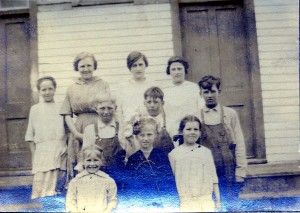 Mom, then Esther Busch and in first grade, front left, in 1915 at Henrietta School, rural Berlin ND. She and her sister Lucina, front row right, both became career public school teachers. Their teacher is Miss Gates. 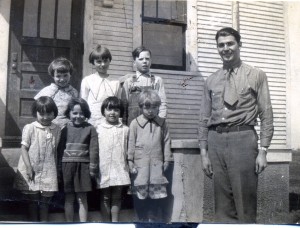 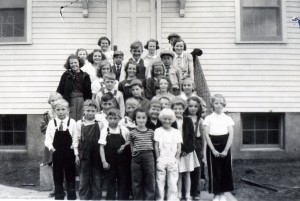