“Dropping in on Madison” was a no-brainer for me on Friday. I was enroute to Chicago, and the car would have steered itself towards the Capitol at the Hwy 151 exit. (Click on photos to enlarge them.) 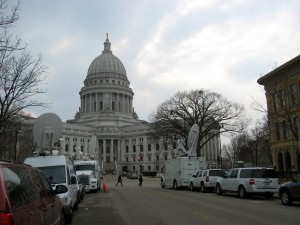 It was a gray afternoon, in the low 40s, when I parked near the Capitol about 1:30 p.m. Fifty miles down the road, into Illinois, the rain would begin.
All in all when I visited was a quiet time. A relative few protestors were on the sides of the building.
I had an open shot at some of the now-famous Ian’s Pizza, but passed on the opportunity…I’d just had lunch with Jermitt and Karen a few miles west at Portage (more on them in a following post).
I walked to the Capitol building past a large collection of news vehicles, ready to upload to the world news of happenings in Madison. Some nicely groomed guy, artificially front-lit, with the Capitol in the background, was preparing to do some report from the scene. Another reporter interviewed a solitary AFSCME worker. As I was leaving, some reporter and, probably his producer, were comparing notes on good places to eat in Madison. You can’t work all the time.
Such is how it is in the internet age of instant communications. The protesters know they need the media; the media knows they need protesters, the more unruly the better. Neither is much interested in “fair and balanced”. Somewhere out there is the audience, disconnected from the action by sometimes tens of thousands of miles, but with a front row seat nonetheless.
The next day, Michael Moore showed up at the Capitol while I was in Chicago, and without question he became a media event which I didn’t have the opportunity to see. Full disclosure: I’m a fan of Michael Moore, and he knows the rules of the contemporary communications game. I haven’t seen television since Friday, but I suspect the people in those mobile units, and behind the microphones and cameras got lots of audio and visual on Saturday, thanks to Michael Moore.
In my quite boring time by the Capitol, I became most captivated by a small gaggle of protestors. Their leader, with a bull horn, often supported by the group, was taunting the Governor who apparently was somewhere behind one of the windows in front of them. Everyone was very well behaved, though a bit raucous. Here’s my photo: 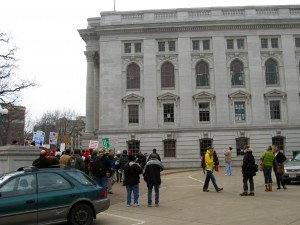 At one point a small roar came out of the assembled protesters. Apparently there was a sighting of someone inside a window of the Governors office. But that soon ended.
That scene defined as well as any the absurdity of such conflicts.
If by some wild chance the Governor had come out just to engage the group in civil conversation, the assembled group would have been dis-armed and probably not know what to do. Similarly, if that same Governor had said to the small group, “Come on up. Let’s talk,” there would have been a similar dilemma. Such is how it is in conflict mode.
When you’ve painted yourself into a corner, as the Governor and his legislature backers have, it is all but impossible to concede on any point, and a death struggle ensues.
Similarly, as the protesters are finding out already, the long haul on the line is very, very boring. Sooner or later you run out of speakers who can motivate; sooner or later the cameras and the people with the notepads and the microphones go on to the next crisis, and there you are, sitting by yourself on a damp, cold uninviting piece of pavement.
No question, I’m with the protestors in this crucial struggle to retain workers rights to organize and bargain. But the support comes with acknowledgment that being with them, even at a distance, requires some kind of formal commitment from me. Words like this are not enough.
Visit over, I headed for Chicago, and an unintended coffee at Wally’s Donuts the next morning…stay tuned.
https://thoughtstowardsabetterworld.org/wp-content/uploads/2022/04/thoughts-300x138-1.jpg 0 0 dickbernard https://thoughtstowardsabetterworld.org/wp-content/uploads/2022/04/thoughts-300x138-1.jpg dickbernard2011-03-06 16:11:522011-03-06 16:11:52#342 – Dick Bernard: Part 12. Dropping in on Madison