An unplanned trip took me out of town most of the last three days. I had planned to write this post about how money ends up in collective bargaining agreements; specifically about supposedly “free” money for Pensions given for Public Workers (a false charge).
I don’t have to write that commentary. David Cay Johnson of Tax.com has “hit the home run” on the issue. You can read it here. I hope you do. Last night after returning home Pat Kessler of WCCO-TV in Minneapolis also did a pretty good job in a minute or two to summarize out this issue as well. But is anyone listening?
In our contemporary society, we seem to prefer opinions over facts. Facts can be troublesome, so if the “wrong” facts surface, the volume of background noise is simply turned up, or the hearing aid is turned off…. In the process we’re killing ourselves as a society. We don’t want to hear the bad news; and the bad news is NOT public unions and collective bargaining agreements or deficits. We are being taught to hate the very entities, unions, which made American prosperity possible. If the contemporary version of the Republican party succeeds in its quest (likely) we will rue the day. There will remain unions, but these unions will have no teeth – they’re called “company unions” – and they’ll be blamed for being weak and ineffective. As I say, “we will rue the day”.
On return home last night I chose to take down from my bookshelf “A Man’s Reach”, the autobiography of my deceased friend Elmer L. Andersen. Elmer was the wealthiest man I personally ever knew. He was life-long Republican, served in the Minnesota Legislature from 1949-58, was Minnesota Governor 1961-63, and afterwards was a philanthropist and outstanding public citizen for the rest of his life. Public buildings are named after him. We learned of each other in 1992, and were good friends until he died in 2004. I have written of Elmer Andersen several times in these pages. 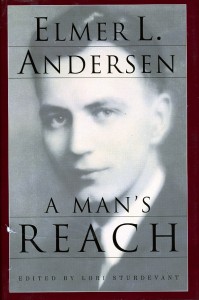 “A Man’s Reach” is still available in libraries and I would not diminish it by attempting a long review. It can and should be read.
The book talks about how politics was back in the day of Presidents Harry Truman and Dwight Eisenhower (contemporaries of Elmer L. Andersen).
Then as now politics was a competitive business, but there was recognition by most in all parties that a winner take all philosophy was not in anyone’s short or long term best interest. Andersen had no problems with unions – he worked with rather than against organized workers, including in his own companies. They were more partners than enemies, and everyone prospered.
I specifically took down the book last evening to see if I could find one particular passage to quote. For now I’ve failed, but I know it is in there, since I read it there some years ago.
Andersen was talking about how lawmakers went about making important decisions back then, and in essence said this: lawmakers in both partisan and non-partisan settings would first determine what good public policy was – what was needed by the citizens of the state. Then, and only then, they would determine how to pay for that policy through taxes or other fees.
Today the philosophy seems completely opposite: decide what we’ll pay, and that and only that drives the policy.
Andersen’s position in government came coincident with the the greatest surge of prosperity ever in our state and nation.
I think there was a “chicken-egg” relationship between that prosperity and the governing philosophy of Republicans and Democrats like Elmer L. Andersen.
We desperately need a rebirth…. 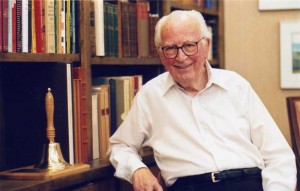 NOTE: What’s behind, and ahead. I began this series on February 17 with no idea that it would continue as it has. Quite by accident, it was preceded by another five-part series February 6-11 before I had any notion of troubles in Wisconsin. (Part 5 of that series remains incomplete. I’m still considering exactly what I want to say.) Part 7 of this series is doubtless not the last. This issue is far too important to forget about. Keep checking from time to time. Thank you.
https://thoughtstowardsabetterworld.org/wp-content/uploads/2022/04/thoughts-300x138-1.jpg 0 0 dickbernard https://thoughtstowardsabetterworld.org/wp-content/uploads/2022/04/thoughts-300x138-1.jpg dickbernard2011-02-26 05:02:292011-02-26 05:02:29#337 – Dick Bernard: Part 7. Misinformation and sloppy citizenship: An invitation to commit national suicide