Tuesday afternoon I went over to the Minnesota State Capitol to join the demonstration in support of public workers.
I’ve been to lots of demonstrations and gatherings in that rotunda. Never have I felt as much pride as I did yesterday. There was energy in that space as I have rarely felt. I didn’t hear a single word of a single speech. I don’t know who talked or what they talked about…there were too many people and the sound system was not up to the challenge.
What I could hear was roar of those within hearing distance; and what I could see was the sea of people of all ages, all exemplifying firmness and civility and solidarity. 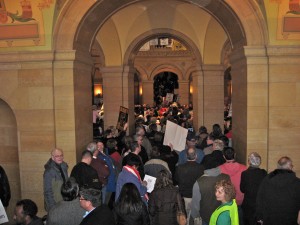 Close as I could get to the rotunda

On the stairs I struck up a conversation with an AFSCME member, and a member of the AFSCME union field staff who was along with her. I asked if I could take a photo for this blog. The staff member thought it most appropriate to take a photo of a member of the Union, and so Natalie, who works in Superior WI, did the honors. 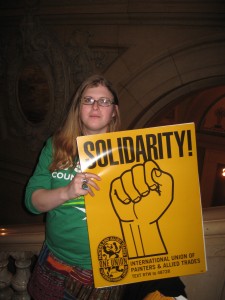 Out the front door of the Capitol, and heading towards my car and home, a member of the National Association of Letter Carriers caught my eye, giving witness to her union and its work for the citizens of this country. 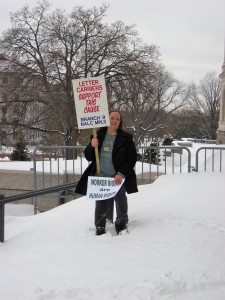 Back home Gov. Scott Walker of Wisconsin was given some air time on the 6:00 news for part of his “fireside chat” with Wisconsin residents – we live ten miles from Wisconsin so what is happening there is local news. Of course, he said he loved Wisconsin public workers, but the taxpayers can’t afford them, and on and on with the standard talking points. It struck me that he never once looked at the camera, rather at whatever served as his teleprompter to his left. His effort to make “public workers” as an alien class, something different than real “taxpayers”, was very obvious. Wisconsin will judge his performance. The local news analyst suggested that Walker had lost the momentum he began with. That is how these things can work. Take nothing for granted.
It’s been years since I’ve been in harness, working with public sector union issues as best I could.
Were I to give advice, I’d urge the leaders to let the followers take the lead, and to take the message back to their local communities. There is scarce a family that does not have one or more public workers within its constellation. They are the real people, not the union spokespeople. There is an immense amount of deliberate misinformation out there, about the reality of public employees compensation, the supposed burden of taxes, etc.
The intense focus has been on making the public employee the villain, with no talk about other solutions. There needs to be some truth telling. If there are disequities – too much or too little – these need to be pointed out and acknowledged. Basically untold is the story of the huge inequity in wealth in this country, and that the wealthy are doing very, very well – thank you – in these difficult times. They are to be insulated from this sacrifice.
Maybe there were 2,000 in that rotunda area yesterday. If each of those concentrated on ten people who supported their cause; and those ten found ten, and so on, there would be serious momentum very fast. But it takes effort to keep up momentum. Power has the means to wait out the Powerless. It will be work.
Minnesota legislators and others are waiting to play copycat if Walker succeeds in his gambit. They will be tempted otherwise if the momentum shifts.
Each of them, behind the bluff and bluster, is wondering about votes in the next election.
They need to be very worried.
They need to know that they can not step on a truly exceptional group of employees on which citizens of every state depends.
Solidarity forever!
https://thoughtstowardsabetterworld.org/wp-content/uploads/2022/04/thoughts-300x138-1.jpg 0 0 dickbernard https://thoughtstowardsabetterworld.org/wp-content/uploads/2022/04/thoughts-300x138-1.jpg dickbernard2011-02-23 05:08:102011-02-23 05:08:10#335 – Dick Bernard: Part 5. "Solidarity forever"