Baby Doc Duvalier materialized in Port-au-Prince about a week ago. You’d be led to think Duvalier’s trip was a surprise to the international community. Reading the media, it almost seems as if he just jumped on a plane and flew home after 25 years in France.
The odds of Duvalier’s trip to Haiti being unknown to the international community are about the same as my odds of winning the lottery.
His arrival has re-ignited the conversation about Haiti, particularly about the Duvalier and Aristide years.
The events brought back my own memories, recounted below. My key learning, then: take nothing at face value if the topic is Haiti or, in particular, former President Jean-Bertrand Aristide.
We set foot on U.S. soil after spending a week in Port-au-Prince on December 13, 2003. It had been a powerful week for me: my first visit. Basically we had met with persons and groups favorable to President Aristide, though we didn’t meet with him. We went by, but didn’t enter, the iconic Presidential Palace. Excepting the last day or two in Port-au-Prince, which were a little tense, there were no reasons to be concerned about safety. I felt welcome in Haiti.
In Miami, before the flight home, I picked up the Miami Herald for December 13 (below, click on photo to enlarge). It speaks for itself. The complete news article is here: Miami Herald 121303001) Less than three months later, Aristide would be gone. 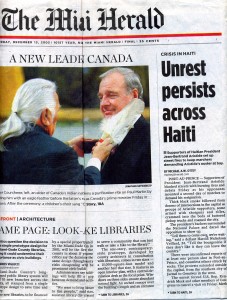 The trip caused me to want to learn more about the geopolitical relationship between the U.S. and Haiti, something I knew little about at the time. I’ve been studying this ever since, not only from the academic perspective, but from the grassroots as well.
Freshly home, in early January, 2004, I went to the U.S. State Department website and discovered the following news release on Haiti (Click on it to enlarge. There’s no need to look for it on-line – it disappeared from the State Departments website and cyberspace by the middle of 2004, if I recall correctly. 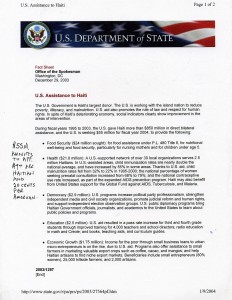 I wrote the Haiti desk at the State Department in mid-January, 2004, asking where the money identified for Haiti had been spent (relevant documents here 04001). Much to my surprise, in early February, I received a phone call from the State Department. I simply restated my desire to have information in writing. At this point, I was still very trusting of my government…I thought my question would be very easy to answer, since it was directly from an official document and very recent as well.
Succinctly, I never got a detailed answer to my question, even after a Freedom of Information Act request, and a passage of two and a half years. By the time I dropped my request, the matter had been turned over to U.S. AID and the Department of Defense. My last response from USAID seemed to indicate that the person knew more than she was authorized to tell me; Department of Defense never did provide specifics.
I received only incomplete and vague information from my Government about how it spent my tax money. I became enough of a nuisance so that I am probably a name on file in Washington.
Seven years after that first trip to Haiti I have had no choice but to conclude that even official U.S. government information cannot be trusted, regardless of the source; and that the likeliest reason for the non-disclosure in 2004 was that the so-called U.S. aid to Haiti was primarily being used to destabilize and ultimately overthrow the democratically elected government of Haiti on February 29, 2004. I found other evidence of blatant dishonesty in U.S. reporting of another important event in Haiti. There is the additional problem of deliberate dessemination of misinformation via supposedly credible sources who may not even know they are spreading untrue information.
The initial information about President Aristide’s motivation and intention to help his people, which I received on that first trip to Haiti, turned out to stand the test of time, and was credible, and endures even after constant attempts to destroy Aristide’s reputation.
Now information – and misinformation – is again swirling, occasioned by Duvalier’s return to Haiti; and the seeming continued efforts to smear Aristide and keep him out of his native land.
An excellent 16-page booklet, We Will Not Forget! The Achievements of Lavalas in Haiti by Laura Flynn and Lisa Roth was released in 2005, and reprinted in 2010, which endeavored to tell the largely untold story of what the Aristide administration was working for – and toward – in Haiti. Simply type the title in your search engine for more information. It is worth reading.
There are many chapters yet to be written about Haiti.
Keep seeing Haiti.
My personal perspectives on the Haiti I visited in 2003 and again in 2006 can be found here. While the site needs updating, I have continued to be very engaged on the geopolitics of Haiti and particularly the United States.
https://thoughtstowardsabetterworld.org/wp-content/uploads/2022/04/thoughts-300x138-1.jpg 0 0 dickbernard https://thoughtstowardsabetterworld.org/wp-content/uploads/2022/04/thoughts-300x138-1.jpg dickbernard2011-01-23 22:35:492011-01-23 22:35:49#317 – Dick Bernard: Some thoughts on Haiti, Duvalier, Aristide, reconstructing the deconstructing….

#316 – Bells for Haiti Committee: Final Report on the One Year Anniversary... #318 – Dick Bernard: The President's State of the Union Address…and...
Scroll to top