Today several of us will gather at the bridge which connects Loring Park and the Sculpture Garden in Minneapolis for the 3:53 p.m. CST ringing of the bells for Haiti.
Up to date details about Bells for Haiti are here.
Here is a song, sent via Ezili Danto of Haitian Lawyers Leadership Network a couple of days ago, which deserves a listen this day. Her note, included with the song: “Re-MEMBERing the over 300,000 gone one year ago in 33 seconds and those left behind to uncrumble the fallen.”
At our final meeting before the 35 second Bells for Haiti observance our committee observed a moment of silence – 35 seconds in duration – the approximate duration of the Haiti earthquake January 12, 2010.
Ours is a society that abhors ‘dead air’. 35 seconds is noticeable. But we could take in the silence in a comfortable meeting room. Very few of us can imagine the horror of living through the experience of a 35-second earthquake, much less living in the aftermath of those horrible 35 seconds.
In those few seconds one year ago today, perhaps one of every seven people in the affected area of Haiti instantly lost his or her life, or were trapped, maybe to be rescued, but possibly die later. Virtually everyone was rendered homeless, and most remain homeless still today. The symbols that bring pride to the heart of a citizen anywhere: places like the Presidential Palace, destroyed. So, too, the prisons, releasing into the streets innocent…and guilty. Destroyed, too, was ‘government’….
How would it be for me, for my town, state and nation, were we similarly affected? The collective psychological aftershock is beyond understanding, though I try.
Nothing is simple for Haiti now or in the future and I need to recognize that. This is a place one-eighth the size of my own state, with a greater population. (Click on the map to enlarge. Thanks to Paul Miller for the rendering.) 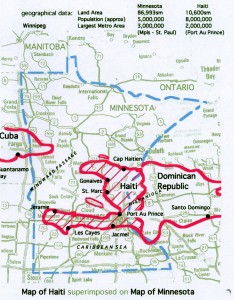 I can’t realistically or accurately describe “Minnesota” in some stereotypical way; neither can Haiti or Haitians be simply reduced to a generalization by myself or anyone.
From all the individual stories in Haiti I select a single one to recall.
Seven years ago, early December, 2003, I received an envelope a few days into my first trip to Haiti. The envelope included 20 simple but beautiful greeting cards produced by a group called Atelier des Artisans Reunis in the community of Varreux, somewhere in Port-au-Prince environs. Here’s a sample: 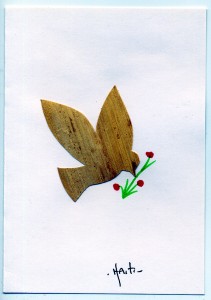 The envelope included an e-mail address and a website, which I had visited (which no longer exist.)
Within the last few days I asked Brian Concannon of IJDH, the person who connected me with the group in the first place, if he could reconnect me with this group.
He responded as follows (printed with permission):
“The Atelier rises and falls based on the challenges that Haiti keeps presenting. Since you bought those cards, two of the three leaders were executed and the workshop was destroyed because gangs thought they were MINUSTAH informants. Much of the reconstituted Atelier was then destroyed in the earthquake. People have been sick and died, everyone has run out of money.
But they keep persisting – we got an order a few months ago. We have been bringing down our own blank cards, with IJDH’s contact info printed on the back, and had them do the decoration. I am actually not sure exactly where they are, because Wisly, our contact, has been willing to do pickups and drop-offs for us. I do not believe they have anything online. I helped them get [a website] up years ago, but it fell apart.
I would suggest contacting Wisly Jean Louis, who is our main contact with the Atelier: wislyjeanlouisATyahooDOTfr, and see if you can work something out with him that fits your needs.”
Wisly’s e-address worked, but I’m language challenged, and our computers were not exactly compatible.
But perhaps a reader or two might want to find out more about this modest enterprise, of Haitians simply trying to earn an honest living. And maybe a little bit of good can be done.
Today is an awful anniversary. Perhaps somewhere in the seemingly insurmountable difficulties we can all do a little bit – or more – to help.
I hope to continue to seek to understand, and to help in whatever small ways I can.
Remember Haiti at least for those 35 seconds today.
https://thoughtstowardsabetterworld.org/wp-content/uploads/2022/04/thoughts-300x138-1.jpg 0 0 dickbernard https://thoughtstowardsabetterworld.org/wp-content/uploads/2022/04/thoughts-300x138-1.jpg dickbernard2011-01-12 06:23:432011-01-12 06:23:43#310 – Dick Bernard: Haiti, 35 seconds and a year later