Sunday one of my favorite Catholic Priests, Fr. Joe Gillespie, was recalling a 1994 visit to Mother Teresa’s Sisters of Charity in Calcutta.
At the time, he was a university professor in the United States, and he came by unannounced during a heavy monsoon rain. He knocked on the door and a Nun answered. “Would it be possible to see Mother Teresa”, Father Joe said. “Yes, she’s been expecting you.”
So, off the street he came, and face to face with Mother Teresa for a 35 minute conversation, puzzling all the while at the “she’s been expecting you” comment.
Visit nearing an end, she said to him, you should come here and work. “I can’t”, he said, “I’m under contract at the University”.
She understood, but as he departed, she said, “wherever you go, you must find your own Calcutta”. No more needed to be said.
This particular Sunday we had a visitor, a Priest from the Parish of Ste Catherine d’Alexandre de Bouzy, about 60 miles and four hours west of Port-au-Prince, Haiti, on the north side of the long peninsula. We had expected this visitor, Fr. Claude-Renel Elys’ee.
After Mass Fr. Elys’ee met with those of us who were interested, talking about the usual things one would expect when talking about Haiti: their infrastructure was damaged, not destroyed, needed to be replaced. What they need is actual money – they can get the materials and they have the people who can do the work. They need medicines and school supplies. It was good to have him there, as it was a chance to reconnect directly with Haiti which has, six months after the quake, essentially gone invisible to most of us. 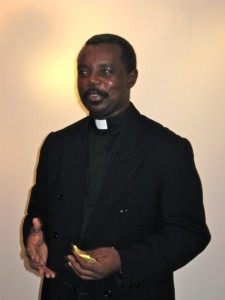