UPDATE: Sunday, January 17: It was reported today that Fr. Hagan, who was back in Port-au-Prince at the time of the earthquake, was injured. His office and guesthouse destroyed, and school damaged. Just one of endless fragments of information coming out of Port-au-Prince.
Saturday afternoon we went to early Mass at Basilica of St. Mary in Minneapolis. This is not our usual time. I had agreed to set up a table for my favorite Haiti cause, the micro-finance group Fonkoze, to go along with the guest speaker for the weekend, a Priest from Port-au-Prince, Fr. Tom Hagan, long-time of the group Hands Together.
Fr. Tom had apparently just arrived on the plane, not long before Mass. There seemed to have been no time to get acquainted with the visiting Priest, and some awkwardness at how or whether to introduce this guy from out of town. There had apparently been too little time to coordinate such – from the plane to the pulpit. Sitting in the pew, I wondered what was to come.
But all that that was a very small hurdle, and Fr. Tom gave his homily, one of the most unusual and most powerful I have ever heard from a mission representative. People don’t applaud sermons at our parish, even though we almost always have gifted homilists. This day, somebody in the back started to applaud, and everyone joined in.
The response was the same at all the remaining Masses, five more on Sunday. 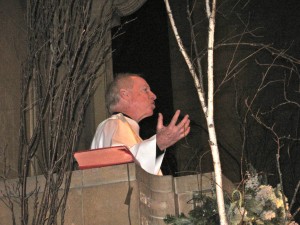 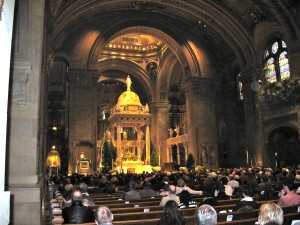 Monday, Fr. Tom flew back to Port au Prince, and was on the ground Monday afternoon and back in his long-time Cite Soleil mission. I heard that the second collection for Fr. Toms’ work set a record for the Basilica. He raised a lot of money in that day in Minneapolis. Since I had a table next to his, we had an opportunity to chat between Masses. He inspired, in an understated yet profound way, just by being who he was.
Then came Tuesday, about 24 hours later, the deadly quake in Port-au-Prince. It’s now Wednesday and we just got word that Fr. Tom is okay; his house has been destroyed. As for the rest of the population of Port-au-Prince, including his community of Cite Soleil, I know no more than anyone else. It is horrific. All that remains, over the coming months, will be the details of the carnage.
Fr. Tom gave a powerful message, which led to applause and to [over $30,000 that] weekend*. This gentle man from Philadelphia, my age, now 14 years in Haiti, got into our hearts.
His message? I keep struggling with how to summarize it other than it was very powerful, from the heart.
Basically, I guess, he “gave we Americans hell” for our self-absorption, and he did it in a way that stuck to the wall without offending too many. He acknowledged tough economic times; he didn’t ask us to contribute a thing; all he wanted us to do was to consider what it was we all take for granted, even in these times of recession, and the daily reality of the people that he served, who have nothing. He burrowed into our souls. He gave his homily with good humor and with understated passion.
So…without intending last weekend, I had something of a front row seat to the soon-to-unfold tragedy in Port-au-Prince. Fr. Tom came to Minneapolis to share Haiti with me.
Now I have to decide how best to respond. Lots of us are in the same position, I would guess. 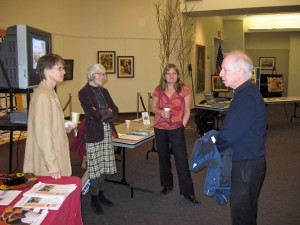