“BREAKING NEWS”: About noon came the report of the incident at the area of Houses of Parliament in London. It will dominate the news cycle. I notice that greater London has about 8.6 million population. Every single thing will focus on the incident at Parliament. Politics and News Media find things like what happened in London today very useful. It’s a good time to finish off the blog post I started earlier this week.

A week or so ago we joined “The City in the Sky“, taking a short vacation to Denver and a visit with family there. 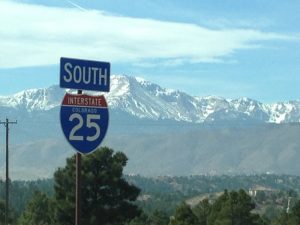 A plane contrail far above Pike’s Peak indicates that part of the “City in the Sky” is passing by enroute somewhere….This would have been March 10, 2017.

We’re not jet-setters. Taking an airplane once every couple of years might describe us fairly well. My history goes back to about 1962, from Denvers Stapleton Field to Bismarck ND, via Rapid City SD (The airliner had two propellers, very noisy. The connecting flight to Bismarck was full, so they flew two of us to Bismarck in a four-seater. It was a clear, dark night and the western Dakotas were not well lit.)

Being an infrequent flier, gives an opportunity to take occasional ‘snapshots’ of the “neighborhoods” in airplane world, and compare my reality with the normal assessment which comes via the news.

Wednesday, March 8, through Sunday, March 12, were very civilized days at and in the air between the Minneapolis and Denver airports. I say this even though we endured delayed flights on both ends of the trip (equipment problem, then weather).

This has been my normal experience over the years. Only once was there a legitimate drama in an airplane, and that was back in the 1970s, best I remember. This time it was a guy with a heavy metal suitcase which he refused to submit to inspection. Finally they let him be. I notice him the rest of the flight!

As “The City in The Sky” makes clear, the million or so people per day that fly in airplanes from here to there and everywhere, are a community of strangers.

We could do worse than the airport crowd. Come to think of it – and I get around a lot in my daily meanderings – the normal dynamic wherever I happen to be is much like it was on our short trip: people just being people.

On this trip, security (which really didn’t exist until post-9-11, though sky-hijacking increased security back in the 1970s) worked efficiently and quickly and without incident either way. Enroute out, a couple were detained very briefly, but not because of suspicion. The child was in a wheelchair, and the Grandma had an artificial hip, so security had to accommodate, and did so quickly and politely.

Did I mention? They appeared to be middle eastern, dressed in the conservative manner of many Moslems.

Perhaps somewhere in the terminals, something was coming down…no question…in a big town, things do happen.

But my point is simple: those around and with us in the airports were just ordinary people, “no drama”.

This afternoons news will be full of London, London, London…cut to a deadly car crash somewhere…cut to perhaps a shooting, or something else. And this is the normal news, delivered by people I like.

Meanwhile, in London, there will be the usual bad ending for the perpetrators; and one feels empathy for the victims and their families, but odds are very tiny that something bad will happen to the overwhelming vast majority of us.

And that’s the good news for the day.

Of course, bad news sells. So it goes….