The note announcing the death of Ruby Fitzgerald, age 95, began with a photo (below) and ended with a brief note “The tiny plaque pictured on the front of this card graced Ruby’s kitchen wall for most of her life.”
(click on picture to enlarge) 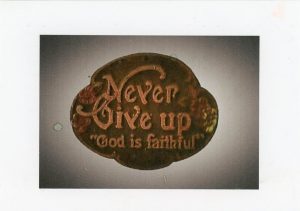 Saturday, I was fortunate to be in a room filled with people who all were privileged to know Ruby over the years. I think Ruby would have been very pleased. Here is the written story of Ruby Fitzgerald as presented by her family: Ruby Fitzgerald002.
My mother and Ruby were first cousins; actually double cousins: their respective Mom and Dads were brother and sister, and they grew up on adjoining farms in rural Berlin, North Dakota.
As happens, family life paths diverged, and because of geography, they only rarely saw each other, and we didn’t get to know Ruby.
Ruby and my Aunt Edithe, born two months apart, graduated from the same high school in the Berlin High School class of 1938. Their families and many others had weathered the very worst of the Great Depression together. Probably from that experience came the significance of Ruby’s plaque pictured in the death announcement.
Ruby was an honor student, and had a scholarship to Jamestown College, but there was no money to go to college. That is how the Great Depression was.
In 1993, for a Busch-Berning family history, Ruby wrote a very vivid descriptive story of her years on the North Dakota farm . You can read it here: Ruby Fitzgerald 1993001. Anyone of a certain age, who grew up in rural North Dakota, will quickly identify with her description of rural life.
I only saw the Fitzgeralds a few times, but the visits are remembered fondly. For some reason, way back, I drove the then-country Jamaca Avenue west of Stillwater to visit them at their small farm. Most likely, then, I was starting my search for the family history of the Busch and Berning families. Their’s was a warm, hospitable place.
By good fortune, in going through my Busch family pictures this summer, I came across a photo of Ruby and her twin sister Ruth taken about 1921. 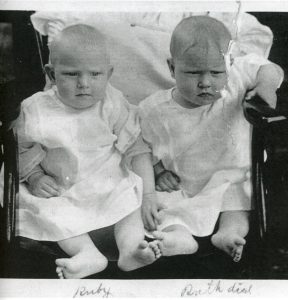 I took the photo to Ruby at the Ramsey County Nursing Home on Father’s day weekend, and she filled in the details of a fact I had known for years, without knowing the details. She was obviously moved by the photo.
She said that Ruth, her sister, had died at age 2 1/2 of whooping cough, most likely at the rural Cuba City WI farm home of her mother, Christina’s, parents, Wilhelm and Christina Busch. (After 13 years in North Dakota, the family went back home for the birth of the twins; thence they stayed in Wisconsin or Dubuque for another thirteen years before returning to the North Dakota farm, which they had rented out. The plant in which Ruth’s Dad worked had closed, and as I heard another family member say, at least on the farm they could have a garden, and eat. That is how it was.)
Three weeks after she saw the photo, Ruby died.
We all have our stories.
Ruby lives on through a wonderful family, and great memories.
I’m honored I could be present on Saturday. Ruby is at peace, and our world is the better for her having been with us. 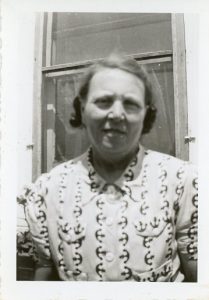 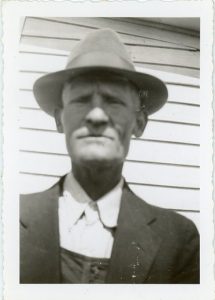 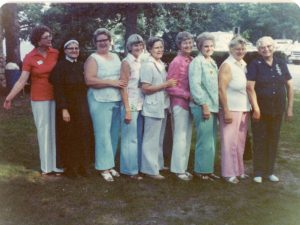 The Berning girls 1977. (There were two boys, August and Melvin, plus two young children, a boy and girl, who died very young.)