The Facebook album with 120 photos I took at and around the time of the Republican National Convention (RNC) in St. Paul in 2008, Aug 30 – Sep 4, are accessible here. If you access through this page, I believe you do not need a Facebook account to view these photos.
The program for the Peace Island Conference Sep 2-3, 2008, also in St. Paul, can be read here: Peace Island Sep 2-3 08001
(click to enlarge) 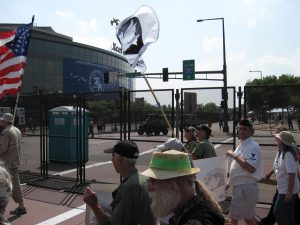 The coming Republican National Convention in Cleveland (more at the end of this post) reminds me of my own close call with the RNC gathering in St. Paul, Sep 1-4, 2008.
That was the year of Sarah Palin; the time of public recognition that Iraq War was a disaster for us and everyone; of the no-show of President George W. Bush at the Republican Convention; of the death’s door economy which was about to hit rock bottom less than two weeks after the Convention; of candidate John McCain’s admonishment of a near distraught Lakeville resident railing about Muslims….
It was eight years ago, and it almost seems quaint, even though it was the year the police state came to the Twin Cities; police prepared for riots, al Qaeda, and peaceniks descending on St. Paul…. Yes, it was quaint.
*
We learned that St. Paul would be the venue for the 2008 Republican Convention in the fall of 2006. At the time, I was President of a group called the Minnesota Alliance of Peacemakers (MAP).
I think it was in November, 2006, that I was at a conference at which the keynote speaker was Rabbi Michael Lerner of Network of Spiritual Progressives. At a break I saw my friend, Dennis Dillon, and a lady who I came to know, Susu Jeffrey, huddling about Susu’s idea: let’s have a Peace Island event at the time of the RNC, to highlight Peace, over the war which was then raging in Iraq and doing very serious damage to our country in so many ways.
Susu’s was a wonderful idea. I joined the committee, and for the next 20 months or so, a group of about eight of us met almost weekly to plan what became a major conference, which we called, “Peace Island: A Solutions Driven Conference”. We emphasized solutions.
Near the end of my last year as MAP President, October, 2007, I believe, I was invited to be part of a panel, along with two members of law enforcement, to talk about the policing matter at the Convention.
For MAP’s annual meeting in December, we invited the Chief of the St. Paul Police Department, Bill Harrington, to speak at our meeting.
At the meeting, several – “our own” – picketed; I invited one of them to speak before Chief Harrington was introduced; two uniformed members of the Minneapolis Police Department were at the back of the room. Nobody knew why they came….
The meeting went very well.
Chief Harrington gave a very good presentation, and was well received.
*
Planning for the Peace Island conference continued for the next year. MAP became the primary sponsor.
There were other groups with their own agendas forming outside of our own, some including some MAP members. We were later to learn about infiltrators (“intelligence”) for the police in some sectors.
I’d be disappointed if there was not a dossier about me rattling around in some data base somewhere.
Just before the RNC week, I was asked if we would host overnight a small group of peace activists who were walking here from Chicago. We accepted this positive task for Kathy Kelly and group.
The next week my particular gig was exclusively the Peace Island Conference which, by the time it convened. had perhaps 250 registrants, and about as strong a faculty as had ever been gathered together for such a conference.
Preceding our conference was a separate peace demonstration from the State Capitol area to the RNC. I was one of the participants. It was one of the most peaceful (read: non-eventful) marches I’ve ever experienced. We gave positive witness to peace.
Those Transformer-appearing police in the riot gear didn’t even have interesting duty. Off and on you’d hear about some incident or other, but apparently even the anarchists were subdued.
The next two days our own Peace Island conference got no news coverage that I know of. Even those I would consider allies didn’t cover us. They were out looking for the action somewhere else. We offered peace and an excellent program, that was it! Violence sells, and we just didn’t have it. From a news perspective, peace is boring; conflict or disaster is in. It is easier, on all sides, to emphasize problems, rather than deal with the messiness of real solutions….
*
The last day of the RNC week was a separate Peace Island Picnic on Harriet Island, across the Mississippi from the RNC. I attended the entire event.
It was a chilly, but festive afternoon. Excellent music. The attendance was dampened a bit by the temperature.
Even there, though, the police were vigilant, those peace people were not to be trusted. A parade of un-marked cars made a point of driving by, as if to say “don’t mess with us”. On the river was what I call a “gunboat” “protecting” St. Paul from the rabble on “peace island”. Were we going to swim across? I didn’t see any canoes….
Elsewhere the news media found the occasional trouble they were looking for, but never very much, and nowhere near where I was. Sometimes I wondered if there were the famed agent provocateurs planted to throw a brick or two, but, of course, they don’t publicly announce such things.
Inside the Xcel the delegates anointed John McCain and Sarah Palin, and the rest is history…. 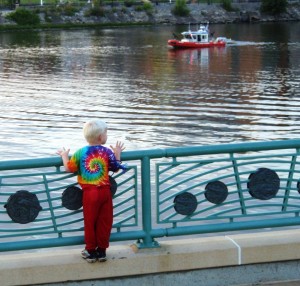 A peace kid and a gunboat at the Mississippi River, St. Paul, September 4, 2008 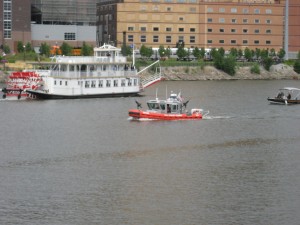 Closer view of the gunboat on the Mississippi Sep. 4, 2008

NOW, CLEVELAND:
It is hard to predict what will actually happen in Cleveland at the RNC next week. There has been immense and measureable and positive change in this country in the last eight years. We came back from the brink of catastrophe in 2008, no thanks to Republican congressional initiatives to block and delay.
Most likely the RNC will anoint Trump/Pence, though Donald Trump has only a single interest in the matter: himself. And Pence represents a fringe of his own party.
The Republican establishment largely despises Trump, but thinks he’d be useful as President…at least more useful than President Hillary Clinton. If Trump tires of the job or otherwise leaves, the new President Pence will also be useful.
There will be nothing about “we, the people” at the Convention, except for the small minority who are continuing to seek to take control of the government for their own ends.
I’ll be like everyone else, and just wait and see.
I do have some advice for the Peace and Justice Movement: now is a great time to be on the Court for positive change, but there needs to be very serious discussion of how better to impact in these days.
https://thoughtstowardsabetterworld.org/wp-content/uploads/2022/04/thoughts-300x138-1.jpg 0 0 dickbernard https://thoughtstowardsabetterworld.org/wp-content/uploads/2022/04/thoughts-300x138-1.jpg dickbernard2016-07-16 20:27:252016-07-16 20:27:25#1146 – Dick Bernard: The 2008 Republican National Convention. Remembering Peace Island and other things.
0 replies