Tomorrow is May 1. May Day.
Since I was a little kid back in the North Dakota of the early 1940s, I learned there was something special about May 1.
Probably the first actual memory was of May Baskets, which had some significance, though I do not remember exactly why. And there were Maypoles.
(click to enlarge, double click for more detail) 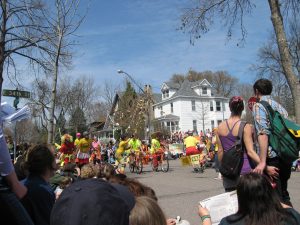 A traveling May Pole in Heart of the Beast Parade, Minneapolis, May 5, 2013

As a lifelong Catholic I remember, for some reason, “Mary, Queen of the May”. And later, when the television age and the Cold War interfaced for me (that was 1956 when we got TV; we almost never were in real movie theaters with news reels) sometimes there would be a short film clip of those awful Communists parading their weapons of war in Red Square in Moscow on May 1…May Day.
May 1 has had a long history. Search the words “May Day”, and here is what you get.
The Wikipedia entry for May Day is most interesting.
May Day has come to be a multi-purpose day, fixed on a particular date (rather than day), and this year, since it falls on a Sunday, it is simpler to celebrate in our U.S. weekend calendar, especially if the weather is nice.
Tomorrow will be the annual May Day “Heart of the Beast” Parade in south Minneapolis, and this year it actually can be on May 1, rather than some other nearby date. Occasionally I’ve marched in that parade as part of a unit; occasionally, I’ve watched it as a spectator. It is a fun day with a 42 year history. 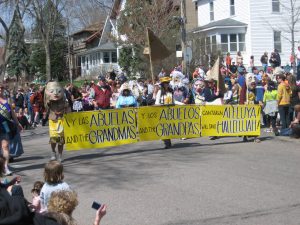 Heart of the Beast May Day Parade May 5, 2013, Minneapolis MN

Tomorrow, however, Sunday, May 1, 2015, I’ll be heavily involved in two events honoring my friend, Lynn Elling, who died at 94 on February 14. One is a celebration of his life at 3 p.m. at First Universalist Church in Minneapolis (34th and Dupont), and the second, the 4th Annual Lynn and Donna Elling Symposium on World Peace through Law – “World Law Day”, this years event spotlighting solutions to mitigate climate change, presented by J. Drake Hamilton of Fresh Energy.
The date of both events is intentional. May 1 was very significant to Lynn Elling.
He and others invented World Law Day.
“World Law Day” is yet another creative use of May 1.
The first World Law Day celebration was May 1, 1964, in Minneapolis, ten years before the Heart of the Beast Theater marshaled its first May Day parade. The co-founder of the event was Lynn Elling. As described in the brochure for this years World Law Day:
“World Law Day was a creation of Lynn Elling, Martha Platt, Dr. Asher White and others. The first event was May 1, 1964. World Law Day was an adaptation of Law Day, proclaimed by President Eisenhower in 1958, and enacted into U.S. Law in 1961. Law Day was the U.S. “cold war” response to the martial tradition of May 1, May Day, in the Soviet bloc.
The premise was peace through World Law, rather than constant war or threat of war.
Large annual dinners on World Law Day went on for many years in Minnesota and perhaps other places. At some point for one or another unremembered reason, the tradition ended, but Lynn never forgot.
In 2012, after the death of Donna, Lynn asked that World Law Day dinner be reinstated May 1, 2013 at Gandhi Mahal, he and Donna’s favorite restaurant.
At the time he was planning a major trip to Vietnam with his son, Tod, who had been adopted from Vietnam orphanage in the 1970s. Tod and Lynn arrived home only a couple of days before the 2013 event.
2016 is the 4th annual World Law Day, and the 52nd anniversary of the first World Law Day in 1964.”
As Lynn’s long and noteworthy life wound down, he was ever more fond of the mantra that today “is an open moment in history” for the world to get its act together for peace and for justice. His is a noble dream. We can help.
More about Lynn Elling, including his own memories on a 2014 video, here (click on “read more” right below his name.) 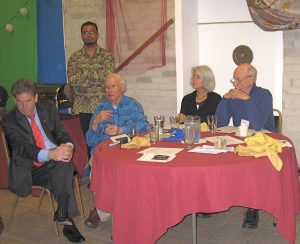 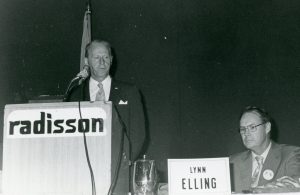