Today the eyes of the nation (at least a few of them, anyway) are on places like Pennsylvania, running their horse races for President in the runup to the party conventions to come.
My preference is to focus on the more familiar and far less visible: in my case, the local Senate District 53 DFL (Democrat) Convention I attended last Saturday. Previously I wrote about the Precinct Caucuses leading to that convention. You can read that here.
(click to enlarge) 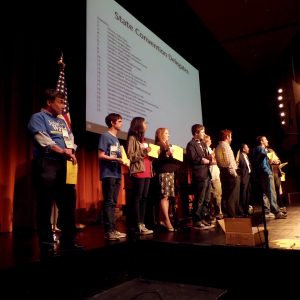 Back on March 1, at the Precinct Caucus, those who attended their Caucus had an opportunity to “run” for delegate to the Senate District Caucus. I use the word “run” in quotes, since in most all cases, anyone who wished to stand for election was elected…and our caucuses were more heavily attended than even in 2008, which was a record year.
Part of the “culling” process is very simple: if you run for delegate to the Senate District, you are de facto committing yourself to a full day meeting, which in our case was at one of the local high schools, East Ridge, on April 23.
East Ridge is an attractive venue, but who wants to commit to an entire Saturday being, as our chair playfully reminded us, “party hacks”, simply by virtue of our willingness to participate. (It is pretty easy to become a “party hack”, though lacking in rewards!)
After the earlier Precinct Caucus, and before the Convention, I volunteered for the Resolutions Committee where a dozen of we ordinary citizens met for a couple of hours to sort through a bunch of resolutions proposed at the caucus. These were condensed into a very nicely prepared report bringing forth perhaps 58 proposed resolutions.
A guess – only a guess: fewer than 400 delegates actually registered on April 23, and perhaps three fourths of these stuck around for the entire day, which was near eight hours. Much of the extra time came from the “B” side of our district, where there were three candidates vying for endorsement for one legislative position. This wasn’t my “side”, so I was among the group that had to occupy ourselves while the other group debated and went to a second ballot to choose their candidate.
I had one assignment this Convention day: leading the Pledge of Allegiance as the colors were advanced at the time the Convention began.
I’m as patriotic as anyone, and have said the Pledge hundreds of times, but this time I wrote it down, just in case. I printed the first version I saw on the internet (emphasized letters as they were on the internet version):

Before saying the Pledge, I decided to ask my fellow participants to consider dedicating the convention to someone in their life who in some way contributed to their motivation to participate in politics to this extent.
For me, to myself, I picked my two grandfathers: one, Grandpa Bernard, a veteran of the Spanish-American War who was 63 when the Social Security act passed in August 1935; the other, a farmer, Grandpa Busch, who likely was one of founders, and certainly one of the very earliest organizers for the North Dakota Farmers Union in 1928.
The main event, at the end, was to select Delegates to the next levels, the 4th Congressional and State Conventions.
We were entitled to 18 delegates and the decision was to go to the “walking subcaucus” method, where individuals agree to convene special interests. In this case, the descriptor had to begin with either “Clinton”, “Sanders” or “Uncommitted”, with one or two words more. In the end, there were 23 proposed sub-caucuses (see photo above).
In my experience, this process always works very well.
In our districts case, in the end seven delegates were Sanders, eight delegates were Clinton, and three were Uncommitted. (I was with the Clinton bunch, and wasn’t interested in going forward. Our group of over twenty people elected three to represent us.)
There were, there are, some tensions. But that is how gatherings like this work. This is society at work.
I’m happy to have been involved.
Thanks to my fellow citizens who did the organizing and the participating in this most important part of the democratic process.
from Kay: Dick, I really liked your preface to the Pledge. I thought about my mom, whose political activism & involvement in League of Women Voters was an early inspiration for me!
from Annelee: Thanks for sharing “Another election day”. Glad we have people like you patriotic and caring.
https://thoughtstowardsabetterworld.org/wp-content/uploads/2022/04/thoughts-300x138-1.jpg 0 0 dickbernard https://thoughtstowardsabetterworld.org/wp-content/uploads/2022/04/thoughts-300x138-1.jpg dickbernard2016-04-26 13:06:512016-04-26 13:06:51#1126 – Dick Bernard: Attending a Political Convention. Does this make me, or us, "Party Hacks"!?
0 replies