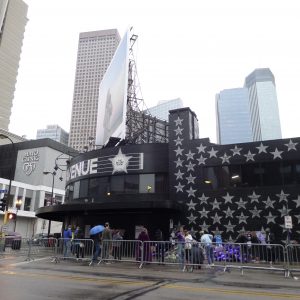 POSTNOTE: April 24, 8 a.m.: This morning a feed from the Washington Post brought this link, of ZZ Topp’s Billy Gibbons on Prince. I found it fascinating, with links to Prince playing.
Yesterday [April 21] I was in the hallway at an elementary school, and a teacher in the student lunchroom held up his cell phone, pointed our way, and said “Prince died”. My daughter, who was with me at the time, looked at her own cell phone and said that the musician, Prince, had just died.
It was one of those moments one doesn’t soon forget. We all have had them.
Prince’s wasn’t my music, but his was an impressive presence in this, his lifelong home state. This mornings Minneapolis Star Tribune devoted the entire front page, and five additional full pages to his “Purple Majesty”. If there is any major league Prince fan out there, make an offer for the front section (even if the offer is only, “I’d like to have it….”)
My only real memory of Prince is seeing Purple Rain in a Duluth movie theatre in 1984, the year it came out. I remember that I liked it.
Prince apparently was 25 when he made the film. It is probably destined to be a blockbuster this time around. Twin Cities area screenings can be viewed here.
On occasion, I’d be in the neighborhood of First Avenue, the club made famous by Prince, which in my day was a somewhat shabby nondescript building across the street from the Greyhound Bus Depot in downtown Minneapolis. Now it’s an iconic place, and the tourist traffic will increase, for sure.
That’s all I really know about Prince.
Other news outlets can fill in the blanks about Prince, who without doubt was a genius with music. I won’t even try. But he seems to have made his mark in the world of music. And he seems to have been a decent guy to boot. Not bad for a life, even if only 57 when it ended.
Then there’s Harriet Tubman.
The front page of yesterday’s Star Tribune headlined “Tubman to make history again in U.S. currency first.”
Ms Tubman was quite a woman who, thankfully, really never did know her “place” back in the day, and lived to tell about it.
I saw a post about Harriet Tubman yesterday which is perhaps a bit off the beaten path for most folks, which I found most interesting. You can read it here. The headline says it well: “Top Seven Ways Harriet Tubman Is The Most Badass Spy Warrior Ever To Be On U.S. Currency….
Who’d ever thought it possible?
All of us owe a great debt to people like Harriet Tubman who took a stand for justice at great personal risk.
COMMENTS:
from Jeff: On behalf of our daughter, Emily, we went to Paisley Park yesterday. She wasn’t a big fan, but
I think wanted to be part of the larger group honoring him (I would not have gone myself )
I liked Prince’s music. He really was a genius and a musical prodigy. At one time I thought he was full of affectation, that it was a bit of narcissistic celebrity worship that surrounded him and his persona (or various personas).
But in listening to “Purple Rain”… it’s a rock ballad, that blends the soul of R+B with the electric rock and roll of the 1970’s. Much like he was a child of the 70’s and his father a jazz musician and his mother a vocalist in her spare time.
At Paisley park you see Caucasians and African-Americans mingling in respect. His music and his personality actually transcended race, and at this moment in America, we need more of that.
from John (my brother): Interesting personal connection factoid about Prince – a couple of decades ago, he appeared on one of the early MTV Music Video Awards TV shows. Believe it or not, one of his back up dancers at that point was your niece and, our daughter Christi.
Alas, she used up her 15 minutes of fame in about a 10 second segment – which, due to the technological limitations of the time, we recorded on VHS tape, played several times, and then somehow lost it in the dustbin of history.
https://thoughtstowardsabetterworld.org/wp-content/uploads/2022/04/thoughts-300x138-1.jpg 0 0 dickbernard https://thoughtstowardsabetterworld.org/wp-content/uploads/2022/04/thoughts-300x138-1.jpg dickbernard2016-04-22 15:29:532016-04-22 15:29:53#1124 – Dick Bernard: Prince, and Harriet Tubman, Deserving Their Honors.
0 replies