As I write, the polls remain open for several more hours in New York state’s Primary election, with endless analyses of what it all might mean….
A few hours ago I had occasion to be in downtown Minneapolis to deliver something to the Canadian Consulate at 7th Street and 4th Ave S, across the street from the Hennepin County Government Center.
A block from my destination this billboard was impossible to miss:
(click to enlarge) 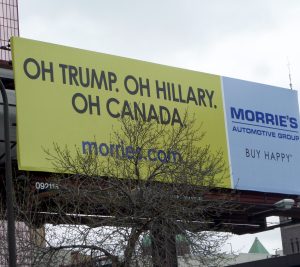 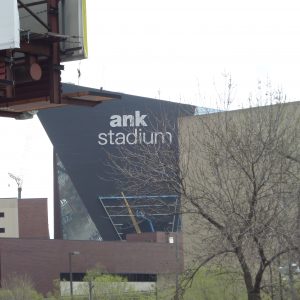 Of course, locals will recognize this place, missing part of the name, a bank with lots and lots of money.
For the moment, I’ll allow that bank, owner of the name of the new football stadium, to go unrecognized. Everything is a billboard for hire these days, and as bank robber Willy Sutton liked to say, “that’s where the money is”.
But I digress. Politics is serious business.
Yesterday in New York will be spun as it will be spun by the parties and the surrounding chattering class.
I am guessing there are lots of earnest conversations going on within the power actors ‘as we speak’ about what New York means.
I’ll give my opinion as much credence as anyone else.
My take:
The Republican Party as very broadly defined has been hard at work for many years to essentially make Democrats like myself irrelevant, hoping to take control of the three branches of government and governorships and state legislatures.
It has been remarkably effective.
But Tuesday sort of signifies a wakeup call for the bunch going to Cleveland in July.
A carefully nurtured base wants Donald Trump as the Republican candidate for President; Republican insiders are in a quandary, they despise Trump. Contender Ted Cruz came in third, so much for his invincibility. Ted Cruz is also despised by the Republican power-structure, or so we hear. He’s second choice of the Republican electors.
Kasich seems to be going nowhere fast. Paul Ryan, I still think, will be the “fair-haired boy”, the “Knight in Shining Armor” before this is all over.
As for Hillary, for years, the same Republican apparatus has been actively working to destroy Hillary Clinton by any means at their disposal. Secretary Clinton fixes this at the last 25 years, which would ring true, as her husband became President in 1991, and she became an activist First Lady, and she was despised. Remember her efforts at Health Care Reform back in the early days of the Bill Clinton administration? Remember how that went over? Remember the “Harry and Louise” ads financed by the Health Insurance Industry?
And then she earned positions of Senator from New York, and Secretary of State, which required her to make endless tough decisions. That contributed to the opportunity for effective hate messages. She couldn’t do everything everybody wanted. As an elected representative you represent a broad constituency with many needs and beliefs. She represented a state, then a country….
Give anyone of us 25 years of hate-messages from someone and consider the effects that it would have (go to snopes.com sometime and put hillary clinton in the search box…. No matter how decent we could be shown to be, people tend to gravitate towards the down and dirty, nasty, narratives especially about other people.
Hate speech works.
Long ago George Orwell in 1984 hi-lited what he called the “the two minute hate” (or something like that), which kept the Proles energized against an invisible enemy.
Hate messages are nothing new….
Keep that in mind, as you assess the real Hillary Clinton (as opposed to the one manufactured by her opposition).
April 21: This mornings Just Above Sunset (April 20) does another good job of capsulizing the events in New York on Tuesday.
What it all means depends on who does the interpreting. As Fox News liked to say, “we report, you decide”.
https://thoughtstowardsabetterworld.org/wp-content/uploads/2022/04/thoughts-300x138-1.jpg 0 0 dickbernard https://thoughtstowardsabetterworld.org/wp-content/uploads/2022/04/thoughts-300x138-1.jpg dickbernard2016-04-19 16:50:132016-04-19 16:50:13#1123 – Dick Bernard: A Culture of Sanctioned Disrespect
0 replies