Today it is one year since my Uncle Vincent Busch died in LaMoure ND. He was 90, and my last survivor of the generation preceding mine.
This past twelve months has been filled with reminiscing about various aspects of the family of 11 people who made the North Dakota farm a home for 110 years.
Today, Vince’s great grandnephew Ted Flatley, my grandson, gives me the opportunity to remember a part of the heritage of the Busch family: an affinity for music.
Ted, a 10th grader, loves music and has the unusual gift of perfect pitch. Here’s how he described it in his 10th grade personal project at South St. Paul High School on January 29: 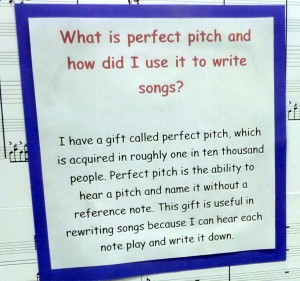 I saw Ted demonstrate his project a few months ago at a school concert. The Band Director, Mr. Peterson, asked a random someone in the audience to hum a note, then asked Ted to identify the note. Ted said “F”, or such, then went back to his Vibraphone, played “F”, and sure enough: perfect.
At last weeks project display I asked Ted to explain what perfect pitch is, and he did. “See the frame around the words”, Ted said. “People can see that the frame is a certain color. I hear musical notes the same way.”
Made sense to me.
Ted continues to cultivate his gift by singing (along with his sister, Kelly) in a metropolitan area choir, plays an excellent marimba, and composing his own music, one of which he debuted with his schools jazz band last Thanksgiving at a community dinner. You can listen to his composition here.
*
It wouldn’t surprise me if Ted’s (and others in the Busch families) musical gifts come from the Busch branch of the family tree.
Ted’s the first “perfect pitch” I know of, but Grandpa Busch was an excellent school-trained “farmhouse fiddler”, and one of his Uncles was a church organist, and one branch of the family had a band in Wisconsin. Grandma was in the church choir, Grandpa had his own band for country dances. Singing was a staple in the country farmhouse of my grandparents.
(click photos to enlarge) 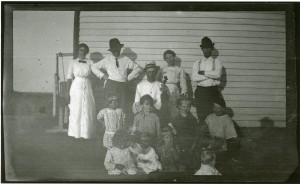 Grandpa Busch with his fiddle, and family, ca 1915

Twice, the summer before Uncle Vincent died, I heard him sing Amazing Grace at church, and his was an amazing voice for an 89 year old. I think he saw the future, and Amazing Grace was his personal acknowledgement that his time on earth was soon to end.
Vince’s particular music preference was Dixieland. Ted’s is Jazz. Saturday night Ted took me to Orchestra Hall to see the Julian Bliss Septet, an outstanding interpreter of clarinet virtuoso Benny Goodman.
Back in 2014, when we were about to begin renovating the Busch farm house – Vince was then in the Nursing Home – I discovered in the house an old bedraggled case in which I found an old clarinet. Vincent had mentioned at some point that he had an opportunity to learn the clarinet about 1937, so it wasn’t a surprise to find the instrument, bedraggled as it was. (In the tiny school he attended, occasionally a teacher would be hired who knew something about music, and apparently about 1937 Berlin ND had such a teacher, and Vince at least had the opportunity to learn the basics.)
Along the way, Vince’s niece Georgine ended up with the remains of the clarinet, and took it to an instrument repairman in Hilo, Hawaii, who fixed it. (Georgine is the smiling youngster beside the drum in the below photo taken at the Busch farmhouse about 1953.)
At the end of 2015, at Georgine and Robert’s house above Kailua-Kona, Georgine took out the old clarinet and toodled a few notes on it.
I challenged her to use the next year to get the scales down. I’m pretty sure she’ll do it.
*
Uncle Vincent and his generation have now passed on.
With kids like Ted and the other young band members, we need not worry about the future. His parents generation, like Georgine, help too.
“Take it, Theodore”!* And Georgine, too! 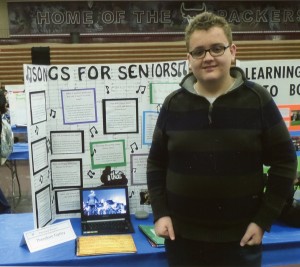 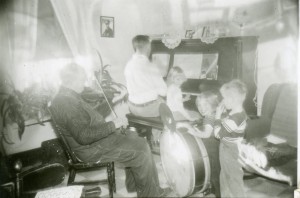 Ferd Busch and the George Busch family ca 1953 at the farm.