My summary: We demand leadership from the top (someone else); and thoughtful leaders who value consensus building amidst differences are crucial.
But we really need to expect leadership from ourselves. As Margaret Mead famously said: “Never doubt that a small group of thoughtful, committed citizens can change the world, indeed it is the only thing that ever has.”
Each of us have our own “small group of thoughtful, committed citizens.” And we can “change the world”, for better, worse, or not at all.
(click all photos to enlarge them) 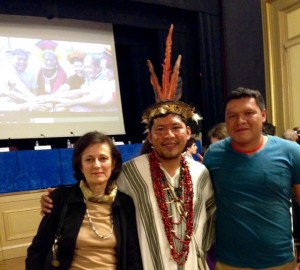 Overnite Saturday came an e-mail from my friend, Christine Loys, who has been a volunteer interpreter at the Paris Climate talks (photo above). She had written to J. Drake Hamilton, of Fresh Energy, who has been in Paris for all of the talks.
The two women had met by e-mail because of their respective roles at the talks. “I am so relieved that an agreement was reached” Christine said. “When I say “all is done”, I mean the negotiations because we all know that it is only a new area starting after that agreement!!!”
An e-mail immediately prior to the above came from friend Maria, in New Jersey, very simple: “!!!!!!“.
Maria included a link to a network she belongs to, accessible here.
What impressed me the most about these talks was that every single world nation – over 190 – has now mutually endorsed the same essential piece of a proposed climate change solution.
There were no dissenters.
None.
The negotiations in Paris accomplished something most groups have trouble doing, even within the tiniest “birds of a feather” groups. Negotiations, by definition, require compromise and good faith; individual demands subordinate to group consensus, however imperfect. “What can we agree on?”
Even more important, concluded negotiations are commitments to action. They connote relationships.
Of course, those opposed, and those in favor, of the result of this negotiations are already saying “too much”, “too little”…. This is always a given after any negotiations. Still, though, every world nation has signed on. The trick is to continue working towards common ground, rather than getting stuck in one or another absolute demand. I think a critical mass now exists to accomplish important things for the world’s future.
In my mind at this significant time is a quote shared by my friend, Jim Nelson, a climate activist, one of whose early mentors was business executive and UN advocate York Langton. “I always remember York Langton’s compelling United Nations invocation: “When the People lead, Leaders will follow.” Jim and his associates chose to pass on going to Paris, figuring they could do their best work at home. (Photo at end of this post.)
The way to success is to build on this success in Paris (which, lest we forget, was thought to be threatened with cancellation due to the events of Nov. 13 in Paris) is indeed back here at home, citizen by citizen, action by action.
March on. Build. We are the solution.
Rather than carping about what isn’t, best for advocates to celebrate what is, and to build upon this huge success.
J. Drake Hamilton will soon be back in Minnesota, back to work. On Thursday evening January 21, 2016, she will speak at Plymouth Congregational Church in Minneapolis for Citizens for Global Solutions MN “Third Thursday”, (Jackman Room, 6:45 p.m.) Put this on your calendar. You’ll be glad you did.

There are many credible advocates dealing with the issue of Climate Change. Find one and get actively involved. 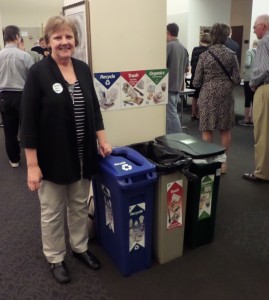 Donna Krisch, Basilica of St. Mary, Minneapolis, has volunteered to lead a group dedicated to protection of the environment; in this case, implementing a recycling program for their very large church. Photo, May, 2015.

Donna, above, is one of millions of critical links for progress on any initiative. She’s a local leader, dealing with the disappointments and frustrations that often accompany local initiatives. She represents us all, a heroic example working for the small changes that are required to make big adaptations. 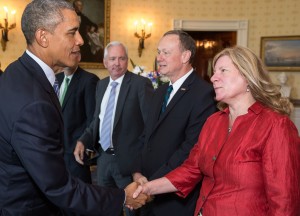 President Barack Obama greets attendees in the Blue Room before he delivers remarks on the Clean Power Plan in the East Room of the White House, Aug. 3, 2015. J. Drake Hamilton at right.
Photo used with permission. (Official White House Photo by Pete Souza)
This photograph is provided by THE WHITE HOUSE as a courtesy and may be printed by the subject(s) in the photograph for personal use only.

Ms Drake-Hamilton was among many representatives of organizations at this major meeting in Washington D.C. 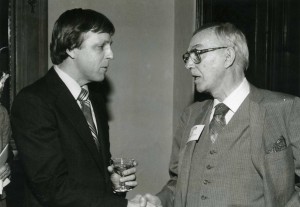 Jim Nelson and York Langton, Minneapolis, in the 1960s. Mr. Langton, a business executive, had for many years been a leader for cooperation among the world’s nations. Mr. Nelson had become very active in groups like the World Federalists.