As 2015 ends, all best wishes for peace and kindness embracing everyone, everywhere. As sung so movingly at Pope Francis’ visit to the Twin Towers Memorial in NYC some months ago, “Let there be peace on earth, and let it begin with me.”
Here are two stories to help bring perspective as 2015 comes towards an end.
Pictured, the old Ferd and Rosa Busch barn between Berlin and Grand Rapids ND, built about 1915; unused since 1997. (Photos by Tom Maloney on May 24, 2015.) The Cottonwood tree (link at the end of this post) remains, about a half mile east of the old barn.
(click on any photo to enlarge it) 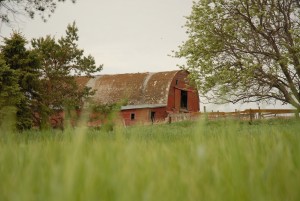 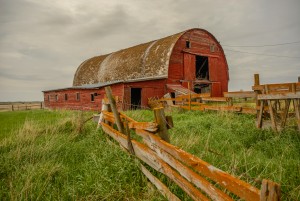 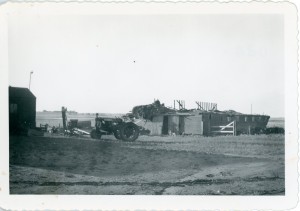 The Busch Barn, the morning after the roof blew off, late July, 1949

The original barn at right, circa 1907. This first barn was just to the north of the second barn.
Busch farm harvest time 1907. Rosa Busch holds her daughter Lucina, Others in photo include Ferd, behind the grain shock; Rosa’s sister, Lena, and Ferds father Wilhelm, and young brother William Busch. It is unknown who was unloading the grain in background. Possibly, it was Ferds brother, Leonard, who also farmed for a time in ND.

ABOUT ANOTHER FARM VETERAN: an essay I wrote about a Cottonwood tree on the same Busch farm, here.
* – The cast of characters for the stories, above:
Someone named Jerome Meyer apparently wrote the story about a barn near Albert Lea MN, which is above. As yet, I have been I unable to verify, or get permission from, the author, or know when the article was written, but his story, from my own childhood experience, rings so very true. It came to me as an e-mail, forwarded by a long-time good friend. My thanks, and if necessary, apology, to the real author of the Old Barn.
All blessings to everyone, everywhere.
COMMENT:
from Madeline, Dec. 12: While I was in Sweden, I learned why barns are traditionally red. Scandinavians brought the concept with them to the US: link here.
from Christina: I so enjoyed the piece about the old barn. It brought tears to my eyes. I forwarded it to my brothers and sisters and my kids. My youngest son bought my folks’ farmstead about two years ago. It’s a different house but still the same old barn. One of my brothers said he thought it would be OK to tear that barn down. I think he just wanted to tell us if we want to tear it down it would be OK. When I forwarded this piece I said I hoped [my son] would let the barn die and fall on its own. My Dad’s name is still written on the milk separator door. The barn has so many memories. Thank you for sending it. I copied the piece so I could keep it.
A Blessed Christmas to you and your family.
from Norm: Like all oldies, even the barn has added a few years: [from the post] “I probably was built in the late 1930’s. I’m too old now to remember the exact year. This makes me well into my 90’s.” We like hearing, “Wow! You don’t look a day over 75.” Wonderful piece Dick and makes me want to do something similar for some of the memories around.
from Larry: Having grown up on a farm, I, too,have have memories of our old barn. I was about 4 when our barn was brought across Bald Hill Creek (which ran through our farm) from somewhere south of us. Playing in the hay mow, milking cows since I was about 7, turning the cream separator before we got electricity in 1947 or ’48. Our old barn “died” when I was a grown man, and my mom had it buried. Now the old house is gone, too, so it is too difficult to visit my old home.
from Jerry: I enjoyed the story of the red barn. I have watched many barns end their life too, including one on the farm where I grew up. As a kid, some of those barns seem enormous and stately.
from Norm: A great observation from the old red barn!
We had two similar barns on our farm, one of which is still standing albeit eight feet lower than it was when originally built on an adjacent farm that my Dad bought many years ago. The thing was toppled by the wind before it could be anchored down on its new foundation and had to be jacked up, that is, primarily the roof, with new sides put in place and some roof damage repaired before it could be used again.
I am sure that it has lots of stories to tell as well and I will have to seek them out the next time I am at the farm that is now owned by one of my brothers and myself.
The other barn was knocked down and buried many years ago just as apparently is the fate of the red barn whose story you shared with us.
Ah yes, lots of good memories, Dick, of growing up on a modest farm (by Iowa or North Dakota standards) albeit with lots of hard work and toil often for very modest returns. On the other hand, we raised our own beef and chickens so we never starved and, of course, never thought that we were poor or whatever.
from Jane: Thanks, Dick. We have an old barn here on our farm, built into our hillside in 1901. Luckily it has had a metal roof for about the last 50 years, so it is doing pretty well. We saved it from pushing out and down the hill about 20 years ago. Our barn was built by Ole and Lena Waage, so we have Ole and Lena’s barn! We’d love to renovate it, if Santa leaves the where-with-all!
https://thoughtstowardsabetterworld.org/wp-content/uploads/2022/04/thoughts-300x138-1.jpg 0 0 dickbernard https://thoughtstowardsabetterworld.org/wp-content/uploads/2022/04/thoughts-300x138-1.jpg dickbernard2015-12-12 10:04:142015-12-12 10:04:14#1091 – Jerome Meyer* and Dick Bernard: At Christmas Season 2015. The Old Red Barn; and The Cottonwood Tree
0 replies