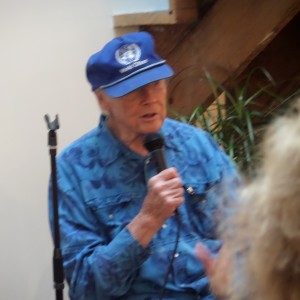 Eight years ago – it was June of 2007 – I decided to drop in on the annual meeting of World Citizen, one of the member groups of the Minnesota Alliance of Peacemakers, of which I was then President.
During this meeting, an elderly man, Lynn Elling, who turned out to be the person who had founded World Citizen back in 1972, stood up and gave his 86-years young rendition of the peace anthem composed by songwriter Ed McCurdy, and made popular by John Denver, and many others: “Last Night I Had the Strangest Dream”.
A couple of weeks later, at the annual meeting of another MAP member organization, Citizens for Global Solutions, Lynn and his wife, Donna, sat down at the same table as myself, and he “set the hook” (those who know him know what that’s all about – for others, he’s a retired salesman!). For eight years now, in varying ways, I’ve tried the impossible, to keep up with Lynn Elling*, WWII Navy officer and lifelong peace advocate.
Early in our acquaintance, I learned that in 1971, Lynn borrowed John Denver for a day, and John sang his song, and another, and talked about peace in our world, for the film Man’s Next Giant Leap, which can be watched here.
I write about this today, for a couple of reasons:
First, Lynn, now closer to 95 than 94, is being transferred to Presbyterian Homes in Bloomington (98th and Penn). A day or two ago, it looked like finis for my friend, but the “old bird”, as he describes himself, doesn’t accept invitations from Father Time readily. So, sometime in the next day or two, Lynn’s health permitting, his friend Ruhel Islam of Gandhi Mahal, Larry Long and myself, will go down and hear Lynn’s story, once again. (If you know Lynn, and plan to visit, call Presbyterian Homes first (952-948-3000); and plan a trip Dec 2 or later.)
We’ll all know that Lynn’s every Friday evening at Gandhi Mahal has probably ended, and it will be a bittersweet visit.
Either of us could pass on before Lynn – that’s how life goes, you know. But the odds are not in Lynn’s favorite in this race: he has a long head start.
He’s run a good race for a lot of years, and it’s getting to be time to move on.
The second reason, relates to Ed McCurdy’s simple but powerful song about A Million Copies….
At this moment in history, it is easy to be terminally depressed about the state of our world. All you need to do is to watch the TV “news”.
But there is a major climate conference going on in Paris which is serious business. Sure, far too late, but going on nonetheless.
And there are major initiatives going on, largely not covered by the “mainstream media” to deal positively with the Syrian Refugee Crisis, and the xenophobia that has gained currency in the current U.S. Presidential candidate contests.
The event of the week is the attempt of politicians to get political distance away from the horrific incidents at the Planned Parenthood in Colorado Springs. Were it not so very sad, it would almost be funny to see the attempts to manipulate the story. If you’ve got the time, read a long summary here.
Here’s what my own Church newsletter had to say about the Syrian Refugees on Sunday: Basilica Refugees001. Places like Basilica of St. Mary take on these issues.
Then there’s the business of “a million copies made”.
When McCurdy wrote his song, “leadership” was considered to be “man’s work”, and getting signatures of a million men was a very, very tall order.
The song was a fantasy.
Today women and kids are far greater players in all ways in this world, with much more power, if they so choose. And the men, not in McCurdy’s room, have far more power as well.
Still it is far easier to click a box on a screen in favor, or against something; or just fall into hopeless mode. “I can’t do anything anyway, why bother?”
But as in McCurdy’s Dream, individual effort is what will, in the long term make the difference.
The future is not to be delegated.
If you can’t make a million copies, make one, or two, or twenty.
Do something beyond your comfort zone, and do it every day. 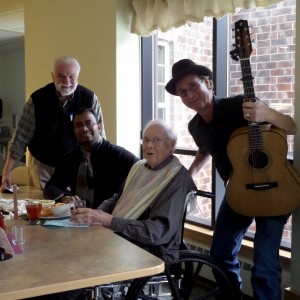