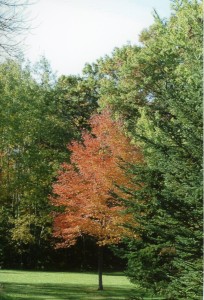 It was quite a week, including Thursday at the Minnesota Orchestra where our 87 year old friend, Don, and I, watched 92 year old Stanislaw Skrowaczewski conduct Schumanns Concerto in A Minor for Cello and Orchestra, Opus 129, and Bruckners Symphony No. 7 in E major. MN Orch Oct 15 105002.
I go to concerts to listen to music; this concert was great…so said the reviewer. Age hasn’t dimmed the maestro’s baton!
The Bruckner Symphony itself is over an hour, and conductors don’t take breaks in their duties. Occasionally the maestro would hold on to the support bar behind him (the bar extended in height by about a foot, likely specifically for him), and I noticed an unused chair beside the podium – just in case? But on he went; and apparently tonight as well.
At the intermission Don and I were talking about keeping on, as Stan is doing: “when you stop doing things, you die”, said Don, with the voice of experience that I, trailing him by a dozen years, can more and more relate to.
Like all elders, Don has his rich stories. Most of his career he worked keeping track of railroad cars for the Northern Pacific RR in the days before computers. But in his younger days, his credits include at least one small dinner party with actress Elizabeth Taylor, and sitting in Joan Crawford’s seat at the Oscar’s one year (she was unable to attend). He was most impressed by Audrey Hepburn, who he met more than once in Hollywood.
Pretty good for a native of St. Paul’s Frogtown.
For Don, for Stan, it’s now past September, and September’s Song fits.
But as we know, there are lots of Stan’s and Don’s around in the world, from, let’s say, March till late December….
A week earlier I’d been at the same Orchestra Hall with Grandson Ted, now 15, and an aspiring musician.
We went to a Jazz concert in the Atrium, and Ted especially watched the drummer, as he’s been asked to be the drummer for his schools jazz band this year. He’s got lots of musical talent, and drummers have a big job. He’s up to it.
The previous night, two of us old-timers were up at our Alma Mater in Valley City ND, to meet Jessica, the first recipient of a class scholarship we have worked on the last couple of years.
Jessica, a most impressive Senior, preparing to be an elementary school teacher, made my day. I was her age, at that college, once…. (photo at end of this post)
Two days later, good friend Joe, another 87 year old, convened a major conference in Minneapolis which went splendidly Oct 9&10. It was, literally, his conference. I wrote about it here. The Workable World conference will, I predict, live on far past October 10, and far beyond Minneapolis…. It will live on, especially, in the abundance of young people who were there; who left with much to think about, and act on.
I saw Joe two nights ago, in a group where a young woman, Mnar, spoke powerfully about “Muslims as the other” in this country. Afterwards Joe wrote some of us about his experience: “[Her] presentation not only shattered a number of stereotypes about Muslims and women, but also provided some much needed lessons about the slanted way we get — or fail to get — the news.”
*
The past few day, in a physical sense, have been tiring. I am ready to “couch potato”. But that lasts only a little while.
Last night I gave in and joined Lynn, 94, for dinner. Lynn will die with his passion of world peace on his lips. He will never, ever quit.
Rebekah and her friend Quinn, students at a local University, brought him to our meeting, and the four of us had a too short conversation which needs to continue.
It was an inconvenience to meet last night, but it was one of those meetings I will remember far beyond last evening.
I think of a sign I saw at my coffee shop yesterday morning, and photo’ed especially for Joe.
It is below. It applies to every one of us, regardless of age.
It’s now October, and there is still hope…. 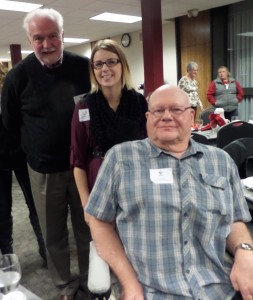