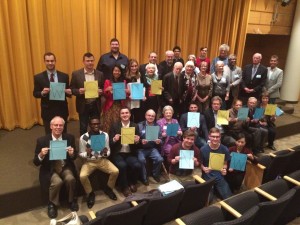 Those remaining at the very end of the second day of the conference. Photo by Claude Buettner 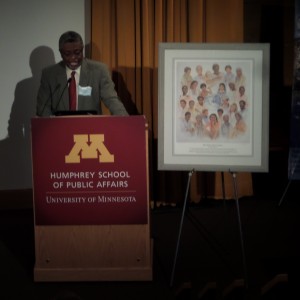 First things first: it is impossible to summarize the Workable World Conference I attended on Friday and Saturday, October 9&10, at the University of Minnesota.
Here is the program booklet: Workable World Speakers Oct 9-10 2015. The entire conference, every speaker, was videotaped for later use, and later there will also be proceedings published for posterity. Check back at this spot in some months, and I’ll include an update.
I attend meetings frequently, both to learn something, and to give support to the process. It is much like the synergy of a basketball game. The team can play the game, but it helps a great deal to have someone in the stands – an audience. But it has been my experience that there are always “ah hah” moments, small or large insights that flow out of some comment, or an amalgamation of several comments: learning moments; insights.
There were a lot of these for me Friday and Saturday.
(click to enlarge) 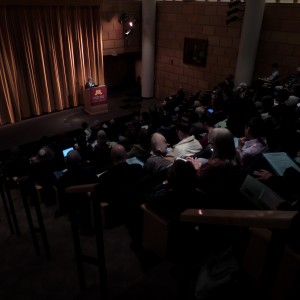 At some point in the proceedings it occurred to me that there were roughly as many registrants for the conference (over 200), as there are countries in the UN (193), so I began to imagine each of us in the hall, including the speaker, as a “country”.
Of course, all is not alike between countries. One of we audience members, for instance, would control 25% of the Gross National Income of the entire world; another has 20% of the world’s humanity. (These are the U.S., and China, of course.) (This data an much more from Transforming the United Nations System by Dr. Joseph Schwartzberg. I highly recommend it.)
Then, there are those in power positions (I was one of these, controlling the portable microphone!) And, of course, those who registered but never came to a session, or could be there for only a short time for one reason or another.
Whatever the case, this was a melting pot of sorts: experts, critics, supporters, all with a common interest in ideas about the United Nations System. 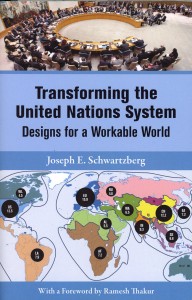 One speaker, in answer to a question, described the UN at 70 to be much like an airplane over New York City which has a problem with a wing which has to be repaired on the fly.
This provided rich imagery for me, about how the immensely complex business of the United Nations is an endless series of crises to manage amongst people with different priorities.
What if, I thought to myself, we in that audience at Cowles Auditorium had some problem dropped on us, and there was no one to decide except ourselves?
Given how people can be, it could be a dicey proposition to even decide on a simple matter. It’s easy to despise “government”, but one sort of government or another is essential to individual and group survival.
The conference was expertly moderated by Prof. John Trent of the Centre on Governance at the University of Ottawa; Maryam Ysefzadeh and Tim O’Keefe of Robayat helped quiet our minds with gentle Persian music. 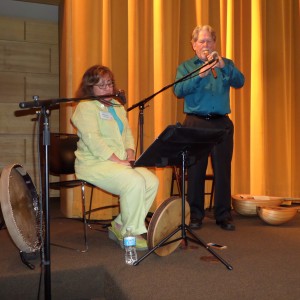 We were reminded that the United Nations was a creation of a specific moment in time, post World War II. Change is required for any such organism, and indeed change is happening in small increments and in less than obvious ways (from the bottom up, for instance.)
But imperfect as the institution is, it is far far better than the alternative of no United Nations.
That is my main takeaway. With all its fault, the United Nations is essential to our future as a planet…and I think the collective speakers and audience and most of the rest of humanity know and appreciate that. 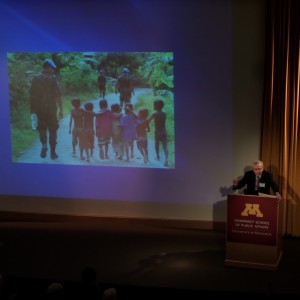 Prof Robert Johansen of the University of Notre Dame spoke on the dilemmas and realities of Peacekeeping in the contemporary world.

POSTNOTE from Dick Bernard: As one would expect from an academic conference, there were many comments of note, that stick in my mind: here’s a single one for starters. A speaker talked about the U.S. role as present day hegemon (which I define as “big dog”) of the planet. Of course, there have been successions of hegemons over the centuries, and ultimately they all overreach – something of a nation version of the Peter Principle: each rising to their level of incompetence, then collapsing….
It was observed that President Obama, in his role as leader of the U.S., has been working to tamp down a bit the U.S. tendency to interfere in everything, everywhere. This diminished interference can be interpreted by some as weakness, but at the same time, it is a strategy that helps to keep the U.S. as primary hegemon of the planet. In an odd, but logical way, the actions of President Obama support the objectives of the very people who are most critical of him as being weak and ineffective. And at the same time, those who would promote a more aggressive policy of particularly military engagement in the world would act against the U.S. own hegemonic interests.
At least for me, there was a lot of food for thought in this observation, such as I heard it stated.
https://thoughtstowardsabetterworld.org/wp-content/uploads/2022/04/thoughts-300x138-1.jpg 0 0 dickbernard https://thoughtstowardsabetterworld.org/wp-content/uploads/2022/04/thoughts-300x138-1.jpg dickbernard2015-10-12 12:23:192015-10-12 12:23:19#1071 – Dick Bernard: Getting perspective on the UN System at 70.
0 replies