POSTNOTE, May 29, from Kathy G: A one-minute ad without a single word, for Memorial Day. “This is a one-minute commercial. Not a word spoken and none is needed. Food City is a Southern grocery store chain with headquarters in Bristol, Tennessee.” 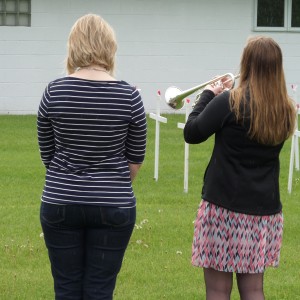 Reunion over, and about to leave LaMoure ND, we and my brother John decided to attend the annual Memorial Day observance at the LaMoure American Legion post. It is always moving and inspiring – an honor to attend, as is the usual observance by the Veterans for Peace in St. Paul MN which I had to miss this year.
I had been to several observances with my Uncle and Aunt in LaMoure over the years, so I knew what to expect, but brother John, long retired from a 20-year career as an Air Force officer, and long-time Californian, was deeply impressed with the local observance, as was my wife, Cathy. Neither had been there before.
Monday was an iffy day, weather-wise, but the place was packed as usual, with music provided by local high-schoolers, with the reading of names of departed veterans, and a couple of very good speeches. (I can’t name names: my program departed the car enroute home during a windy and rainy stop to change drivers at Fergus Falls.)
At the end of the formal presentation indoors, we adjourned to the vacant lot beside the Legion where crosses were planted, poppies affixed, an honor guard with flags and rifles for the traditional salute, and then taps, expertly played by a young woman, probably high school age.
We had a mix of near sunshine, and light rain, almost perfect.
It was all deeply moving.
(click to enlarge all photos) 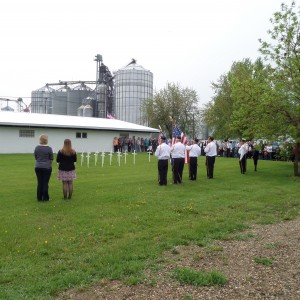 Inside, the narrator had earlier read the names of all local military veterans who have died.
Even in this small community, it was a very long list of names, particularly for World War II, and World War I as well. As I remember: departed veterans were named from the Civil War, and the “Indian War” during the same time period; the Spanish-American; Korean, Vietnam, Gulf, Iraq and Afghanistan Wars.
This observance emphasized the physically dead. Back home in the evening I noticed that the national observance on the Capitol mall now recognizes also those veterans permanently physically disabled by war. The Vets for Peace recognizes all of these, but also those mortally wounded psychologically: PTSD, mental illness, drugs and alcohol, homeless….
Saturday, I’d seen the reader of names at the fish dinner at the same Legion, and he said that every year somebody mentions somebody not named who should have been on the list.
Little did I know that I’d be writing him my own letter today. He read the names of my uncles, Shipfitter Frank Bernard (USS Arizona), and Lt. George W. Busch (USS Woodworth); but not those of Uncle Arthur Busch (U.S. Army 1945-46), nor Art and George’s cousin next farm over, Capt. August Berning, Marine in the Pacific Theatre WWII, both deceased.
So next year, the narrators list will be even longer, thanks to me, and to others who also add names, and, of course, more veterans who have died in the days to come.
*
The recitation of names by War caused me to think about categories of Wars in which the U.S. been engaged, and how people have engaged in those wars. (In a previous post I included an American Legion summary of these wars: America at War001)
Of course, the early wars, including the Revolutionary, came as our country grew to today’s boundaries of the lower 48 states. Wars brought us into being, over 150 years ago, against England, etc.
But by far our most deadly war was our own Civil War: the same war which birthed the very concept of Memorial Day. We were at War against ourselves, then. It is not an abstraction to think that perhaps the current “war” between Sunni and Shiite centered in Iraq and Syria might not be such a novel occurrence. There are far more similarities than differences to our own Civil War. In our own country, the Civil War was brother-against-brother; slavery or not was the main issue; plenty of Old Testament scriptural basis supported slavery.
Then there were the Teddy Roosevelt adventures: Spanish-American War, Cuba, the Philippines, etc. That was my Grandpa Bernard’s War: North Dakota’s were among the first volunteers to go to the Philippines in 1898, and Grandpa was on the boat with the others.
The deadliest wars so far, WWI and WWII, the U.S. entered long after they began, reluctantly. There was debate whether we should have entered earlier, or not at all. Wars are complicated things, after all. In WWI my Grandpa Busch’s hired man, whose name I do not know, was killed. Grandpa wanted to volunteer, but there was the matter of his being ethnic German, which complicated things a whole lot for Germans in this country.
Then there were the anti-Communist Wars, like Korea and Vietnam, and the near miss with Cuba and Russian Missiles in 1962 (I was in the Army, then). It’s been years since the Soviet Union became Russia and other countries, but the “Communist” card is still played by some, perhaps yearning for the good old days of the Cold War. Wars have an unfortunate way of living on, far past their reason.
And there have been wars just for the hell of it (it seems to me): Grenada comes to mind. Remember the Grenada War?
*
Through Korea, Wars were very personal things: if you were at war, you were at war against someone who could shoot you dead. The days of massive standing Armies and compulsory draft are long past, the times when (as in my own family) we three boys all served; or four of my five uncles (the fifth was needed on the farm). The notion of a citizen Army (males of a certain age) ended with the end of the Draft in 1975 and (in my opinion) will never be successfully marshaled again, even in times of major crisis.
Memorial Day remembers old wars….
Now war has become a video game, threatening every single one of us, if we can’t figure out how to deal with each other, including the top guys who have led and will lead people into these ever deadlier things called war.
“Evil” will never end (not always restricted just to the “bad guys”). Yes, we can be the bad guys, and have been.
And, there is much to be said for “duty, honor, country”.
But the reality of evil, and those honorable concepts can be and are misused by all “sides”, including our own.
There are lots of alternatives to war, and while peace can be very messy in itself, it far exceeds the never-ending problems with attempting to win the peace by war. That has never, and will never, work.
Thanks, LaMoure American Legion, for a most respectful and sombre Memorial Day 2015.
I will not forget. 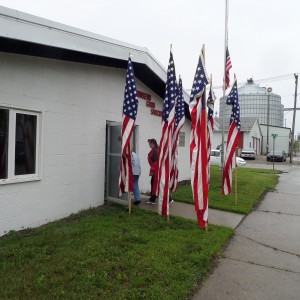 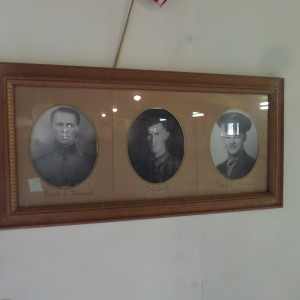 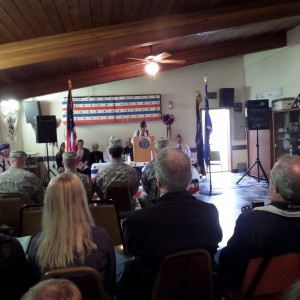 The Reader of the Names 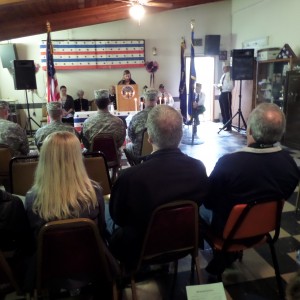 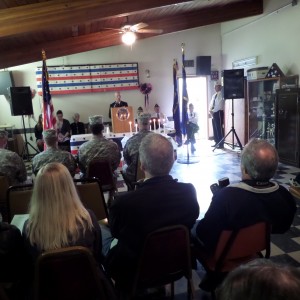 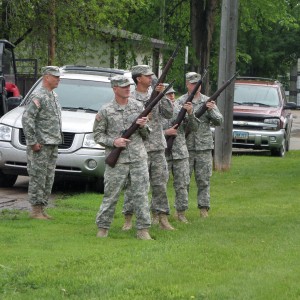