My nephew, TJ Hedeen, died during liver transplant surgery on April 15, 2008.  He was 36.  He had a congenital liver defect.  He was a great guy, and left behind his wife, Mickey, and two stepsons, Bryant and Brace. 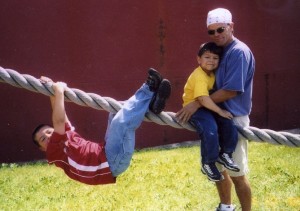 TJ’s death touched us all, but few as much as my son-in-law John Hagebock, a little older than TJ, who resolved to not  let TJ’s death be in vain.
John decided to make his contribution by drawing attention to organ donation programs, specifically Life Source.  #mce_temp_url# His first action was running the Twin Cities marathon on October 3, 2008.  It was his first marathon, and he finished the race. 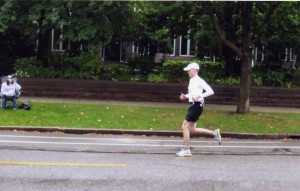 John nearing the finish in the Twin Cities Marathon Oct 5, 2008

The 2008 race was John’s warm-up.  He decided to do a reprise in 2009, but to up the ante a bit.  He began to quietly promote participation for TJ in the 2009 run, October 3.
By race day John had fresh running shirts advertising Life Source, and six more runners to “share the colors”.  He again ran the marathon; the other recruits were willing to do the ten mile segment.  Two of the six ended up injured, and couldn’t compete, but the other four finished the course.
John was a bit disappointed that he had only four new people on the course this year, but I’m really proud of what he accomplished.
He plans to do the same next year.
I suggested to him that a worthy objective would be to work with his new team to convince each of them to recruit two more runners for next year, and thus start a tradition of growth.
His program is off to a great start.
Congratulations, John.  Good running!  Good work!
There were doubtless many others in the thousands of runners who similarly were engaged in using the run as motivation for doing good for others.   Congratulations to them, as well.  They gave additional meaning to the race as well.
Again to readers, if you’re not familiar with organ donation programs, here’s a good chance to learn: #mce_temp_url# 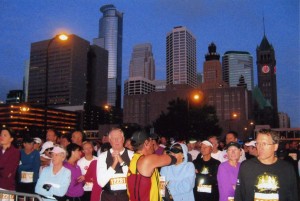