Twenty four hours later, I attended a rather remarkable event at Basilica of St. Mary in Minneapolis, where a distinguished speaker, the General Secretary of the World Council of Churches, and a distinguished responder panel talked about “The Past as Prologue: the Reformation and the Future of Christian Dialogue”. In between was eight hours on the road, yesterday, with my brother. Suffice: it was a rich and exhausting 24 hours or so.

And, of course, devastating Hurricanes continue ‘front and center’ on news pages.

1. Ken Burns film on the Vietnam War screens on your local Public Broadcasting Channel, beginning Sunday evening September 17. There will be ten nights of programs, with the final segment on September 28.

I have always had feelings about this topic, as I’m an early Vietnam era Army veteran (1962-63, stateside), and my two air Force brothers served in southeast Asia war during the late 60s and early 70s.

I will write specifically about Vietnam War from my perspective in a few days. (In Vietnam, the conflict is called “The American War”). Whatever its name, the conflict covered a thirty year period, beginning 1945, and ending April 30, 1975, with the fall of Saigon. “There is no single truth in war” is an apt introduction, in my opinion.

I urge everyone, particularly high school age and young adults, to view and discuss this entire series. Our moderator on Thursday said he was six months old when the Vietnam War ended in 1975. He’s 42 now…. Vietnam began over 50 years ago. Burns Vietnam is no abstract war film. It shows the reality of the times; the reality of war.

Here is the PBS magazine, at least the pages which talk about the programming upcoming: PBS Vietnam Sep 17001

2. 500 Year Anniversary of the Reformation. “The Past as Prologue. The Reformation and the Future of Christian Dialogue” 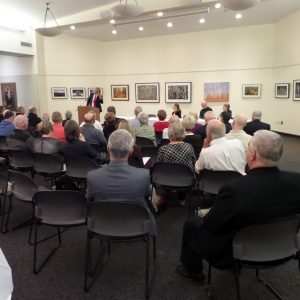 In my growing up, as Catholic, I could not have conceived of a gathering such as I attended on Friday night at Basilica of St. Mary, the co-Cathedral of the Diocese of St. Paul-Minneapolis.

There were over 70 in attendance, including as speaker the Secretary General of the World Council of Churches, and the Archbishop of the Diocese of St. Paul-Minneapolis, Bernard Hebda. Here is the program for the evening: Past as Prologue001

Everyone has their own opinion about religion, relationships between churches over the centuries, and the often less than benign role of religion in war itself, including today. Christianity in substantive ways has been at war within itself.

As noted, twenty-four hours earlier I had been to the preview of Ken Burns “The Vietnam War”. As noted in the above photo, the complexity of the debate about “Truth” in War was stated, and even within the audiences on Thursday and Friday there was likely a long-learned sense of conflict about “who is right”.

How can there be different “truths” about War? Or Christianity and religion generally? Well, there are differences. And pretending there is only a single valid “truth” is not productive, in my opinion.

The Reformation raises the same intense question about “Truth”. For 500 years within Christianity itself, there have been differing interpretations of Truth, often intensely expressed.

I thought the evening to be very stiumulating, and I plan to attend some of the ongoing events, which can be reviewed here: Reformation001

3. The March of the Hurricanes: About two weeks ago I used this space to follow the story of my nephew Sean and family in Houston.

It seems like ancient history, and the recovery is still at its earliest stages in Texas. This becomes a lonely time, when it seems no one is interested in the plight. Harvey is old news, shoved off the news by Irma about to reach Florida, or other crises du jour. And there are new hurricanes in the wings, and, I suppose, Typhoons in the Pacific area. Very soon Florida will be old news.

The immensity of the tragedies is beyond simplification.

On Thursday, the tiny island of Barbuda, a place I had never heard of, was basically destroyed, and its entire population evacuated to nearby Antigua. Barbuda’s website remains frozen in what it was before the hurricane destroyed the tiny country.

Friday, I picked up my brother at his hotel near the Mall of America, and he said that he had been chatting with a couple from Ft. Lauderdale Florida area who, when the prospects of hurricane hitting Florida crossed their screens, called the airport, made reservations for the next plane available. It turned out to be Minneapolis and so they came here for a vacation. At the time, Florida was anticipating the possibility of Category 5 Irma and the Atlantic coastal side. Apparently they could afford the potential disruption at home.

I don’t know if their property will be damaged by the storm, but I was struck by the contrast between the people of Barbuda, traveling in an open tow boat to some refuge on Antigua, and the couple who could take a vacation far ahead from the troubles back home in Florida.

All is so very complicated, and made to sound so simple.

Keep everyone in your prayers and do what you can to support the recovery efforts wherever they are.

Dick Bernard – A look at immigration, past…. The Nobel Peace Prize Forum
Scroll to top