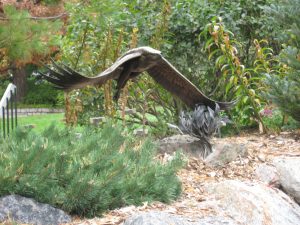 Personal opinion: like an eagle, or any bird, or any human, or animal for that matter, any system needs to be in equilibrium to function well. A bird with only a dominant right wing – or left, for that matter – does not function well. A smart bird with only a head cannot fly…. Why, then, seek to dominate or even eliminate the other, or try to prevail as a dictator? It doesn’t work in nature; why should it be any different in political systems.

Some years ago I “notched” over 50 years of filing tax returns. They are as sure as is April 15 each year. I know the drill.

I suspect that there are some people who like to pay taxes. Actually, I don’t mind paying my taxes either. Taxes go for things like fixing potholes, or someone to answer the phone for a 911 emergency, and on and on and on. Lots and lots of people make their living in jobs paid by taxes. Some of these same folks hate taxes.

Taxes are the price we pay for a civilized society.

But that’s about where the civil conversation ends. “Tax Reform” has been the rage for years and years and years, and once again it is the rage, and today in Washington DC, the latest version will probably roll out of the House of Representatives, promising nirvana, tax cuts for everyone, more money in the pocket to spend on lottery tickets, more chickens in the pot, eliminating things some people think are undesirable, or whatever.

Am I a cynic? You betcha.

The President badly needs a “win”. Killing Obamacare didn’t work. “Tax Reform” is a next round. Tax cuts were to be paid for by elimination of Obamacare. That didn’t work…at least initially…now full speed ahead. No one knows the future except…

…the clear winners will be the already very wealthy and the big corporations.

The additional tax bite for the rest of us will come in varying ways, likely not until after the 2018 elections, not even called “taxes”…that’s how the shell game will work: give a little gift early; delay the hit until later, and inflict it in other ways – higher medical premiums if you can afford insurance, etc. Exactly what the hit will be, and where from, or who is hit the hardest, are the real questions.

Now is a time to look at legitimate news sources, more than just the one you trust. The truth of the pudding is available. It won’t reliably come from the practiced spin-makers, the advocates who sincerely look you in the eye on television, or craft perfectly drafted op eds. It’s up to each of us.

How much taxes does a person pay? It takes a little work, but everyone can find out for themselves. It likely isn’t what you think.

But every year we’re lucky enough to be in the 25% tax bracket for federal income taxes. A chart I saw once put our income in the 78th percentile among Americans. Two pensions from our work years, two 401k’s, two social securities…. We don’t live “high on the hog”; neither are we poor.

Earlier this year I took a closer look at our 2016 tax return. Remember, I said we make the 25% bracket for federal tax, every year. (I don’t mention state taxes, and we’re a so-called high tax state).

Bottom line: in 2016, compared against out gross income, we paid 11% for Federal and 5% for State taxes, or 16% for the privilege of living in this country. Of course, there are other taxes: gasoline, for things like roads, and on and on.

I don’t know what the legislative sausage will look like once it goes through the meat-grinder this year, starting with the federal, then the state, then the local….

Quite certainly, it won’t be to the advantage of the lower income folks. The real beneficiaries will likely be those who already have far, far more than they need. They have the lobbying power, the money to finance political campaigns.

Every American has a vested interest in what happens in coming weeks and months. Make your voice heard, and get active in the political process.

COMMENTS:
From Norm: I appreciated reading your observations regarding taxes.

My father always told my brothers and me that he was just happy to be able financially to pay taxes let alone owe them.

Paying them is not always the most pleasant thing that I have to do be it income or property taxes but I do it and fully expect all others to do the same…which I fully realize is rather Pollyanna on my part given the various loop holes in the tax code for folks and organizations to use to minimize, i.e. in some cases to avoid paying altogether, their tax obligations.

I think that paying taxes is an obligation of all citizens as they all should share in both benefits of living in the US as well as the cost of providing those benefits.

The bothersome aspect of the tax code to me is that it appears to protect and/or favor certain portions of the tax paying universe at the expense of the others….and, of course, it will continue to do that even if and after the GOP tax plan is approved and Trump has his “needed win!”

And, yes, I benefit from some of the “loopholes” as well including the deductions regarding state income and property taxes but…

Folks have to perceive that the tax system is fair and equitable in order for them to generally want to “pay their share” as it were. It is a voluntary system albeit with penalties for those who do not volunteer to pay as it were which can become very dysfunctional if folks begin to think that it does not treat everyone equally and fairly.

A democracy works when its participants all believe that they are all in it together sharing the burdens fairly related to sustaining the system of government.

Trump and the Republicans never seem to understand that…no, make that, they never seem to accept that preferring instead to rely upon the long discredited “trickle down” theory of economics to expand and grow the economy.

Unfortunately, too many folks that get hurt by that theory too often vote Republican.

World War I, and War, generally. “Sex, Religion and Politics”
Scroll to top