Wednesday was the International Day of Peace, set by the United Nations as a permanent day to highlight the cause of peace in our world.

Thursday evening I was privileged to be able to hear about the International Criminal Court (ICC) from two representatives from the Twin Cities NGO, World Without Genocide. Your time will be well spent at their website. It was a very powerful evening. 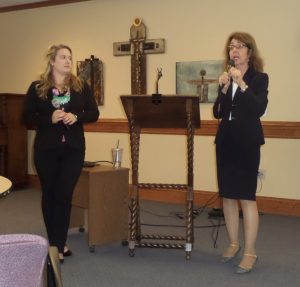 Below are links provided by World Without Genocide which give much information about the ICC. One of the major problems in coming to understand this court is that the United States is one of countries who have not joined. 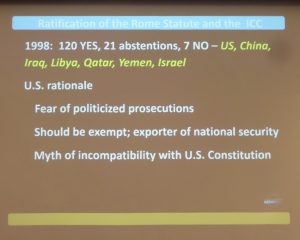 These days it is easy for me to drift into “hopeless” mode…and I am not one inclined to pessimism.

In the discussion period I asked the presenters a question, based on my own career experience in negotiations. In essence: at the start, presumably there is a zero point where there was no sense that there would ever be such a thing as an International Criminal Court. There is also a point where there may be seen, however dimly, a point where the ideal of justice through a world of law prevails.

I asked, along that continuum, where are we at this moment in history?

Neither would present a number (such as “20”….) but Dr. Kennedy observed that there has definitely been significant progress, and suggested positive momentum as well. The very existence of an International Criminal Court with 124 subscribing member countries (among about 193 members of the UN) is strong evidence. One of her main points was her suggestion that there are, today, a great number of activists for human rights everywhere in the world. There are several thousand NGOs with consultative status at the United Nations, most whose focus in some way is on some aspect of human rights. There is, in essence, a strong and public infrastructure in visible support of justice and peace.

By consciously inserting historical perspective, by no means is all hopeless.

Take some time to look at the resources below, and get involved. Join the mailing list of World Without Genocide, or some other organization.

For those with an interest, there is abundant information available about ICC. Among the sources, as provided by World Without Genocide:

Ben Ferencz, now 97 years of age, is a particularly significant figure. By circumstance, his very first case as a young lawyer was to successfully try and convict 22 SS (Einsatzgruppen) perpetrators who were responsible for killing over 1,000,000 people in WWII. That is why I hi-lite his website, above. His book, PlanetHood, with Ken Keyes, Jr., remains one of the standards for persons with a passion for peace, and easily available through his website. 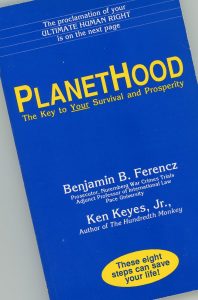 A gift, April, 2003. The book is still easily available, only with a different cover.

And upcoming in less than a month, at the same Third Thursday, will be a presentation by another such group, the Advocates for Human Rights on Thu Oct 19, 2017 at Plymouth Congregational Church, Minneapolis, sponsored by Citizens for Global Solutions MN.

“A few more points of optimism:

-The UN has an office on genocide prevention.

-The US State Dept. has – who knows what, as of today, but something akin to that.

-There are BA, MA, and PhD degrees in human rights and in holocaust and genocide education throughout the US.

-Similarly, there are now BA, MA, and PhD degrees in social entrepreneurship, the academic discipline where civil society is studied and promoted.

-The Association of Holocaust Organizations has a membership of more than 900 organizations worldwide, most of which sponsor programs, outreach, and opportunities for broad civic education and engagement.

-There is significant production of scholarship, memoirs, films, exhibits, etc. in the field of genocide history.

-There are memorials to most of the genocides of the 20th century in key locations around the world.

-Universal jurisdiction has been used to prosecute some of the world’s worst perpetrators.

-Laws have changed to make sexual violence a crime against humanity and rape a crime of genocide.

-Most law schools have courses in human rights and humanitarian law. 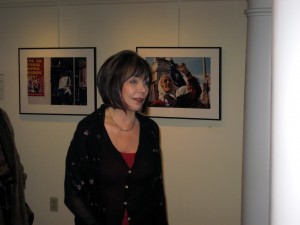 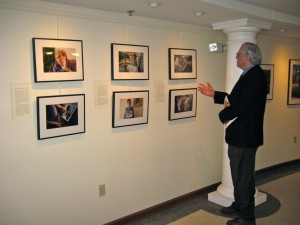