I walked with U.S. Senator Amy Klobuchar in the annual Woodbury Days parade yesterday. While I didn’t count, it seemed there were perhaps 30 of us, along with the Senator and her daughter, on the approximately two mile walk. Cathy, my wife, walked as well, as did Amy’s daughter. (click on photos to enlarge) 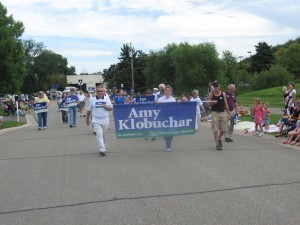 Over the years I’ve walked in a goodly number of community parades, supporting one political candidate or another. It is the very least I can do: to give support.
Whoever you see in a parade is working, no question about that. Amy and her daughter had been at the State Fair before the Woodbury gig, and went back there afterwards. We love to hate our politicians, but when they need to somehow touch base with, in Amy’s case, 5 million constituents, campaigning is also very hard work.
This year, unlike any of the others, I wondered how the folks along the route would respond.
We are, after all, in a time of hostility towards “government”, particularly “Washington” kind of government, even more particularly “Congress”, of which Amy Klobuchar is one of 535 sitting members. I see blood-vessel exploding rants against “them” frequently, as if they aren’t selected by “us”. One does begin to wonder if the community, local or greater, is full of these out-of-sorts flame-throwing folks.
Home afterwards, checking e-mails, was yet another anti-Congress e-mail – this the one which essentially suggests that our country should be run by volunteers who get paid the minimum wage and serve only one term…. Amy Klobuchar is one of “them”, of course.
Another was this, more positive little poem, though (it seemed) pointed at our entire body politic, including the politicians:
“What’s this proclivity
For increased incivility?
Is this what evolution picks?
If so, the genome needs a fix.”
But as we walked our route on a pleasant Woodbury day, yesterday, there was no sign that I saw or heard that suggested that the crowd watching was at all surly; rather it was respectful and, in fact, interested.
We tended to get a bit behind, solely because Senator Klobuchar was doing what good politicians do: engaging with people on both sides of the street. 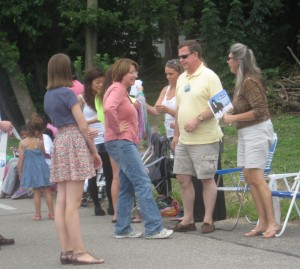 I sensed a respectful audience for this public servant doing a necessary ritual for politicians in this country yesterday. Doubtless there were people along that route who don’t like the Senator, perhaps some who went back to their computer, as I have, but to raise one complaint or other about her and/or her colleagues. Governing a deliberately politically polarized country is not easy.
But the America I saw along this one parade route in Woodbury yesterday was a respectful and welcoming one.
It was my privilege to be along in support. 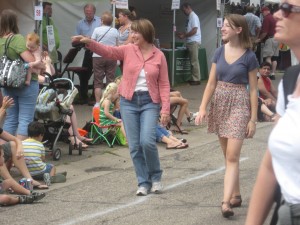 Amy Klobuchar and her daughter at the end of the Woodbury Parade Route August 28, 2011

This letter of mine appeared in the October 13, 2010, issue of the Woodbury Bulletin, our local newspaper. Our suburb of about 60,000 population would be considered as prosperous, with a great number of school age children and a correspondingly great number of younger parents who have very good jobs and live in nice houses.
“A year ago – November 3, 2009 – I voted in the [local school district] ISD #833 School Board election. I always vote, and I was aware, this time, that the polling place was like a mausoleum on a slow day: empty and quiet.
There were ten candidates for four open seats on the South Washington County #833 School Board last year.
When the votes were tallied, the numbers revealed that only 6% – one of every 16 – eligible voters had even bothered to go to the polls. The candidate receiving the greatest number of votes polled 3% of those same eligible voters. That person sits in office today because one of every 33 local citizens took the time to vote.
The turnout was a disgrace.
The election was, in my view, an abominable development, a black mark on this affluent community of ours with a very large (in relative terms) percentage of school age children. If we don’t care who represents our kids interests, what do we care about?
(My bet is that virtually no one in this town could name, without going to the school district web site, the person I identify above. This is no reflection on the individual, it is a reflection on we citizens.)
Everyone of course can have their own excuse for not voting last year, or ever. There are always excuses.
There are also good reasons: like an emergency hospitalization on the day of the election, or such; but mostly we’re talking about excuses.
And when one adds in those who vote with absolutely no knowledge of who they are voting for, we are looking at a democracy that is not well.
In a very short while we again go to the polls.
It is expected that far fewer will vote in 2010 than voted in 2008, though the stakes for all of us in the upcoming election are very high.
The marquee races (Governor, Congress, our State legislators and the like) get almost all of the attention, but they are not the only races:
This year we Woodbury voters are being asked to select one Judge from among 24 candidates in the 10th Judicial District.
Sixteen citizens have filed for two Woodbury Council positions; and there are six candidates for Mayor of our community.
These are much more than first or last names on lawn signs.
This message is a plea to citizens to not only vote, but to vote well-informed – to actually know something about the person for whom you are filling in the blank on the ballot Nov 2.
We have the right to vote in this country; we have the responsibility to vote well informed.”