A week ago today I was walking in to a place called Tar Paper Annie’s, a recently collapsed shack in the woods overlooking Bear Island Lake just north of Northern Lights Lodge near Babbitt MN.
The occasion was the farewell to my cousin, Vincent Busch, who passed away in January of this year. The shore of the lake would become one of the final resting places for his ashes.
I hardly knew Vince. I was nearly 11 when he was born; by the time I was in college, his family had moved hundreds of miles away and our paths rarely crossed. In the circle after the Memorial, at Tank’s in Babbitt, where we introduced ourselves, I identified myself as Vincent’s cousin, but I had no specific memories to share.
Such is how it often is in these days where we live separated by many miles, differing interests, and all the rest. Even “family” can be and are virtual strangers to each other.
But the ritual of saying goodbye is an important one. Death is always a time for reflection: looking back (memories); but more importantly (I’d say) looking at ourselves. Such gatherings are a time to realize that our turn is, inevitably, coming.
At Tar Paper Annie’s, a few feet beyond the ruins, near the shore of the lake, facing the lake, sat a solitary man, sitting on the ground, playing a harmonica. It seemed a sacred place and time for him, so I didn’t interfere.
As we gathered to remember and to say farewell, it became more obvious why he was there. Roger Anderson had been one of Vince’s close friends in high school, and long afterwards. Vince’s sister, Georgine, remembered “Vince would always speak with joy of the times he and Roger would get together and play music“.
As Roger sat in the doorway of the collapsed shack that Vincent had once called home at a very difficult time in his life, Roger played a profound rendition of “Amazing Grace” on his harmonica*. It was, truly, as good as it gets (click on photo to enlarge). 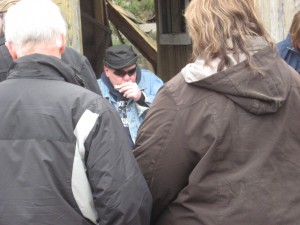 As we concluded our gathering, Roger played “You Are My Sunshine” at that same place, on that same harmonica.
Yes, it was as good as it gets.
Farewell, Vince.
You made a difference. That’s the best any of us can expect.
My photo gallery of the Babbitt events remembering Vincent Busch is here.
* There are many harmonica versions of Amazing Grace on You Tube. Simply enter the words Amazing Grace Harmonica in the search box. In my opinion, none can compare with Roger’s version on May 13.
https://thoughtstowardsabetterworld.org/wp-content/uploads/2022/04/thoughts-300x138-1.jpg 0 0 dickbernard https://thoughtstowardsabetterworld.org/wp-content/uploads/2022/04/thoughts-300x138-1.jpg dickbernard2011-05-20 08:26:232011-05-20 08:26:23#374 – Dick Bernard: Amazing Grace for Cousin Vince