We attended Christmas morning Mass at Minneapolis’ Basilica of St. Mary, where the celebrant was Archbishop John Nienstedt of the Diocese of St. Paul-Minneapolis. 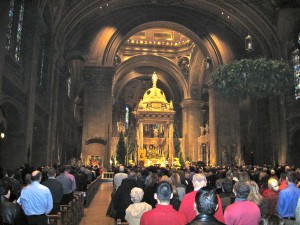 The Archbishop’s homily was on the theme of the importance of words: “what’s in a word”. I was particularly struck by a story he related at the end of his sermon.
He had recently read, he said, a story about a woman in New York City who was shopping. She came across a couple of kids who were warming themselves over a grate on the sidewalk, and she noted that their shoes were particularly tattered, in need of replacement. She went in a store and purchased new shoes for the boys, and a pair of warm socks as well.
On presenting the boys with the gift, one said “you must be God’s wife”. She replied, “No, but I am one of God’s children”.
It was a neat story.
I thought, as the Archbishop was relating his story, about another story I’d heard on public radio some years ago.
The subject being interviewed was a minister in some evangelical denomination who had built a large congregation in a southern state, and earned a national reputation. His specialty was hellfire and damnation sermons. He was very descriptive. He described hell as he and his congregation and followers thought it was.
Sometime during the 1994 Rwanda genocide he related that he was watching a TV news clip about the flight of men, women and especially children from the ravaged nation. That instant, he said, he changed his concept of hell: that those innocent Rwandan children were living in hell on earth.
He came back to the pulpit a changed man, and it was a change with consequences: his flock was not interested in his new reality and he went from relative fame to near obscurity.
He had defined heaven and particularly hell, and he had attracted people who believed as he had believed. When the message changed, they left his congregation, and took their financial support with them.
He had to start over.
As Christmas Day continued, I remembered a personal experience in Haiti on December 7, 2003.
I had never been in Haiti before, and I had not yet been in the country for 24 hours when we went to Sunday Mass at St. Clare’s parish in a poor neighborhood in Port-au-Prince. We six ‘blans’ (whites) were seated in a pew, and a young boy and his Dad were seated next to me.
It became pretty obvious that the boy was angling for a handout, and I was tempted, but I remembered a bit of advice from before I left: be careful with this kind of generosity. Once the word gets around it will be more troublesome than it’s worth. I followed the advice, and while I wasn’t happy, it was probably prudent.
The Pastor, the charismatic Fr. Gerard Jean-Juste, gave a spell-binding sermon, especially riveting when he switched from Kreyol to English to remind we whites in the pews of the immensely wealthy country from which we came, and our obligations to the poor.
Collection time came and a few people came forward with random coins. This was, after all, a poor parish.
Mass over, we filed out of the church with the congregation, and facing us in the choir loft was a mural of an imploring Christ. 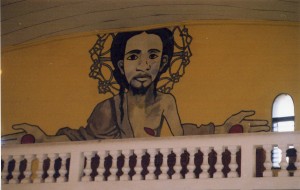 I happen to believe in God. I have no idea who, exactly, God might be, or what God might think of this, or that. No one does, regardless of how learned. I rather expect, though, that God is not as usually portrayed: a powerful White Man.
Perhaps God is really those kids for whom the lady bought the shoes in New York City, or is that kid who sat next to me in the pew at St. Clare’s in Port-au-Prince, or especially those kids in Rwanda.
Just perhaps.
https://thoughtstowardsabetterworld.org/wp-content/uploads/2022/04/thoughts-300x138-1.jpg 0 0 dickbernard https://thoughtstowardsabetterworld.org/wp-content/uploads/2022/04/thoughts-300x138-1.jpg dickbernard2010-12-25 21:31:582010-12-25 21:31:58#303 – Dick Bernard: A Christmas Message "what's in a word"