One of the recent Presidents of the U.S., who was born 100 years ago on February 6, is having his memory celebrated…by people who were his mentors and advisors. In their words, they are elevating the man to far larger than life status. Perhaps they can enshrine the idea that he was more awesome than he really was?
A short time before, news was that the most recently deceased Catholic Pope is being promoted to be on the fast track to Sainthood…by people who agree with his belief system. Does this internal promotion by his promoters make him a more saintly figure? (I happen to be Catholic, but not in agreement with the fast track notion which cheapens the whole idea of sainthood.)
Both the President and the Pope were at the top of their respective leadership pyramids (some would call them hierarchies) and are simply two of infinite numbers of persons, past and present, who claim some authority by virtue of being at the top of the Power heap.
I’ve thought a lot about hierarchies over a period of many years, and for a lot of those years, the metaphors of a Wine Bottle and Pyramids very often come to mind. (See below. Rough illustration drawn by me a few days ago – I am not an artist.) 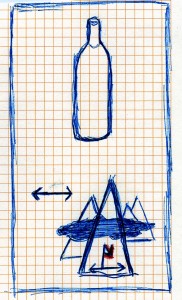 First, the Pyramid:
Our society is dominated by power pyramids. It is almost a natural occurrence of humanity. Where three gather in one place, one probably becomes the de facto or actual leader. There are endless variations on the same theme. I’ve been part of many pyramids; in leadership in some of them from time to time. Even in retirement I am at various levels in various organizations. To a limited extent, hierarchies serve a necessary and even useful function to maintain some semblance of order where there could be chaos and anarchy.
But there comes a point when pyramids become self-defeating and even destructive. There are endless examples, seldom acknowledged by the person and his/her retinue at the top. Failure is assessed in later and more objective history of what happened and why.
As stated, I have been involved in one way or another in a number of organizations and alliances, all headed by some leader or other. Some of them are quite large and important, with a fairly large base (population) beneath the “summit” (President, or whomever). Once in awhile I was the leader of such a group.
Over many years I have come to notice that within clusters of Pyramids – for instance, groups which have some kind of general community of interest, but represent different constituencies – the assorted leaders on the hill or mountain tops have some specific understanding of each other, including a common vocabulary and, often, playbook (think people like lobbyists and lawmakers). Sometimes they even communicate pretty well leader to leader (the horizontal arrow on the above illustration.) But they remain separate (and less powerful) because they cannot agree on a common vision. They compete with each other.
But, even worse, between them and their loyal supporters and advisers, and their less loyal ‘base’, is an non-penetrable fog bank or cloud, such that they do not relate to their base, nor does their base relate to them. Hard as they might think they are trying – and the leaders are the only ones who can control this – the people that give them their power are essentially invisible and can seem almost irrelevant except as tools to get reelected or reappointed.
Being a retired person, I spend most of my life in this seemingly irrelevant category – a guy below the fog bank, unimportant. It is not a good place to be. And it is even less a good place for leaders to have someone like me who feels dis-empowered.
Enter the Wine Bottle (it could be a bottle including anything, but the shape of the Wine Bottle fits my metaphor best.)
I have noticed often over the years, in many settings and in many, many ways, that people who have climbed to the peak of their respective pyramid can create a bottleneck which can keep their base isolated from outside information, and thus unable to communicate back and forth with persons outside the systems, most especially people who could be helpful to the organization. A place like North Korea might be the most visible example of this bottleneck effect, but the effect prevails anywhere where a leader fears empowerment of the very base which gives him (rarely, her) power.
Inevitably, in each and every case, these isolated pyramidal systems collapse upon themselves, too often to be replaced by new pyramids whose leaders seem to think that they can control outcomes simply by being in control of their small niche.
Leaders should learn that there is a huge amount of richness in the base that is all of us.
One wonders why there are not more visionary leaders who recognize this richness – often the richness of diversity – and use the richness to build a stronger and more enduring and useful system, and in the process make more secure their own feeling of power, built on respect.
One wonders….
Related posts Feb. 6 , Feb. 8, and Feb. 10.