UPDATE/SUPPLEMENT June 19, 2011, here.
As we all do, I dream, and I just awoke from a dream whose essential message I remember. This doesn’t always happen.
I want to share the dream, and speculate from whence it came.
For some reason I found myself as king# of the world, only for a few minutes, able to direct people who were influential decision makers.
Since only a few run things in this world of ours, I didn’t have to speak to all 7 billion people, only to a few. We were in a large, stark, room, and the few of us could gather in a corner. Perhaps there were a dozen of us. Significantly, there were no women# in this directed conversation.
We gathered in a square, each bringing our own platform, which seemed to resemble a school desk such as a student would occupy. They were of random design, these desks. Again, we were all men#.
All gathered together, I gave the direction, which for some reason sticks vividly in my mind.
Each person in this square had precisely two minutes and 43 seconds to say what they had to say. No rebuttal, no debate. Two minutes and 43 seconds.
Then I woke up.
There are people who make their living interpreting dreams. I’m not one of those people.
The back story of my dream perhaps came a few hours earlier when I, along with perhaps 70 others, men and women, participated in a powerful one and a half hours with world climate expert Professor John Abraham of the University of St. Thomas in St. Paul. He started his talk with a satellite photo of the world, specifically Africa; he ended his presentation with photos of his two daughters, age four and five, who are, he said, the reason he’s devoting his professional life to the crisis of climate change. He is, after all, making their future, and that of their descendants. Africa in particular, and the coming generations will reap the consequences of human activity, especially during the period of the Industrial Revolution.
It was a powerful evening.
I wonder if, when I read this aloud, I’ll come out to two minutes and 43 seconds.
*
“Last Night I Had the Strangest Dream”? I first heard John Denver sing that song years ago; it most impacted me when Lynn Elling led us in that song in June, 2007. It was a moment, that one in 2007, that changed my life.
You can listen to John Denver’s rendition at my website A Million Copies. There you can also read about Lynn Elling, and also about Dr. Joe Schwartzberg’s Affirmation of Human Oneness. Dr. Schwartzberg was in charge of last nights meeting, and at the beginning, we read his Affirmation of Human Oneness, appearing at the website in the 41 languages into which it has thus far been translated.
On reflection, my dream was not at all strange.
How about for you?
What would you say in your two minutes and 43 seconds, and to whom would you say it?
Most importantly, then what will you do to put that 2:43 into reality? Not, what will you order others to do, but what will YOU do?
This is an especially important question to the women. Men have mucked things up royally, and perhaps terminally. Women can turn things around perhaps more effectively than any group of men can.
It’s time to act.
Some Resources:
Dr. Abraham’s climate science organization website is here. There is a lot of content accessible here.
A website he recommended is CoolPlanetMN. And another, Minnesota Environmental Partnership.
The organization Lynn Elling founded in 1982: World Citizen. The organization sponsoring last nights event with John Abraham: Citizens for Global Solutions MN. I am privileged to be part of both groups.
(Click on photos to enlarge them.) 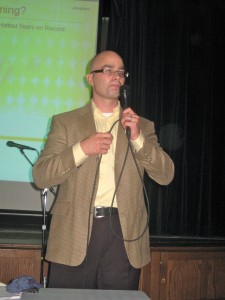 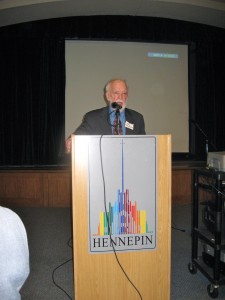 Extra Special Thanks to Lee Dechert who made this program happen. 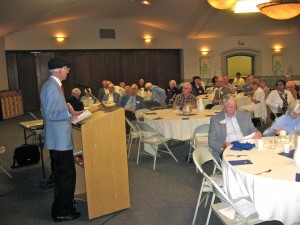 # – A woman friend challenged me on these references. The references were intentional, and as I remembered the dream. It is we men who have and continue to run our world into the ground. More and more women are involved, but until women make the election to take the lead, past mistakes will continue to be made.
https://thoughtstowardsabetterworld.org/wp-content/uploads/2022/04/thoughts-300x138-1.jpg 0 0 dickbernard https://thoughtstowardsabetterworld.org/wp-content/uploads/2022/04/thoughts-300x138-1.jpg dickbernard2011-06-17 06:21:162011-06-17 06:21:16#385 – Dick Bernard: A 2:43 Speech: "Last Night I had the Strangest Dream". A matter of Climate Change and Other Things.