Sometimes seemingly random events have a real element of synchronicity to them: they seem to have no relationship, but in every meaningful way, they are directly related. I recently experienced two such synchronous events.
Wednesday, November 2, I was invited to a house party in south Minneapolis. The event was to recognize the first ten years in the history of a truly remarkable independent and non-partisan organization: Parents United for Public Schools (“PUPS”). The groups website (click here) says it all far better than I ever could.
I was invited to the gathering because in the first few months during which PUPS was evolving from idea into reality I participated in the early organizational meetings of the group. We were something of a ‘rag-tag’ bunch then – simply parents, grandparents and taxpayers who really cared about public schools. Back then, in 2002, there was no organization, no dues, no staff, and thus no guarantee of a future. After a few meetings, a bunch of us sat around in a circle at a library in the west suburbs and had our say. At my turn, I simply urged the group to stay in existence so that it would still exist at the beginning of a second year.
The organizers slogged on (such efforts are never easy), and here they are, still independent ten years later, a recognized and highly credible voice for Minnesota’s children.
At the gathering, Minnesota Education Commissioner Dr. Brenda Casselius stopped by to share a few words about her passion for kids and public education. (click on photo to enlarge it) 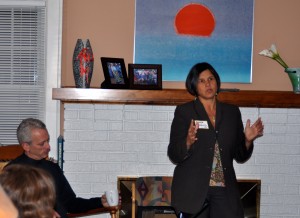 For those who lament that its impossible to change a resistant status quo, PUPS is an excellent validation of the timeless quotation of Margaret Mead: “Never doubt that a small group of thoughtful committed citizens can change the world. Indeed, it is the only thing that ever has.” No one in PUPS is under the illusion that they’ve ‘won’; but their winning is in their continuing to advocate for children and for public schools. They’re in this for the long haul. They won’t quit.
The following Wednesday, I was invited to speak to a group of senior citizens in the south suburbs of the Twin Cities. My topic was public education. This group, like myself, had long before seen their children leave K-12 public education. In not too many years, the over 65 cohort will equal the number of students in Minnesota public schools. I call people like us “outside the walls” of public education.
I took on the task of attempting to briefly capsulize 150 years of Minnesota Public Education, as well as the current ‘lay of the land’ in public education. It is up to the group of 15 folks to judge whether or not I succeeded, but as I was preparing what I was going to present I had in mind the meeting the previous week.
Succinctly, at issue in Minnesota Public Education are about 840,000 public school students (one of every six Minnesotans), using about $9,500,000,000, about one-fourth of the total state budget. This seems like an immense number (and it is) but as I pointed out to the group of senior citizens (all of whom know someone who is actually in public school), this amounts to about $66 per day per student – hardly a kings ransom.
But because the enterprise is so immense and complex and far-flung, and because the consumers, the kids, cannot vote and have little say, public education is a fertile field for near warfare between assorted factions who wish to control both inputs and outcomes. Dialogue and seeking consensus can be difficult.
At the end of my talk (which was “peppered” with lots of constructive dialogue) I identified two crucial areas for the future of Minnesota public education:
1) Minnesotans have to commit to work together to help solve the very real problems in what is called the ‘achievement gap’ in the core cities of Minneapolis and St. Paul and elsewhere where poverty is a problem. There is no room for propaganda or punishment on this need. We must work together.
2) Schools have an absolutely critical need to engage with the huge percentage of us who are “outside the walls” of public education (over 60% of households have no one under age 18 living in them; 75-85% of today’s taxpayers have no children of their own in school). We cannot be left as outsiders.
Yesterday was, today is, and tomorrow is at stake.
Thanks PUPS, and to all who care, thanks as well.
https://thoughtstowardsabetterworld.org/wp-content/uploads/2022/04/thoughts-300x138-1.jpg 0 0 dickbernard https://thoughtstowardsabetterworld.org/wp-content/uploads/2022/04/thoughts-300x138-1.jpg dickbernard2011-11-10 14:51:342011-11-10 14:51:34#470 – Dick Bernard: Public Schools, and the kids in them, matter