UPDATE JANUARY 12, 2011:
My post for today re Haiti.
January 10, 2011 post on Haiti
UPDATE JANUARY 11, 2011:
Twin Cities focus News Release
for the Bells for Haiti Committee:
Honoring Haiti, One Year Later:
Bells to Sound Across Minnesota on Wednesday, January 12th
City Halls, Churches, and Schools to Toll their Bells at 3:53 PM: Honoring Lives Lost in Haiti—and Recognizing Minnesotans who Helped
Contact: Therese Gales, American Refugee Committee
tel 612-221-5161; ThereseG@archq.org
Minneapolis, MN (January 11, 2011)—One year after a massive earthquake devastated Haiti, churches, schools, universities, and city halls across Minnesota will toll their bells in unison on the one-year anniversary of the earthquake—Wednesday, January 12, 2011, at 3:53 PM CST—for 35 seconds, the duration of the Haiti quake.
The Bells for Haiti initiative—started by an ad hoc group of Haiti advocates from Minnesota—has garnered participation from around the country and Haiti. With support of Mayors Chris Coleman and R.T. Rybak and the Archdiocese of Minneapolis / St Paul, churches and schools in communities both small and large throughout Minnesota will toll their bells. Some participants include: Minneapolis City Hall, the Cathedral of St Paul, Luther Seminary, St Mark’s Episcopal, the Basilica of St Mary, Hamline University, St Olaf College— as well as small communities like the Visitation Monastery in north Minneapolis which is home to six Visitation sisters. Trinity Lutheran Church in Hovland, MN, on Minnesota’s North Shore is participating—the bells are caked in ice and snow today…if the church bells are unusable tomorrow, participants will bring their own bells to toll. Communities in Oregon, Chicago, Vermont, Florida, and Haiti are also participating. A full list of participants can be accessed here.
“In just 35 seconds, thousands of people in Haiti lost everything,” said Jacqueline Regis, a Haitian-American attorney and author who is also a member of the group organizing the “Bells for Haiti” effort. “Through Bells for Haiti, we want to bring people together a year after the quake to honor those who lost their lives, recognize the millions of people who still struggle to find hope—and also recognize people from all across Minnesota who stepped forward to help the people of Haiti.”
The earthquake took the lives of 250,000 people and left more than 1.3 million people homeless. A hurricane and cholera outbreak have also worsened the situation. At the same time, thousands of Minnesotans—concerned parents, doctors, school children, architects, teachers, nurses, and many more—stepped forward to help.
“We want Bells for Haiti to be a reminder—that we are stronger together than we are alone,” added Regis. “We want to tell the world that we remember… and will not forget.”
The Haitian Lawyers Leadership Network and the Minnesota Alliance of Peacemakers are co-sponsoring the Bells for Haiti effort.
EVENTS
Two Twin Cities community events are known, which relate directly to Bells for Haiti:
Wednesday evening, Jan 12, at 6:30 p.m., a simple rice and bean memorial dinner will be offered at St. Luke’s Episcopal Church, 46th and Colfax Ave S in Minneapolis. The dinner will be followed by a memorial service at 7:30 p.m. All are welcome.
Thursday evening, 7 p.m., Ruth Anne Olson will read from her book Images of Haiti: Stories of Strength. The reading is at St. Paul’s Episcopal Church, 1917 Logan Avenue South Minneapolis (north end of Lake of the Isles.)
UPDATE JANUARY 7, 2011: Interest/Momentum is building. Note Facebook entry. Please share with others you know who may have an interest.
UPDATE JANUARY 5, 2011:
A general news release describing Bells for Haiti which can be adapted for use anywhere is accessible here.
Visit the Bells for Haiti Facebook page, here.
Map comparing size of Minnesota and Haiti here.
Nearly a year ago, January 12, 2010, at 4:53 p.m. Haiti time, indescribable horror descended on Port-au-Prince and the mountains south of Haiti. Estimates vary, but as many as 300,000 lives were lost, and more than 1.3 million were, in an instant, left without homes. Government buildings, including the iconic Presidential Palace, were destroyed.
The catastrophe followed a season with four tropical storms which devastated Haiti in 2008; and was succeeded by a Cholera outbreak still raging.
Haitians are an indomitably hopeful people, impossible to defeat. But the events of the past eleven months can seem almost insurmountable.
After the quake, on April 26, 2010, 35 individuals representing 25 organizations with long term interest in assisting Haiti met in a Minneapolis church.
The sole purpose of the meeting was to begin to get to know each other.
Out of that initial event came a simple e-mail contact list. It was agreed to call the group KONBIT-MN/HAITI, essentially, a group whose sole purpose is to keep the conversation going between groups of diverse interests. Konbit-MN/Haiti has no meetings, no Bylaws, no Dues, no Fund Raising. Some would say that means it has no purpose, either. Why “Konbit” (pronounced “cone beet”)? The Kreyol definition Here.
It is through the idea of one member of KONBIT-MN/HAITI, and the joint effort of a working group of a dozen members of the alliance, that an idea, Bells for Haiti, came forth for remembering in some significant way the one year anniversary of the devastating Haiti earthquake, January 12, 2010.
“Bells for Haiti, January 12, 2011” is now on the web. Fliers in English and Kreyol are below. Click on either flier to enlarge it. 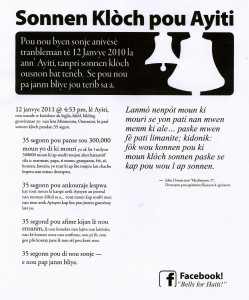 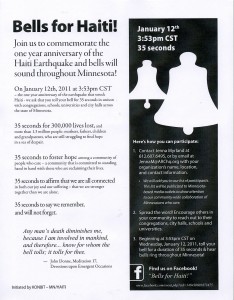