Before April 12, 2013, I can recall only one time ever entering the imposing near-40 year old Hennepin County Government Center in Minneapolis MN. Simply, I’ve never been a resident of Hennepin County, Minnesota’s largest. I go there often for various things, including every Sunday for Church, but I’m not a resident.
That single visit to the Government Center was in the distant past to contest a parking ticket.
On the best of days, Traffic Court is a dismal place, and this was no different. On that day, though, having served my sentence with the rest by waiting what seemed like hours for my turn, justice prevailed, and the ticket was forgiven.
April 12, 2013, I entered the Center from the south, and immediately saw a huge American flag there.
(click to enlarge) 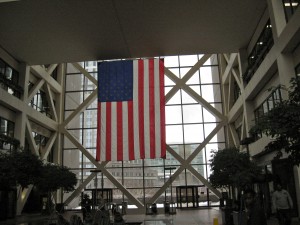 I wondered if there was a story behind the flag, but didn’t get around to ask the question immediately. Some weeks later I was at the Center again, looked more closely at the area around the flag and found no explanation.
Back home I decided to make a phone call to someone at the Center: “do you know the history of this flag?” “No”, came the reply.
I was transferred to someone else in the Tower, who also said they didn’t know, and in turn was transferred to a third person, who wasn’t in the office. I left a message, and subsequently got a return call.
Paydirt: “that flag was mounted after 9-11-01. They just felt they had to do something”, my source said. I didn’t inquire who “they” might be, or exactly when the flag was hoisted. Those questions can be answered at leisure.
More recently, I asked some people I know to ask the same question to someone they might know who frequents the Government Center, and also asked them if they knew the history.
That’s it. One question to one person.
So far, no one I’ve talked to has had any idea why that flag hangs there.
The circumstances surrounding that flag and the lack of knowledge bring forth lots of questions to discuss, but that’s not only the reason for this post.
I was at the Government Center that day in April because of a question about another flagpole, visible through the north window of the Government Center. 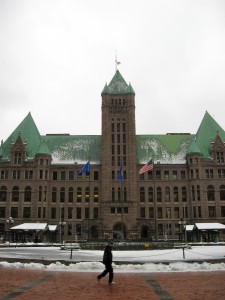 Flags of Hennepin County, Minnesota and the United States on the Plaza between the Government Center and Minneapolis City Hall, April 12, 2013

Until March 27, 2012, one of those flagpoles flew the United Nations flag, as it had flown there for 44 years. It first flew May 1, 1968, as a symbol of Hennepin County and Minneapolis’ friendship with the entire world: world citizenship. It had been taken down March 27, 2012, for specific and erroneous reasons.
(There was a pretext for taking down the flag, not supported by Law. I’ve done the research. The supposed Law was the excuse, but not a valid reason.)
Six of the seven current Hennepin County Commissioners were in office at the time the UN flag was taken down, and decline to give me specific reasons for why this action was taken. I’ve made repeated formal requests. That story, as recorded so far, is accessible here.
No part of the story of the UN Flag suggests disrespect of the U.S. flag.
They just took the flag down, and none of the Commissioners are talking about why, which is other than the reason given with the motion. The silence seems coordinated – “wagons in a circle”.
As we all know, on this particular 9-11, the dominant world talk is about the poison gas tragedy in Syria, and about the possible utility of the United Nations community in doing some of the essential heavy lifting to solve a problem no country can solve itself. The UN is a potential asset to the United States, and the rest of the world, not a liability or embarrassment.
And that U.S. flag, likely mounted post 9-11-01, is a reminder on this 12th anniversary of (in my opinion) excessive remembering of a past tragedy we experienced in the U.S., to remember as well that large numbers of the casualties 9-11-01 were from other countries; and that our response to the tragedy of 9-11 later brought pain and death to far more people in Iraq and Afghanistan, than we suffered here.
We need to reflect on that, too.
Comment from John N, Bloomington MN: That’s a great post Dick. Thanks for sharing. As for the big flag…does a symbol lose its value when nobody knows what it symbolizes?
https://thoughtstowardsabetterworld.org/wp-content/uploads/2022/04/thoughts-300x138-1.jpg 0 0 dickbernard https://thoughtstowardsabetterworld.org/wp-content/uploads/2022/04/thoughts-300x138-1.jpg dickbernard2013-09-11 02:24:092013-09-11 02:24:09#772 – Dick Bernard: An American Flag, and a message on 9-11-13.

Nine days from now is the Anniversary-Impossible-to-Forget: 9-11-01.
I have been preparing my own reflection that I’ll publish next Thursday in this space. It is basically complete, and I doubt it will change, much, in the next few days.
But it has been a real struggle to compose.
Next weeks post will begin with two photographs I took of the World Trade Centers at the end of June, 1972.
I was in a new job, enroute to my first Convention in then-seedy Atlantic City NJ, and we made it into a family trip from Minnesota which took us to places like Montreal, coastal Maine, Boston, Old Sturbridge Village, New York and, finally, Philadelphia. We saw much of American history in that trip. The family flew west from Philly, and I went to my Convention, and on to a 27 year career with my new employer.
The World Trade Center Twin Towers that June looked essentially identical to how they looked for the next 28 years. The complex itself was not yet complete. Wikipedia: “Ground-breaking for the World Trade Center took place on August 5, 1966. The North Tower was completed in December, 1972, and the South Tower was finished in July, 1973.”
Twenty-eight years elapsed.
Then came September 11, 2001 and the ten long years that have followed…years where we compounded their destruction thousands of times over. The World Trade Center became a symbol of and justification for never-ending-War.
I’ll talk more about those ten years next week, but in the interim it seems worthwhile to reflect on what has happened to us as a people between WTC ground-breaking in 1966, and today, 45 years later.
In my opinion, there has been a profound change in “we, the people”, and it is a very negative and self-destructive one.
In so many ways we have dis-honored the memory of those who died September 11, 2001.
We have been killing ourselves.
In following days there will be endless news about 9-11.
On September 11, on the site of the former towers, a new Place of Peace is to be dedicated. Let’s work to make what was turned into a symbol for War 10 years ago into what it is now said to symbolize: a Place of Peace.
I’d suggest we individually reflect on what has happened to us as a people since those Twin Towers began to take shape 45 years ago, and even more important what has happened since they were destroyed 10 years ago. I’d suggest we each become the change we wish to see in this world.
More on this topic at this space, including the photos, on September 9, 2011.